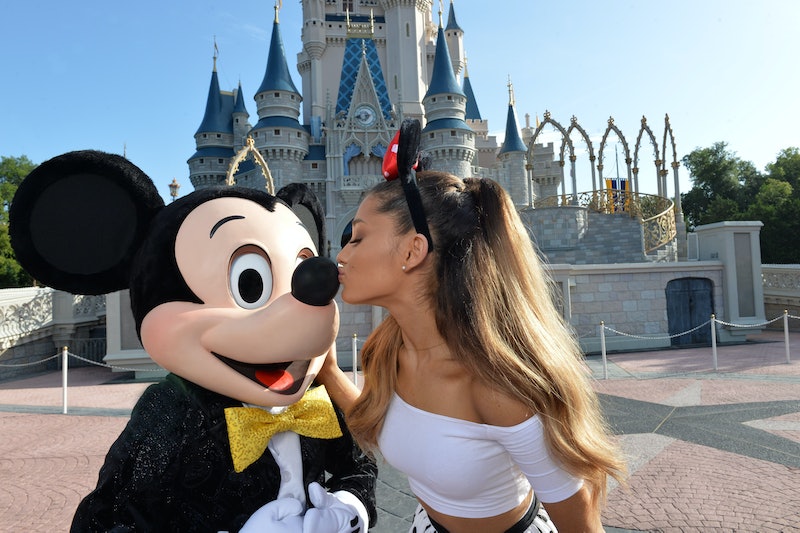 If that headline made you raise your eyebrows in confusion, then the whole story might just blow your mind. Or not. We all know that Lorde is curating the Mockingjay soundtrack and she has released her own track, "Yellow Flicker Beat", which was just basically everything. Everyone else go home, because I don't need any song but that. However, it turns out that there was a surprise artist on the soundtrack this time around. Yes, Ariana Grande has a song on the Mockingjay soundtrack, but is that really as weird as you think?

I can shut down this entire debate right now by pointing out that Taylor Swift was on The Hunger Games soundtrack. Remember? The same girl who rose to mainstream fame singing the fairy tale-inspired song "Love Story" dropped a track for The Hunger Games that was haunting and beautiful. In light of that, is it really any surprise that Grande is getting her chance to dip her toes into a different aesthetic even if she's the type to wear cat ears in concert and kiss Mickey Mouse at Disneyland? However, it's not just the fact that she's following in the footsteps of previous artists who wouldn't usually be associated with The Hunger Games aesthetic that makes her a good fit. When you think about it, Grande is just perfect for this soundtrack.

First, let's talk about her interests. Grande is a noted fan of Halloween who has expressed in interviews that she could very well have grown up to be a serial killer. (You know, because her idea of a great birthday party at 5 years old was JAWS-themed.) Then there's the fact that Grande has always been more mature than her aesthetic would usually have you believe. Even while she was playing the role of Cat Valentine on the Nickelodeon children's shows Victorious and Sam & Cat, when the time came for the pop star to release her first album, it was R&B flavored and very, very sultry, featuring such explicit rappers as Mac Miller and Big Sean. She even did a track with Iggy Azalea without compromising her intrinsic self. Musically, she can do anything.

According to Grande, her song for Mockingjay is "interesting" and "different", as well as being a collaboration with Lorde and producer Diplo. That's all the evidence I need that this could be an entirely new side of Grande that we haven't seen before. After all, the themes of Lorde's music and the themes of Grande's music don't actually mesh together — Grande is more about soulful love songs than she is about Lorde's anti-establishment, disenfranchised youth of the world songs — so seeing their styles blend together into one track will be nothing short of amazing.