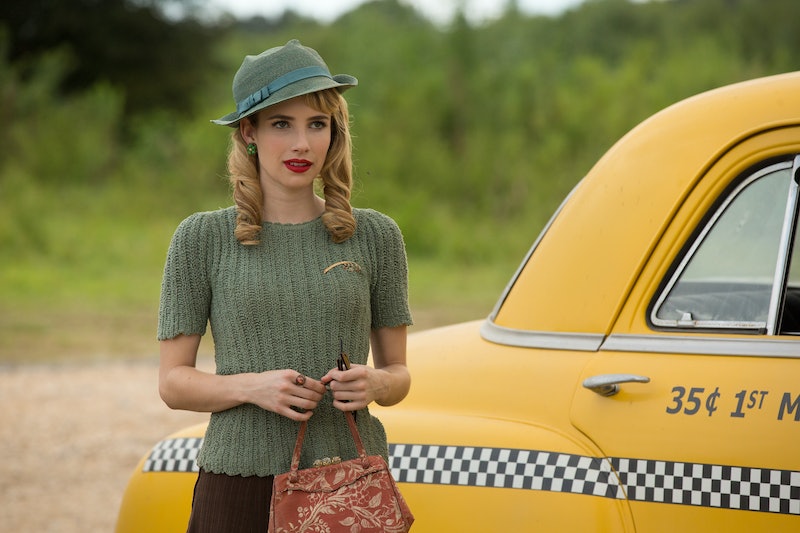 Could this be the beginning of a beautiful thing or will it just end badly for everyone involved? Last Wednesday, Emma Roberts made her AHS: Freak Show debut, finally, as fortune teller Maggie Esmerelda. Which means everything if you're one of those AHS fans that live for the flickers of romance the series provides each season. Because Maggie's entrance marks the beginning of Maggie and Jimmy Darling's impending romance. Aka some serious onscreen chemistry between Emma Roberts and her real life fiancé Evan Peters. Swoon.

OK, does anyone else feel kind of uncomfortable discussing romance on AHS: Freak Show? You know, considering Twisty the Clown and Dandy are terrorizing Jupiter and the surrounding areas, hacking people up and stealing children and all? Or how about the fact that we know that Roberts' Maggie is bringing a whole slew of trouble for Elsa Mars and "the freaks" in her wake? If you didn't feel uncomfortable before, you do now — I refuse to go through this feeling alone. But we do, in fact, need to talk about Jimmy Darling and Maggie Esmerelda's impending AHS romance because it's going to be a huge jumping off point for this season of AHS.

Now, I've been flip-flopping on whether it's a great or terrible idea ever since it was confirmed that Roberts' and Peters' characters would get together on Freak Show. But, while I selfishly want to see Roberts and Peters interact romantically for real this season (their interactions on Coven don't count because Peters was a partially coherent zombie), the cons of Maggie and Jimmy's relationship might actually outweigh the pros.

They're A Couple IRL

Roberts and Peters got engaged in January 2014, but they'd been together for awhile before that. Their natural attraction and chemistry IRL will obviously lend a level of authenticity to Jimmy and Maggie getting together because, well, they actually love each other offscreen.

It's Been A Long Time Coming

We've seen Peters' characters on AHS get romantic over the earlier three seasons, but never with Roberts. During AHS: Coven was the closest fans got to seeing Peters and Roberts love it up onscreen, but his character ultimately ended up with Taissa Farmiga. So, for all of us diehard fans of these two being a generally adorable couple, we've been waiting a long time for Roberts and Peters to show their love onscreen. Whether or not it'll actually make AHS fans happy is another story — but it will finally be happening, which is a pro in my book.

So far on Freak Show, Jimmy's been attempting to start a crusade to assimilate "the freaks" into the surrounding community. It's been a disaster and a failure, but an attempt nonetheless. And, even though Jimmy's generally accepted by the "typical housewife" community in Jupiter (seriously, I'm never looking at lobster the same again), he still doesn't feel like he's being treated like a "normal person." Even though he is one. In the season premiere we saw him chatting up some girl in a diner before Elsa put a stop to it, asking him what would happen when she realized what he truly was, so a relationship with Roberts, who may or may not really be a fortune teller, might finally give him the acceptance he craves.

Ryan Murphy might have said that Jimmy isn't interested in Dot romantically, but he did confirm that Dot is interested in Jimmy that way. And it'll be interesting to see how this triangle will play out in Freak Show — especially because we're well aware of Dot's murderous streak and the fact that she's willing to kill her sister to have a "normal" life. I can't imagine that she'll react well to Jimmy getting romantic with a plain, old, one-headed girl like Maggie.

But What About Dot?

I don't know exactly what to make of Dot just yet. But I do know that her pseudo-romantic relationship with Jimmy, whether it be all in her mind or not, has created an interesting dynamic on Freak Show. And, while I think Dot is ruthless and evil, it'll be disappointing if it turns out that Jimmy's kind of been leading her on with his "come hither" eyes. No one deserves that.

This could go either way, hence why Jimmy's feelings appear on both the pros and cons list when it comes to his relationship with Maggie. From Roberts' debut appearance last Wednesday, we learned that she doesn't exactly feel at home with "the freaks." Actually, she kind of hates being there because they (pun intended) freak her out and she can't even close her eyes without seeing them. That's not exactly a great attitude to have when your future boyfriend happens to have two lobster-like appendages for hands. Maggie could, instead of embracing Jimmy, make it a point to keep him a peg beneath her by acknowledging his physical appearance. It'd be pretty shitty, but Maggie's clearly not that accepting to be above doing so.

Maggie Is A Fraud

I mean, she came to Elsa's freak show, claiming to be a fortune teller, but really with an agenda to help out Denis O'Hare's Stanley. Yes, the plan will ultimately backfire and she'll see the error of her ways, but she's still a fraud with bad intentions. And that's not exactly a good base to build a relationship on, especially with someone like Jimmy who's already got such a bleak view on the world and people outside of Elsa's show.

I mean, Ethel is ill and just got news that she's going to die. If her death happens during the series and coincides with Jimmy's relationship with Maggie, she could very well convince him to leave the freak show behind and start a new life with her. Sure, it'd be a happy ending for Jimmy, who's been searching for and seeking acceptance in the outside world. But what about "the freaks"? These people are his friends and the freak show is his home and they obviously need his leadership (even if he's already led them in one bad direction). Ethel would want him to have a better life, but he can't just leave these people behind.

Jimmy Could Get Hurt

The promo that introduced Maggie and Stanley to AHS, revealed that bad things are going to start happening the men and women of Elsa's show, possibly at the hand of Stanley. What if, by starting a relationship with Maggie, Jimmy ends up falling victim to one of these experiments as well? I don't think my devotion to Evan Peters could stand to see that, even for a second (and I watched him get put back together like Frankenstein on Coven). The potential danger that a relationship with Maggie could put him in is the ultimate con — even if Maggie sees the error in her ways and tries to ditch Stanley, he could absolutely take advantage of her situation and punish her by experimenting on Jimmy. And that'd be extremely uncool.