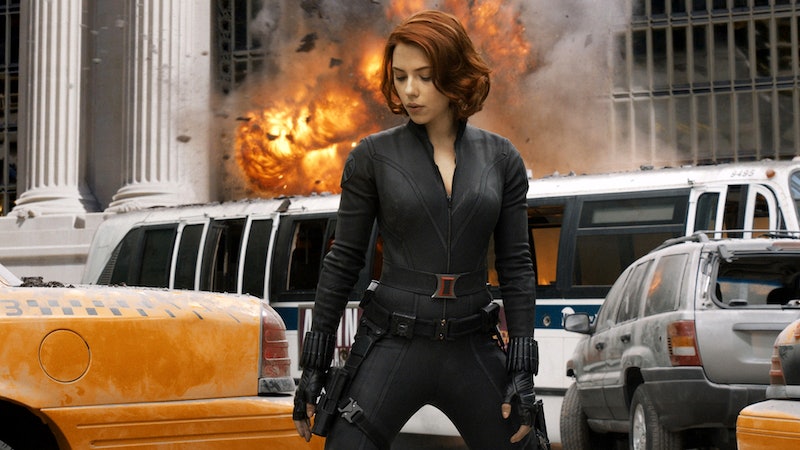 Amid all the excitement garnered by Marvel’s revelations of Black Panther casting, Captain America subtitles, two-part Avengers finales, and a never-thought-I’d-see-the-day Captain Marvel picture, I almost forgot to be disappointed over Phase III’s complete lack of Black Widow movie. Marvel Studios took to Hollywood’s El Capitan Theater on Tuesday to present its third league of films, a stretch to begin in May of 2016 (following next year’s release of Avengers: Age of Ultron and Ant-Man) and continue through ’19. And while the announcement offered a particularly attractive basket of titles, the absence of a standalone feature for Scarlett Johansson’s superspy, S.H.I.E.L.D. agent, and Avenger is particularly disappointing for a number of reasons.

Though Marvel has a winning character with Black Widow and a proven audience favorite with the talented Scarlett Johansson (this summer's out-of-nowhere hit Lucy is proof enough of her box office appeal), the studio has all but delivered an outright scoff at the notion of a movie devoted solely to the character. While Cinematic Universe kingpin Kevin Feige might dance around an inscrutable void thereof with fancy footwork, promising interest in the prospect (or dubbing Captain America: The Winter Soldier enough of a Black Widow movie in its own right), we can see from Marvel’s five-year plan that no such entity exists on its list of priorities. And I’m wondering if Captain Marvel is being played as the studio’s get-out-of-jail-free card.

Though a Captain Marvel film is an exciting venture in its own right, it doesn’t “make up” for the absence of Natasha Romanoff’s spotlight… which might very well be what Marvel hopes it will do. A Carol Danvers flick does not fill the proverbial female-led movie quota, just as Black Panther’s announcement is only one step in the correction of the studio’s proclivity — and that of Hollywood in general — for blockbuster whitewashing.

Opting for Captain Marvel instead of, rather than in company with, a Black Widow endeavor slaps the former with a “token lady film” status, an injustice for all parties involved. In addition to leaving Black Widow without deserved exploration, Johansson without her rightful vehicle, and fans without the movie for which they long, it renders Captain Marvel more of a statement than a story. It will be tough, in approaching the film, to evade the booming calls from the Marvel throat: “This is what we have to say about women” — quite a heavy load to shoulder for whomever takes on the project — “This and this alone.”

This worry aside, excitement prevails over Captain Marvel. But it’s tough to be quite as excited by a nebulous entity, one only seen thus far in comic form, than by something for which we have tangible precedent. We know we love Black Widow, and we know we love Johansson’s take on the character. A perfect conduit of the sharp pen of Joss Whedon, the actress became an unexpected scene-stealer in The Avengers, managing a stronghold on audience attention despite keeping the company of bona fide superheroes. In fact, it is Black Widow’s capability to dub herself, and feel like, an equal party among a collection of alien gods, genetically-enhanced soldiers, and all-purpose cyborgs that makes her so appealing.

As the 2012 film engaged us with Johansson’s acerbic depiction of the adroit field agent, it probed our curiosity about the character — who was she really? Where had she come from? And what of all the regrettable red marks on her ledger?

Two years later, Captain America: Winter Soldier did well to further interest, highlighting a more dramatic edge to Natasha Romanoff and strengthening the severity attached to her many secrets… without giving any insight into what they might be, of course. Though arguably the most invigorating of the Avengers characters, Black Widow is the only one we know absolutely nothing about. Thus, she is the perfect candidate for a standalone movie… or so you’d think.