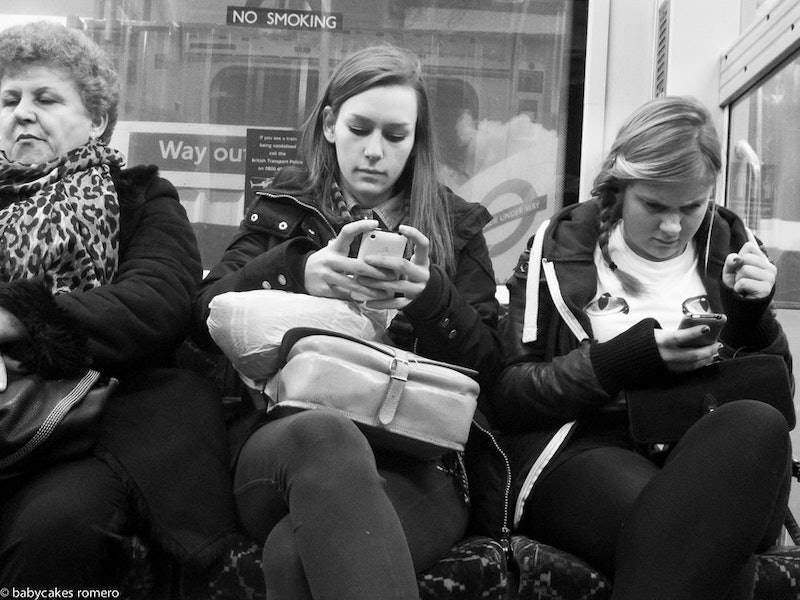 How far are you from your phone right now? You probably don't even have to look up from the screen to know. Odds are, if you're not as disorganized as I am, it is either on your person or several feet away, and without looking at it, you can rattle off every text or e-mail you've gotten as of ten minutes ago, which is apparently how often we check our phones on average. One stroll down a city street attempting to navigate through people with their noses buried into their screens can confirm all the research behind cell phone addiction. A recent photo series called "Death of a Conversation" by photographer Babycakes Romero sheds a grim light on the situation that we rarely think about when we're scrolling through our social media feeds.

Romero, who is based in London, took to the city streets to capture the phenomenon by photographing people of all ages and backgrounds being so engrossed with their phones that they ignore everyone around them. We've all been there: those days when you're waiting in line or taking the bus or on a break at work, swiping open your phone is so natural that it's almost thoughtless. We don't think about the world around us when we're in the bubble of our apps, but Romero's photos offer an outside perspective that shows us what we really look like when we're plugged in:

"I saw that smartphones were becoming a barrier to communication in person. I saw how people used it as a social prop, to hide their awkwardness, to fill the silence ... they basically allow people to withdraw rather than engage."

What's particularly unsettling about the photos Romero's examination of the concept of "togetherness". You see people with their families or their loved ones under an illusion of closeness because they are physically near them, but the very visible barrier of the cell phone screen makes them so separate that they might as well be on different planes of existence. One look at these photos is more than enough motivation to make sure you're unplugging and actually spending time with people you care about.