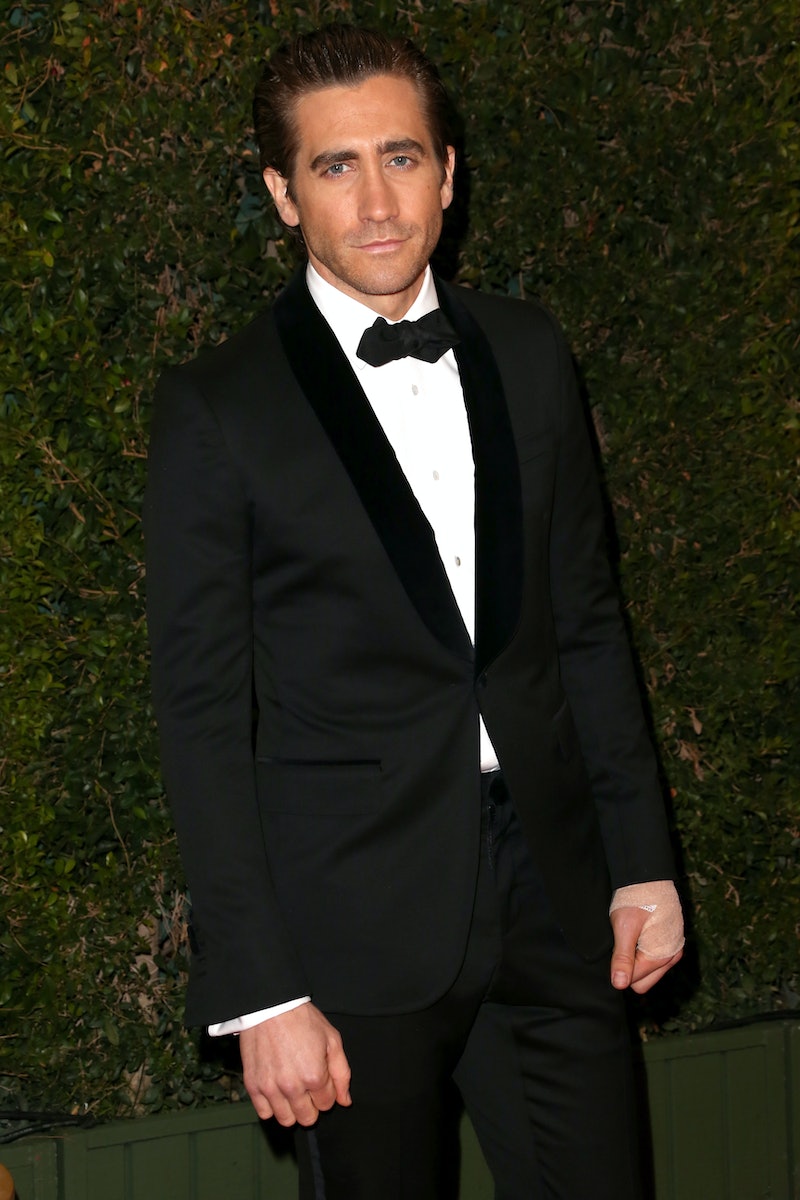 Do you remember Jake Gyllenhaal? It seems like the actor has been out of the public eye for forever and a day, which is far too long to go without seeing his perfect stubble, IMHO. Thankfully Ellen DeGeneres did the world a favor and graciously plucked Gyllenhaal from the cave he's been hiding in to help him promote his new movie, Nightcrawler, with an appearance on her talk show. The upcoming film, which is slated to be a dark crime drama, was the perfect excuse for DeGeneres to pull the prank that's now become her trademark: scaring the living hell out of her famous celebrity guests. And DeGeneres' prank on Jake Gyllenhaal didn't disappoint.

She started off the bit by having Gyllenhaal spill the reason behind his choice to always do intense thrillers. As he explained, "I have this belief that if you kind of go into the dark sometimes it can be illuminating. And I like those characters because they’re kind of fun to play, but I also think that there’s an opportunity..." But in the middle of his answer, a giant mutant Annabelle doll popped out: "Oh my god! What the f--k? We’re done. Where’s that guy bring him back! Has he been in there every show I’ve come on?"

Totally normal, right? For Gyllenhaal, not so much. Check out the normally subdued actor's hilarious reaction to the prank below:

Hold on. Just give me a minute to commit this picture to memory for all eternity. PRICELESS.

While DeGeneres' prank was drop dead funny, as usual, she definitely had a point. When it comes to the former teenage heartthrob's acting career, his movie roles of late have ebbed on the serious or sometimes scarier side. Which Gyllenhaal flicks freaked fans out the most? There are a few.

Between the giant bunny and bizarre series of accidents, the must-see movie that launched Gyllenhaal into the Hollywood stratosphere is 100 percent nightmare worthy.

The only thing scary about this movie is how awful it is. Sorry, Jake.

Just look at Jared Leto (Coachella Jesus, where art thou?). Look at Jake's weird goggles. Look at Selma Blair who's clearly thinking, "OMG what is happening, this is the most hellish situation I've ever been in." Honestly, I agree with her. The movie poster alone scarred me for life.

Alright, this movie is actually legitimately scary. Gyllenhaal plays a newspaper cartoonist on the hunt for a twisted serial killer, and to say the gruesome murder scenes will stick with you would be putting it lightly. *shudder*

So much terrifying dramz goes down between Gyllenhaal, Natalie Portman, and Tobey Maguire in this war thriller that it makes it almost impossible to focus on just how gorgeous Jake is. Emphasis on "almost."

His awful hair will haunt my nightmares for years to come.