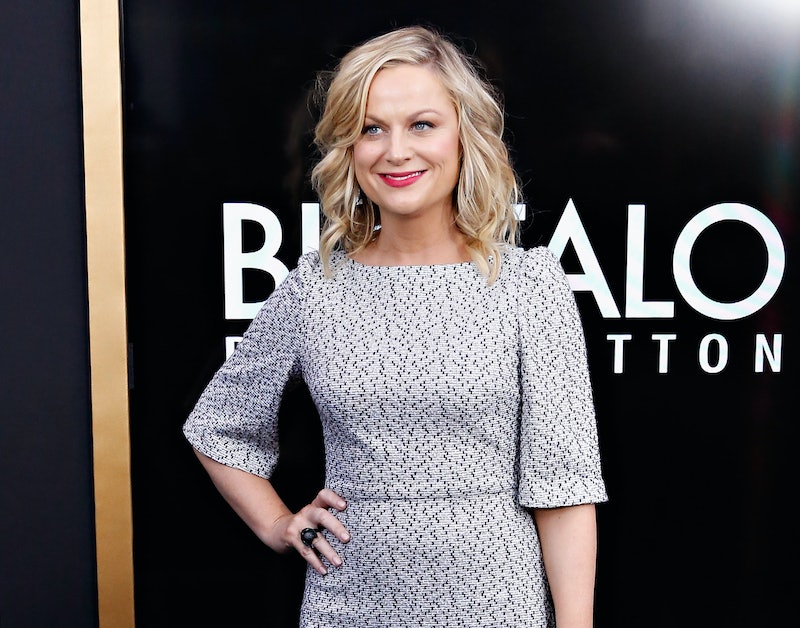 Bless press tours that send wise and wise-cracking women into conversations with the media. Yes Please, the first memoir by one Amy Poehler, is out now and being heavily promoted. With it has come many wonders, most recently Poehler's words on celebrity feminism and how we talk about it.

Poehler recently talked to Feminist.com founder Marianne Schnall at an AOL event, and she said some things worth listening to (emphasis mine):

This discussion — the media discussion of who is and isn’t a feminist — is yet another example of the media attempting to divide us, to take us and split us apart, and our view among each other. So it’s like, 'She said she was, she said she wasn’t, now she is, now she’s not, she made her one.' It’s just bullshit. It’s yet another attempt to get us to talk shit about each other, for people to bait you into [responding to] 'What do you think about so and so?

[...] First of all, it’s none of my business what they they want to say or do — that’s what feminism is. And also, what you believe or say at 20 is different at 40, is different at 60. I think as women, we need to continue to constantly celebrate what we have in common and share, and stop letting this society focus on how we’re different. It’s really frustrating. Yet again, the topic of feminism is another example of people co-oping it, taking it out of our hands, and we have to kind of take it back.

She's got a point. Yes, the discussion of feminism is important. Yes, it is valid to evaluate the people around at least partially through how much effort they put into seeing half the populations as equal humans to the other half, especially potential companions. And yes, celebrity culture has trained us to think of celebs as constant potential companions and to evaluate them as such.

But that last part's pure illusion. The words that celebrities say have an impact, sure, but we can't remove the middle-man from this equation: The way we frame the discussions of those celebrity words has an impact, too. And yes, when it comes to feminism these days the media response tends to be one with a knee-jerk reaction looking to put celebrities in different easily-defined categories. There are a number of reasons for this, varying from humanity's general love of the illusion of things being sorted, to the media tradition of playing up celebrity "feuds" as if they're Shakespearean instead of just common disagreement. And I say this as someone who writes as part of the media professionally: It's a trap many of us have fallen into both in and out of the press. It's the easy way.

Shailene Woodley said some things about feminism that were pretty ill-informed about the term, sure. Taylor Swift now considers herself a feminist and at least partially credits her interactions with vocal feminist Lena Dunham, sure — and don't even get me started on the whole conversation on who considers Dunham a feminist and who doesn't. Kristen Stewart commented that not considering yourself a feminist in this day and age is "a really ridiculous thing." Beyonce stood in front of a giant "FEMINIST" sign during a major performance, which was just whoa. Everything Nicki Minaj does or touches turns into a debate of what is feminist and what isn't.

These are all very different interactions with feminism, and all very understandable ones. As Poehler said, "what you believe or say at 20 is different at 40, is different at 60." Celebrities often find themselves painted into the easiest narratives we can find for them: The confessional pop princess with lots of boyfriends (Swift), for example, or the wood sprite who won't be confined by labels (Woodley). When it comes to feminism we spend so much time trying to stridently define what is or what isn't feminist — and that's an effort with a long and worthy history, and one that is constantly evolving. And it would be wonderful if we all started out equally educated and committed to it, but that is hardly the case, and that is something that extends far past the celebrity sphere. There is never going to be one 100 percent unified definition of feminism, because there is never going to be one homogenous definition of women.

The discussion of contemporary feminism is an important one, but there's probably a reason Swift's ~*feminist awakening*~ came from a friend, and not the collective yelling of twitter. If Woodley's headed towards the feminist light it'll probably be courtesy of Bell Hooks or her friend Brie Larson, not comments another actress made to The Daily Beast (about feminism in general, mind you, not even specifically about Woodley) or the grumblings of the blogosphere — and it'll be on her own timeline, not ours. It's important to remember: We have very little idea of what they're actually saying to each other about feminism; all we know is what they're saying to us whenever they're promoting something.

Discourse is important — but with the whittling down of that discussion into the illusion of infighting, who's actually winning here? It lays out a few sentences of ideology while stripping away the human behind them, and doesn't that defeat the very point?