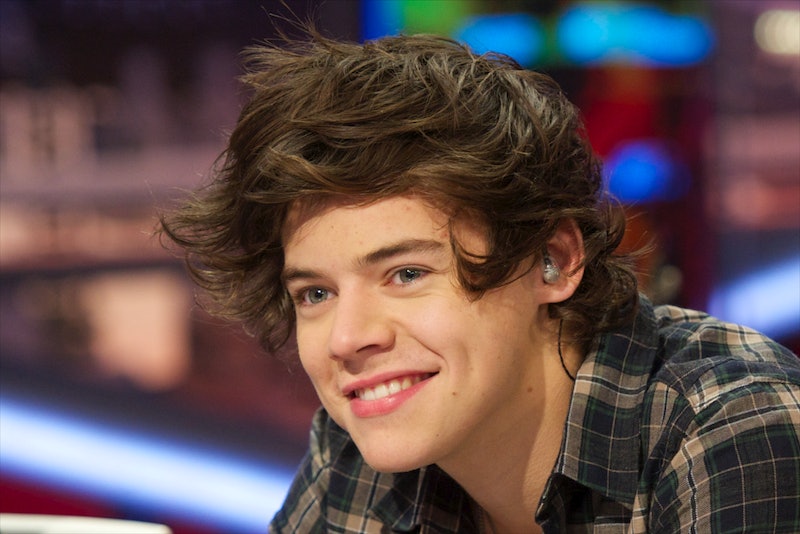 Oh, Harry Styles. You continue to be that bad boy we can't get away from because you're just so damn charming. His charisma and his brooding looks (and man-bun) have been the center of many ladies' affections and we've all gotten a little glance into his ways through subtle, or not-so-subtle, hints on Taylor Swift's new album, 1989. It seems like not many women in the biz are immune to his charms and there's no doubt that they equally love themselves some Harry Styles. In fact, supermodel Kate Moss was spotted with Styles on Tuesday night, and even she couldn't keep her hands to herself sitting next to the One Direction singer during an event to celebrate Annabel's, a legendary members-only club in London. (I guess they lost my invite in the mail.) Styles was probably the luckiest boy in the room, as Moss proceeded to give out some friendly kisses. On the cheek, of course!

Actually, now that I think of it, being surrounded by and flirting with really beautiful women is a very common and recurring theme in Styles' life — besides inspiring songs on record-breaking pop albums and all those other casual things. Here are some of the times Harry Styles has made the ladies crush, big time.

I really love these photos of Styles sitting front row at a Burberry fashion show because he is not only sitting between three giggling gorgeous women, but he is there to watch supermodel of the moment (and rumored GF at the time) Cara Delevingne. Afterwards, even Alexa Chung gushed, "I don't know what it is about that boy...he's just incredibly charming."

"But everyone has a crush. I mean, me and the whole music industry probably have a crush on Harry Styles! Everyone's acting like it's a shock, but I'm sorry, I think I'm just the only one admitting it! I like his hair! I just think he's funny and cute!" Ora told The Sun . Ain't no shame, girl.

In September, Katy Perry and Styles were seen leaving the same restaurant in Hollywood, which prompted speculation that they were dating. Although no one knows whether they actually ate together, Perry had previously shown a little love for Styles when she kissed him on stage at the 2012 MTV Music Awards. Could this have been the beginning of her and Taylor Swift's "bad blood?"

That time Emma Roberts admitted to her obsession

That time he actually kept Rihanna's attention during the VMA's

In an otherwise uneventful show, where Styles was more concerned with eating an orange, queen Rihanna herself shared a few moments with him and posed for a super cute pic while he was sitting behind her (peeling his orange.) Rih Rih eventually confessed her little crush on Styles, saying, "Harry, yeah. I watch their videos and I remember thinking, 'Wow, he's a star.' He seems very sure. It seems, like, it's so natural to him."