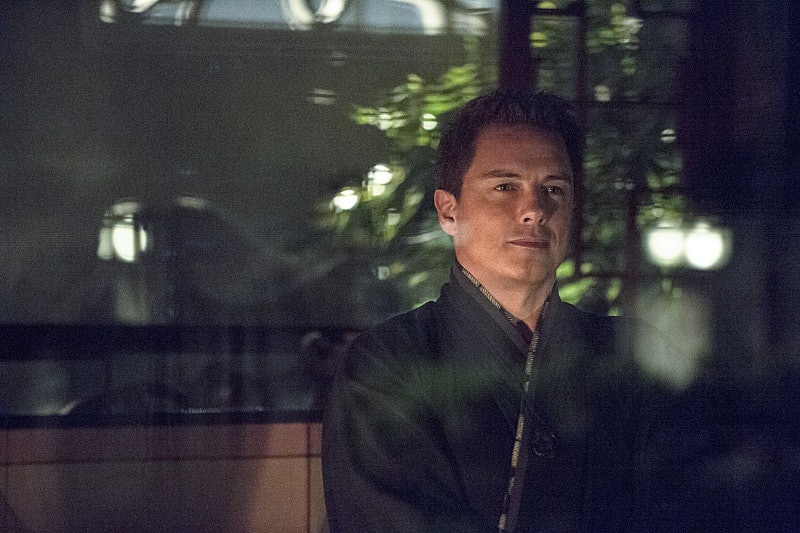 Ever since Arrow's epic third season premiered, the number one question on everyone's mind has been: who killed Sara Lance? And while we still don't know the answer to that for sure, we can at least start crossing off people on that list, starting with the Dark Archer himself, Malcolm Merlyn. No, as many of us suspected, Merlyn did not kill the Canary. However, Wednesday nights episode "The Magician" proved that he has a pretty good idea of who did. In a confrontation between Oliver and Nyssa, Merlyn pleads his case, even swearing on Thea's life that he did not commit this crime. Instead, he names Ra's al Ghul as Sara's killer. And if you think about it, it actually makes a lot of sense.

Nyssa informed Oliver that Sara's reason for returning to Starling City in the first place was because she'd been given an assignment from the League of Assassins to track Merlyn down and confirm that he was indeed still alive. And given that she was later shot to death with three arrows, it's understandable that most people would immediately jump to the conclusion that the Dark Archer was Sara's killer. I mean, it makes total sense, right? Almost too much sense.

In the world of Arrow, things are rarely as they seem. There's always somebody somewhere hiding secrets, double crossing, or even framing others for crimes they didn't commit. What if Ra's al Ghul set Merlyn up? Knowing that he had returned to Starling City, Ghul could've sent Sara after Merlyn and then killed her himself, using the same arrows that our devious archer would use. And since Sara had been tracking Merlyn's whereabouts, to an outsider it would look like the perfect motive for wanting to bring her down.

Merlyn also informed Nyssa that her father has doubted Sara's loyalties ever since she returned to the League. Not to mention the fact that he resented Sara for stealing his daughter's attention away from him. And if you recall, Sara seemed very surprised to see whoever was with her on that fatal rooftop. Almost as if she wasn't expecting that person to be in the city. All these signs lead to Ra's al Ghul's guilt. So for once in his life, Malcolm Merlyn may be speaking the truth.