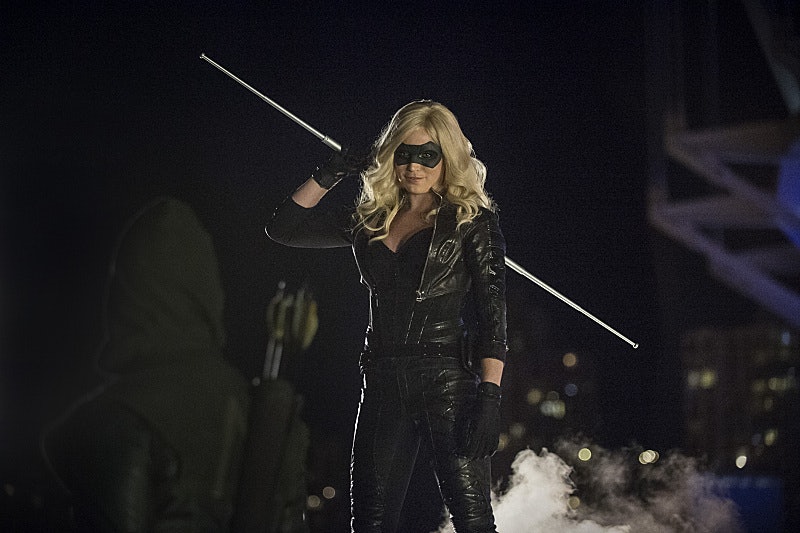 If you've managed to avoid spoilers for Arrow' s Season 3 premiere for an entire week, you probably deserve some sort of television medal. I am, however, going to spoil everything for you when I say that Sara Lance is dead. When I talked about ways for big sis Laurel Lance to assume the role of Black Canary, I suggested that Sara was going to have to die for it to happen. I was thinking maybe like, November sweeps. Mid-season finale. May sweeps. I was not thinking at minute 57 in the first episode back. You pulled the rug right out from under us, Team Arrow, and now you've left us with the bigger question of who killed Sara Lance? It's undoubtedly going to be the question that drives everyone for the next season (and also what drives Laurel to put on that leather crime-fighting jacket).

The obvious answer is the new big bad of season 3, Ra's Al Ghul, who we know has ties to Sara already. He's the leader of the League of Assassins, and Sara and his daughter, Nyssa, had a romantic relationship. It would make perfect sense for Ra's to be pissed at Sara for leaving the League — again. But did she actually do that? During her quick talk with Laurel, Sara doesn't admit what she's doing back in Starling City — just that she doesn't want their dad to know she's back. Sara could be home for any one of 100 reasons. If the League sent her to Starling City, it's doubtful that Ra's would follow her there just to kill her. He probably has way more important villain things to do.

Sara knows who shoots her. The voice says, "Hello, Sara" and she asks, "what are you doing here?" before she gets three arrows to her chest. The voice is low and raspy, but then again, Oliver can make his voice low and raspy too. We can't judge Sara's killer off of this voice alone. All we really know is that they're pretty good with a bow and arrow, and that Sara knows them. We have to look at all possible suspects. And there are a lot of them.

Who can eliminate as a suspect right away? Laurel, since she was there to witness the whole thing. Oliver, since he was meeting with Barry Allen (aside: how brilliant was that? The Flash is Arrow's alibi!). Detective Lance, since he didn't realize Sara was even in town (and doubtful she'd react to him with, "what are you doing here?"). Felicity, because we can't suspect Felicity, okay? Also, Diggle, because he just had a baby. That wouldn't be cool. Everyone else is a suspect. Let's break it down.

Ghul is the obvious answer. Yes, he's slated to be the bad guy of this season. There's a pretty good chance he followed Sara to Starling City just to finish her off once and for all. But we know nothing about him, other than the fact that he's the bad guy of this season. Maybe he's Oliver's bad guy, but he might not be Sara's bad guy. We don't know anything about their relationship, and would he really off Sara considering Nyssa? Maybe, maybe not. His bad guy stance doesn't necessarily make him her killer.

Ray is the new kid in town, and so far everything about him has been overblown and mysterious. He showed up with an ulterior motive, and he's already made Felicity mad. He might be taking a page right out of Isabel Rochev's book and only wants Queen Consolidated so he can destroy everything. Ray Palmer has always been a good guy in the comics, though he could turn bad. We don't even know if he'll actually turn into the Atom this season. If he doesn't start shrinking, maybe he's out to murder people? This could be the new direction for the character.

Hey, Wildcat. Thanks for showing up, we were seriously lacking abs. Wildcat's real name is Ted Grant, and he'll be played by J.R. Ramirez. In the comics, Wildcat is the guy who actually trained Black Canary to fight. He's supposedly going to train Laurel (because she's totally becoming Black Canary now). Maybe Wildcat also trained the former Black Canary too? Maybe they ended on not great terms. Maybe he's in town to destroy one Black Canary, and then help build another.

Vertigo is basically the Hyrda of Arrow. Cut off one head and another 35 grow. This Vertigo mantel will be passed from ruthless con to ruthless con, and maybe Sara met one and they simply didn't get along. One of them could very well have put a mark on her, and we just haven't met this Vertigo version yet.

Malcolm is the Dark Archer and Sara was shot with three arrows. While being around Malcolm could easily make Thea a sort of villain this season, I like to think Thea wouldn't do something so awful. Malcolm, however, absolutely would. How twisted would it be if Thea needed to prove her allegiance to her dad by killing someone Oliver loves?

What do we know about Amanda Waller? Oh, right, nothing. What's there to say that just like Waller found Oliver in Hong Kong, she found Sara somewhere too? Brought her in, trained her to do her mysterious bidding, and then didn't need her any more and got rid of her. We still don't know enough about her to figure out if she's good or bad for Team Arrow.

I hate to put Roy here, but where was he when Sara got shot? Does he have a solid story as to his whereabouts? It's probably not him, but I just want to get every possibility out there as we wait for Sara's killer to be brought to justice.

More like this
Keke Palmer Just Announced She's "Going To Be A Mom" On 'SNL'
By Brad Witter
The 'Kenan & Kel' Reunion On 'SNL' Took A Dramatic Turn, Thanks To Keke Palmer
By Brad Witter
This 'Derry Girls' Reunion Has Delighted Sister Michael Fans
By El Hunt
'SAS Rogue Heroes' Season 2 Is Set To Be An Explosive Watch
By Sophie McEvoy
Get Even More From Bustle — Sign Up For The Newsletter