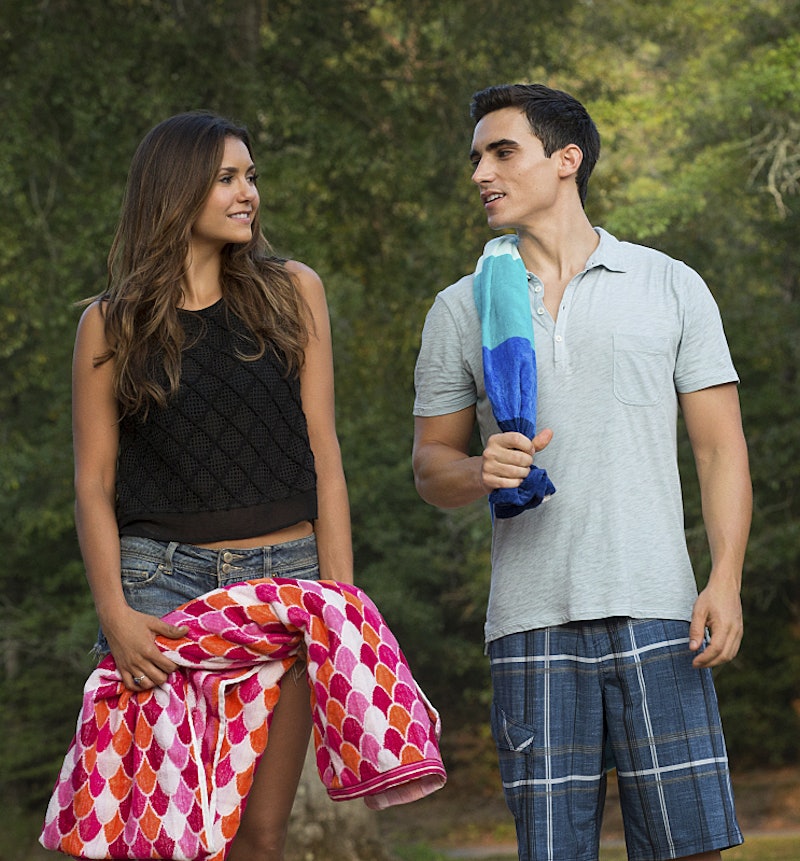 It’s been a particularly odd season even for The Vampire Diaries, and I’m not just referring to the fact that Damon and Bonnie are trapped in the year 1994. No, what I’m talking about are the relationship dynamics between our beloved cast members, all of which are so not heading in the direction I thought they would be. Caroline and Stefan are on the outs (at least for now); Damon and Bonnie are closer than ever before (still not sure how I feel about that TBH); then there’s Elena’s new love interest Liam, played by Marco James, who kissed her during that whole lake party thing in “Welcome to Paradise.” And the craziest part is, she actually looked like she enjoyed it.

I mean, not to sound biased or anything, but ELENA BELONGS WITH DAMON, DAMNIT! (OK, so that was a little biased.) Seriously though, it’s hard to really get onboard with any love interest in Elena’s life when we have the incredible chemistry she had with Damon to compare it to. But Julie Plec has proven on more than one occasion that she enjoys torturing TVD fans whenever she can, quite shamelessly might I add. And given that Liam is scheduled to appear in several more episodes, including Thursday night’s “The World Has Turned and Left Me Here,” I have a feeling these two are going to be continually thrown into each other’s path. Which is guaranteed to make Damon’s inevitable return all the more complicated.

But can a relationship between these two actually work? Personally, I think they were doomed right from the start. And here’s why.

Liam Is Just a Filler for Elena

Let’s face it — if Damon was still around Elena would not be giving this guy the time of day, so the fact that she’s tolerating his presence due to a lack of options rather than because she finds him genuinely interesting is very telling in and of itself. Sure, you could argue that she initiated talking to him shortly after Alaric memory swiped all of her Damon memories. However, I’d like to counter-argue that since Elena doesn’t have all of her memories in tact, she’s not really being her true self. And do we really think it’s good/healthy of her, or anyone for that matter, to start seeing someone when you're not being honest about who you really are? I think not.

His Manners Are a Little Lacking

Elena said it herself: it’s an automatic red flag when a guy kisses the girl who was trying to set him up with one of her best friends. And I couldn’t agree more. Some may see it as a bold, romantic gesture, but I found it completely shady. True, Caroline wasn’t interested in him one bit, but that’s no excuse to immediately lock lips with your matchmaker. It kind of gives off the impression that you’re 1.) extremely full of yourself and 2.) a bit of a player. Neither of which are very attractive qualities. Nor is the nickname "Cute Brag." Ugh.

Looking back on TVD’s pattern, the fact that Liam is human (as far as we know) could very well be a deal breaker for their relationship. Just look at poor Matt, for example. He’s one of the last full-fledge humans in the main cast and he always has the crappiest love life of the bunch. Aside from his European fling with Rebekah (which was way too short for my liking), he hasn’t had a lasting relationship since Caroline and that was all the way back in Season 2.

And while I’m no dating expert, the key to any successful relationship is usually centered around honesty. Something that is very hard to do when you can’t, for instance, tell the person you’re seeing that you’re actually a blood-sucking vampire who can live forever. You know, normal stuff like that.

And in all honesty, that alone should be reason enough.