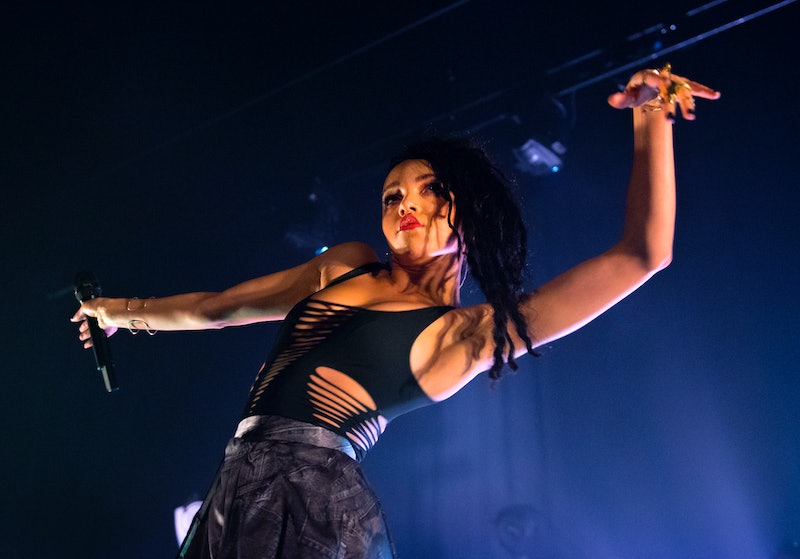 If you haven't yet heard, FKA Twigs is a musician who is dating Robert Pattinson. I hate to define any woman by who she happens to be sleeping with, but for the sake of practically, let's be honest: The only reason she's newsworthy right now is because she's recently been drawing the ire of Twihards everywhere. Which means there are at least one million sloppy voodoo curses placed by teenage girls and middle aged divorcées upon her. It also means that most people know FKA Twigs as Robert Pattinson's girlfriend rather than the extremely talented musician who just released this new video for her song "Video Girl." To put FKA Twigs in context for those of you who aren't familiar with her work yet, she's sort of like the new Grimes, except not white and much cooler. She wears that coolness very naturally, as though being cooler than Grimes was so easy she did it without even noticing. Apologies to Grimes, who is admittedly also quite cool.

"Video Girl" is a strange video, but it seems to be very trendy, and I can say "trendy" because I am not a very trendy person. It features Twigs dancing about in a prison where her prisoner boyfriend is on death row, which is potentially ominous for her actual boyfriend, teen heartthrob Edward Cullen (in the metaphorical sense that the video seems to suggest Twigs is powerless to stop both her seduction and destruction of men). The song itself is quite lovely and choral in parts, except for where there's a weird breakdown into a satanic voice that seems to posses Twigs as she writhes about in strange face jewelry.

About halfway through the video, the song becomes another song, and if I'm being completely honest, I'm not really sure I "get" any of this, which makes me feel like I am prematurely turning into my mother. Although to be fair, I am a person who believes "Teenage Dream" is potentially the greatest pop song ever written, which I've been told is incredibly low brow of me, insert expressive eye roll here, what about the Beatles, man? Anyway, "Video Girl" has one thing going for it, and that's that FKA Twigs is so beautiful, and moves like a silver ribbon floating on a breeze, it's difficult to look away from her, even with the lethal injection plot line. Watch below.