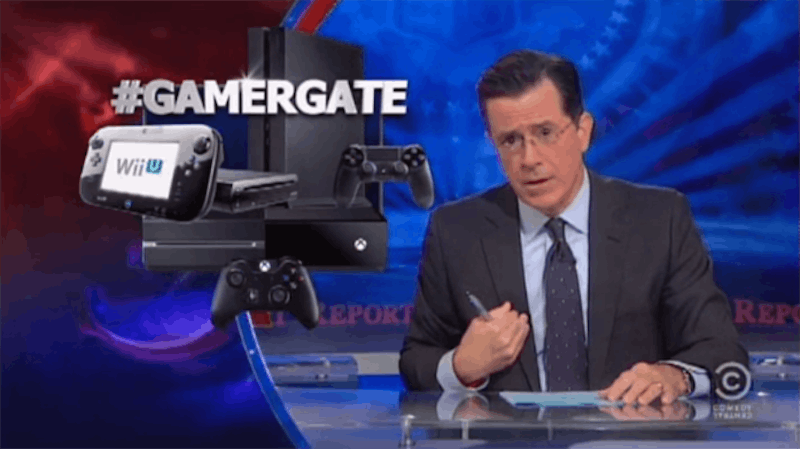 Despite the continual and brutal online harassment, one media critic is refusing to stop talking about sexism in the gamer world—and it's amazing. On Wednesday, Anita Sarkeesian discussed GamerGate on the Colbert Report and totally took the issue to task. In the first portion of the segment, Colbert explained the debate over women wanting less sexist and sexualized representations of themselves in video games, and went on to elucidate how the gaming community is responding with horribly violent harassment toward those women speaking up online. Sarkeesian has bore the brunt of those attacks, even being forced to leave her home for fear of someone taking their threats to action. But still, she won't stop the discussion because it's one that needs to be had.

Sarkeesian sat down with Colbert who asked hard-hitting questions, which on the surface seemed accusatory, but really opened up just how ridiculous a lot of this situation is. "Why can't women just have separate but equal games?" Colbert innocently asked, referring to the old "separate but equal" law that allowed for racial segregation.

Sarkeesian held firm on her position throughout the interview: This isn't about women trying to destroy the pastime, or "snip [men's] balls off and put them into tiny felt purses" as Colbert suggested.

Rather, she said, this is about how these "male fantasy games" consistently reinforce "this cultural myth that women are sexual objects and sexual playthings for male amusement and we're not ... maybe the princess shouldn't be a damsel and she could save herself," she said to huge audience approval.

Sarkeesian brilliantly handled all the joke accusations Colbert threw her way with grace and intelligence, and even helped Colbert see he was a feminist at the end of the segment. "Do you believe that women should have equal rights to men?" she asked him. When he said yes, she answered, "Great, then you're a feminist."

It really is that simple, folks.

The highlight of the video was when Sarkeesian shut down the lame theory that feminists, game designers, and the media are in cahoots to talk about this issue, leading to what a lot of people are claiming is a journalism ethics problem.

"We are talking about ethics in gamer journalism. Do you understand how huge that is? What if there were no ethics in Hollywood journalism?" Colbert said. "If we can't trust Entertainment Tonight or TMZ where would we be?"

But Sarkeesian had the perfect answer for the ethics in journalism debate.

I think that is a compelling way to reframe the fact that this is actually attacks on women. Ethics in journalism is not what's happening in any way. It's actually men going after women in really hostile and aggressive ways. That's what GamerGate is about. It's about terrorizing women for being involved in this industry and this hobby.