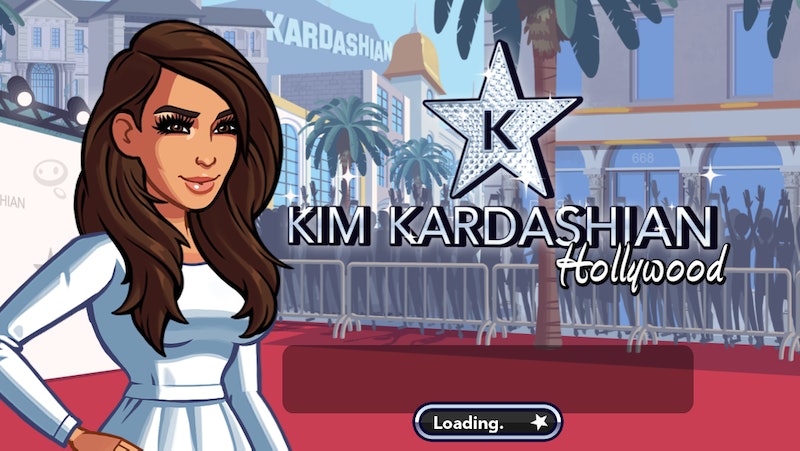 First comes love, then comes elaborate wedding in Florence, and then... babies? Yes, I'm still one of the many iPhone users that are still playing the Kardashian game — even though I got incredibly close to quitting when my avatar took forever to get married on Kim Kardashian: Hollywood . (She just got married earlier this week, by the way.) And now that I'm cruising through the KK: H honeymoon phase, I'm optimistic and fearful that I'll never be able to quit. Because, Kim Kardashian: Hollywood might add babies in one of its next updates and who doesn't want their own animated version of North West?

According to whispers, KK: H's resident gossip hound, Ray Powers might be hinting that KK: H is adding an option to start a family of your very own with your significant other (geographical name not included). Bustle editor and KK: H player Sam Rullo, received a message in her feed on the Kardashian game that read that she and her new spouse were the "couple of the year" and speculated that NEXT YEAR, they might be "parents of the year." (I have yet to receive this message, as I've only been married for, like, a minute.)

Now, I'm under no delusion that it'll be easy to secure a child on KK: H — I mean, it took me a damn long time to even get my significant other to propose AND before we could get married, I had to dispel two rounds of cheating rumors. (Total BS.) And, considering the Kardashian game is supposed to give fans a glimpse into the struggles of Kim Kardashian's fame, I'm entirely sure that being pregnant on KK: H will make you feel some serious sympathy for Kim. Ugh. So, what will having a baby be like on KK: H — here are some predictions: