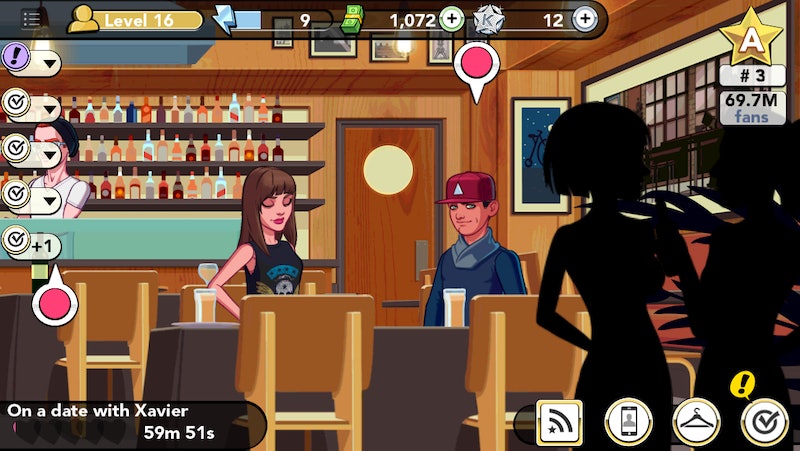 All too often, we're faced with that annoying question: "Can women have it all?" And oddly enough, the question is thrown in our face again, when playing Kim Kardashian's iPhone game. The game makes you choose between career and love. Look, I respect Kim Kardashian as a businesswoman (I mean, she made a game that got me more addicted than I've ever been to anything), and I also respect her as a wife and mother. Kardashian herself challenged the idea that women can't have babies and a career saying, “I think that’s just not really a positive outlook. My mom kind of taught us girls we could have it all." However, Kardashian doesn't want to extend that same benefit to the people playing Kim Kardashian: Hollywood.

Just as it made you do a nude photo shoot, the game continues to play by antiquated rules and stereotypes. While playing the game, I've noticed it makes you choose between dating someone and excelling in your career.

So far in my rise to stardom, I've avoided being in a relationship. Dating someone is expensive and if I accidentally ignore them because I'm on a photo shoot, they call me to break up. I can either "charm" them into staying (and waste my K stars) or I can accept the breakup. Guess which one I usually go with.

I'm convinced my quick rise to the A-List was achieved by cutting romance out of my life and only going on dates when my publicist absolutely forced me. You gain a lot more fans doing magazine covers than you do dating a C-list star.

But last week, I decided I'd give dating a try because I heard a rumor that you can go to your significant other's house if you date them long enough. As there are two locations in the game still locked on me despite my high ranking, I assumed this rumor was true and those locked locations were my dates' homes.

Curious to see what was behind those locked doors, I made my goal to date someone and let my work take a back seat for the day.

In the course of just a few hours, my fan count dropped drastically. All because I failed to do well at a couple of events.

So sue me, I was taking my S.O. out on a date, I can't be everywhere at once! Also there is not enough energy in the world to complete both a date and a job, and I refuse to spend money buying more. I'm playing this game the old fashioned way. And therefore, I had to choose what to spend my energy points on.

It's not just me who's run into this problem, either. A lot of Kim Kardashian: Hollywood players are complaining about this aspect of the game.

My refusal to spend real cash to get more energy quickly hurt me in the long run. I may have a budding relationship, but I'm still working my way back to my original 68.8 million fans.

Oh, and I haven't even gotten to go to my date's house yet. After I finished one of my dinner dates I was rewarded with a tweet from the in-game version of Ryan Seacrest saying, "I heard Alexa's glass house has been visited by Cassy... if you dig." Not only does that sound like a weird innuendo, but I didn't even get to have anyone come over to my house and I didn't get to go to anyone else's house! So I lost those millions of followers for nothing.

Am I going to break off my relationship, then? Honestly, probably not because at this point I've invested too much money, energy, and K stars. I am now one of those people who sees no future in a relationship but doesn't break it off because they're too far invested.

This game is making me hate myself, and it's also making me hate Kim a little bit because why is she putting so much pressure on me? Why can't I date and do well in my career? Why is it one or the other?

This game is supposed to be fun, and instead, it's throwing all sorts of moral dilemmas my way. It's hard enough to "have it all" in real life, so why does it have to be so hard in the digital world, too? Cut a girl a break, Kim.