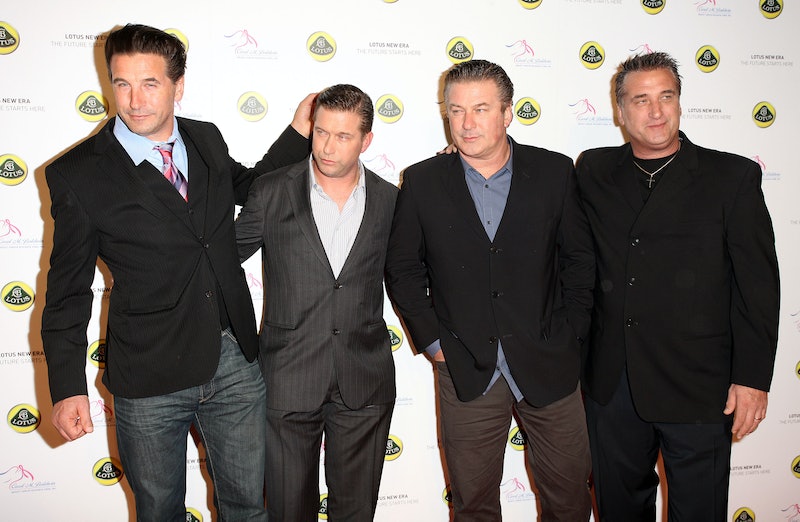 Would you read a tell-all book about the Baldwin family if it were available? No judging — just saying one might be available soon, so you should probably decide now. According to occasionally reputable source Radar Online, Joseph Edstrom, the dude who worked on founding the Carol M. Baldwin Breast Cancer Research Foundation in the '90s with Carol herself, teamed up with the foundation's former publicist Ellen Baron to release a tell-all book about the Baldwin family.

Setting aside what terrible people Edstrom and Baron are for releasing this book with the sole intentions of just banking off this family, this book sounds like it's going to be just as insane as the family is — even if they don't devote a whole chapter to Alec Baldwin's 2007 meltdown on daughter Ireland's voicemail where he called her a "rude, thoughtless little pig." This family is such a mess, it's a wonder they don't have their own reality show yet.

“When I saw [Kim's Oscar-winning performance in] L.A. Confidential with Carol, she spent the whole time during the movie putting down Kim,” he says. “But of course Kim won the Oscar.”

That's not even all, though — Edstrom sinks to his lowest when he describes how the book will delve into Daniel Baldwin's troubled life, and sort of "explain away" his drug problems:

“You all know the history of Daniel,” Edstrom says of his battles. “When you read the book, you’re gonna understand why he had so many problems.”

“This family is not the dynasty that everybody believes that they are,” he insists. “They’re trailer park trash. And if I’m complaining, there’s probably at least 30 or 40 people behind me that feel the same way!”

OK, all joking aside — Radar Online is not a source one should go to for quality news of any sort, so it says something that Edstrom went to them with his diabolical plans. Plus, consider the way he's talking; he's just looking to make bank on the backs of a rich family, which means he could be embellishing a lot just to get those readership numbers higher.

Take that as you will, everyone.