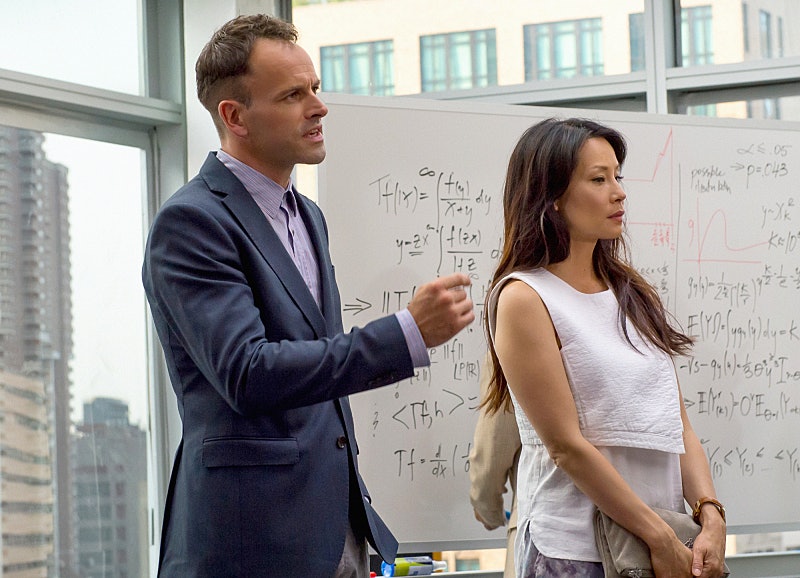 Remember back in 2012, before Season 1 of CBS's Elementary premiered, and everyone assumed it was a knock-off of BBC's Sherlock? You can understand the confusion in retrospect: both shows were adaptations of Sir Arthur Conan Doyle's classic stories that transplanted the acerbic but brilliant detective to modern times. So imagine everyone's surprise when Elementary turned out to be a decidedly different take on the source material — turns out there's room for more than one Sherlock Holmes in the world after all!

Now we're two seasons in, and we've gotten to see all the delightful ways in which Elementary has continued to distinguish itself. It takes place in New York City! Watson is a woman! Irene Adler and Moriarty are the same person! It's been fascinating to watch different actors explore unique interpretations of the same characters: Jonny Lee Miller vs. Benedict Cumberbatch, Lucy Liu vs. Martin Freeman, Rhys Ifans vs. Mark Gatiss (who also co-created the BBC version). There no longer has to be a war between Holmes fans on both sides of the pond — the two shows are now so different, it's easy to love them both.

Season 3 of Elementary premieres on Thursday, so just in case you forgot exactly what went down last year (or feel like you've started to confuse the two shows during their hiatuses), here's a quick refresher course on where we left off.

In the Season 2 premiere, "Step Nine," Holmes and Watson visited Sherlock's hometown to help his old friend, Scotland Yard inspector Gareth Lestrade, solve a particularly difficult case. (It ends up involving a gun manufactured in a 3D printer and then melted in acetone.) While there, they also run into Sherlock's brother Mycroft, who has moved into Sherlock's old flat at 221B Baker Street. Mycroft makes an effort to repair their estranged relationship by — of all things — blowing up his brother's storage locker full of his old belongings.

In the episode "Tremors," Det. Bell was shot when he jumped in front of a bullet to save Holmes after he antagonized a suspect so much the man tried to kill him. Sherlock is put on trial to determine whether or not he should continue his work as a consultant to the NYPD, and while Bell testifies on his behalf, he struggles to forgive Sherlock personally.

In the episode "The Diabolical Kind," Sherlock's nemesis Irene Adler/Jamie Moriarty resurfaces, being held prisoner in a federal black site. Sherlock and Holmes go to her when a man they recognize as one of her lieutenant's kidnaps a girl and demands a ransom. They assume Moriarty was behind it, but she turns out to be the victim: the kidnapped girl is Moriarty's own daughter, Kate. Moriarty escapes custody long enough to subdue the abductors and rescue her daughter, before allowing herself to be re-captured.

Throughout Season 2, Joan continues to sharpen her detective skills, and in the episode "Dead Clade Walking," she actually reopens one of Sherlock's old unsolved cases and manages to solve it herself, involving rocks, fossils, and geology.

Lestrade moves to the Big Apple

While investigating an explosion at a high-end restaurant in "The One Percent Solution," Holmes and Watson run into Lestrade, who has moved to NYC and is working as a "security czar" for a CEO. Throughout the investigation, it appears that Lestrade may have been involved in the bombing; although he turns out to be innocent, he does lose his job and consequently moves in with the two detectives.

Earlier in the season, Mycroft had opened a restaurant in Manhattan, and he and Joan struck up an unexpected flirtation. But when she notices some unsavory types in his eatery and attempts to follow them, she ends up getting taken hostage. Her kidnappers demand a list of the names and information of a Swiss bank's 1000 wealthiest customers, or Watson would be killed in 48 hours.

Mycroft personally takes the list to the henchmen to save Joan's life, although the criminals are about to kill them anyway. Mycroft's final words are "Paint It Black," and suddenly snipers take out the whole gang. Turns out, Mycroft is with MI-6 (and has been for the past 10 years), and this whole operation was a sting to wipe out that particular criminal organization. MI-6 then hires Sherlock to solve the murder of one of their own operatives. Mycroft ends up being framed for the crime, although Holmes eventually finds the real mole and clears his brother's name.

Due to rising tensions over her relationship with Mycroft, as well as her constantly feeling overshadowed by her partner, Joan finally decides to move out of her shared apartment with Sherlock. The Season 2 finale, "The Grand Experiment," ends with Watson on the phone with a broker, finding herself a new place to live. Holmes responds by taking out a secret stash of heroin and putting it in his pocket. Thankful for his help uncovering the mole, MI-6 bigwig Sir Walter offers Sherlock a permanent position with the intelligence organization. Sherlock accepts.

And there you have it! So many questions going into Season 3: What is Elementary going to look like with Holmes and Watson living apart? Is Sherlock going to be happy working for MI-6? Will Joan be able to save him from a relapse? We'll have to wait until the season premiere to find out, but for now, the preview for "Enough Nemesis To Go Around" below should help hold you over.

More like this
Everything You Need To Remember Before Westworld Season 4
By Brad Witter
'Abbott Elementary' Season 2 Premieres Right On Time For The New School Year
By Alyssa Lapid
Why Simone Ashley Had To Study Snails For Intimacy Training, Pre-‘Bridgerton’
By Grace Wehniainen
James Marsden Kept Teddy’s Westworld Season 4 Return A Secret “For Years”
By Brad Witter
Get Even More From Bustle — Sign Up For The Newsletter