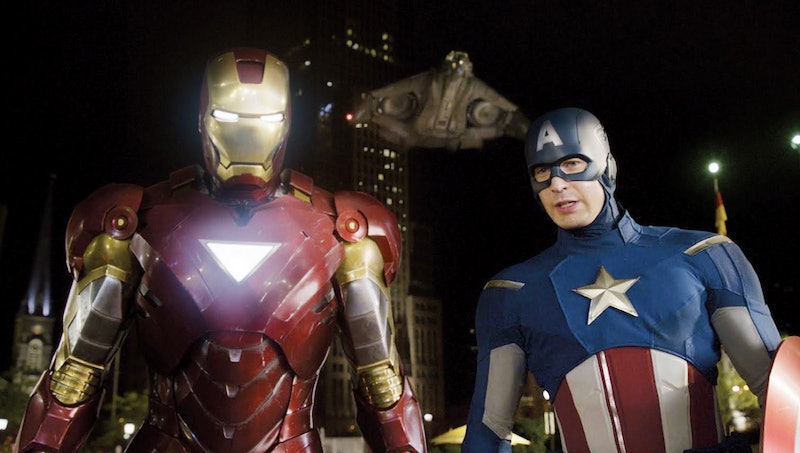 Interested in seeing Chris Evans' Steve Rogers rip apart a log with his bare hands? Step right up, because Marvel's got ya covered. The newest (leaked) clips from Avengers: Age Of Ultron features Steve and teammate/Iron Man Tony Stark having a bit of a disagreement over how and why superheroes should fight. They do so while chopping lumber, but the elephant standing to the side of this clip isn't the outdoorsy activity — it's the fact that these particular superheroes will fight, come May 6, 2016.

Yep, this clip — which was shown as part of Marvel's big live event this Tuesday, and has been leaked out into the world until they decide to snatch it from us — confirms that, yeah, we'll be getting a lot of that Civil War dynamic long before Captain America: Civil War actually hits theaters. Age Of Ultron has a lot on its shoulders, I gotta say: Ant-Man may be able to drop some hints, but Ultron's got a ton to introduce before Civil War even begins to make sense. And that's with the assumption that Marvel's gonna have to change up the bulk of the story in the first place, considering they can't get their hands on the rights to Spider-Man.

One thing appears clear at this point: Tony and Steve will not be hunky-dory bonded superhusbands in Age Of Ultron. Apparently that's just not Whedon's jam, which seems like it'll be a shame when it comes to the emotional stakes of Civil War, but I suppose we'll cross that bridge when we get to it. As for the Tony/Steve dynamic right now? They still seem to not really understand each other, and are expressing that not through friendship, but through the aforementioned log-ripping.

It really does make ya wish Peter Parker was there.