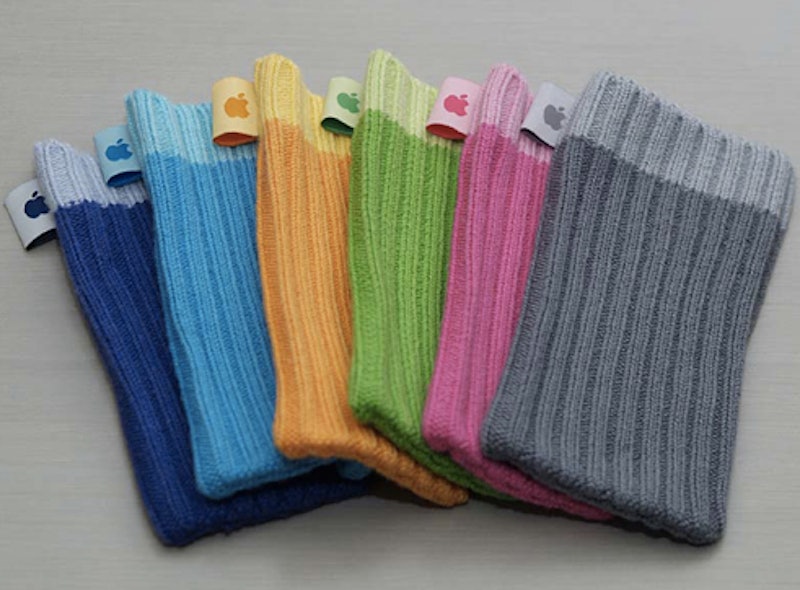 The world is getting smaller, and so are our devices. Gone is the behemoth 6.5 ounce (seriously, nearly half a pound) original iPod, and in its place, we have the 0.44 ounce (less than a tenth the original's weight) iPod shuffle. Gone is the bulky Clamshell iBook, and here to stay is the ever-shrinking Macbook Air, which will soon be lighter than the bag you carry it in. And as Apple has evolved, it has not only downplayed size and discontinued the iPod classic, but also opted for a more minimalist aesthetic, abandoning some of our favorite iPod accessories — namely, the iPod sock.

As much as I appreciate Apple's continuous race to the bottom in terms of size and color schemes, it was much more difficult for me to lose my devices when they were bigger than animal crackers and adorned with cute iPod sweaters. I mean, come on, who could possibly misplace an iPod enveloped in a brightly colored knit sock? And better yet, when you bought one these handy dandy iPod carriers, whose practical purpose promised to protect your music player from unwanted scratches, you didn't just get one sock — you got six! Our society has clearly become stingier and stingier in the procurement of clever iPod cases, as today, buying an Otterbox means just getting one Otterbox. And as anyone with an Otterbox will tell you, a single Otterbox never does the job correctly.

So let's take a look back at our favorite old iPod accessory, and maybe a few others as well.

Your feet weren't the only thing that needed to be kept warm on a cold, winter's day. These iPod socks were cozy enough to melt the hearts of even the coldest inanimate devices, the original iPod included. These socks were probably the originators of a bizarre trend in iPod accessorizing that attempted to make Apple devices look, for lack of a better word, cuddly. We treated our iPods like we treated our toy chihuahuas, putting them in sweaters, bedazzling their collars (or their cases, as it were), and toting them around in our bags just hoping that someone would notice how fashionable our accessories were.

For the bargain price of $29 for six iPod socks, or about $5 each, your iPod could function as a high tech mood ring, reflecting your daily outlook on life through its brightly colored knit threads. With delightful hues of goldenrod, pink, blue, green, purple, and the classic Apple grey, your iPod was sure to be the coziest and the most fashionable device at the party in one of these babies.

And better yet, with the mammoth size of the original iPod, your iPod sock could easily double as, maybe, an inconvenient oven mitt, or a baby's sock! Multi-functionality is all the rage with Apple these days, and it all started with their most beloved accessory.

So popular were these socks, in fact, that people actually began making their own at home, which became even more necessary when Apple pulled the socks from their shelves back in 2012 after eight years on the market. To be perfectly honest, Apple may as well have pulled the plug on the original iPod back then too — after all, what's an original iPod without its complementary sock?

The iPod sock making process, for those of you still interested in keeping your iPods scratch-free and warm, is actually quite simple. It all starts, surprisingly enough, with a sock. Cut off the portion of the sock below the ankle, stitch the bottom together, and attach a button or some velcro to the top for security, and voila! This is considerably more cost-effective than trying to buy the discontinued iPod socks, as a new package of those on Amazon will now run you 90 bucks. Yes, $15 today will buy you the equivalent of half a sock.

It may be a bit large for your iPod Nano or your Shuffle, but hey, these things would still work phenomenally for your iPod Touch or your iPhones, provided you're OK with pulling out a sock every time someone tries to call you. But hey, stranger things have happened — high-waisted shorts, after all, made a reappearance.

Of course, in retrospect, keeping your iPod warm might not have been the best idea on the planet, considering that operating an Apple device at over 95 degrees could lead to a shortened battery device or other malfunctions. But hey, those sweaters definitely gave the original iPod a much needed dose of color, and besides, everyone had one.

Speaking of color, there were also those ridiculously inconvenient bedazzled iPhone cases that not only were adorned with every faux gemstone created by man, but also featured protrusions that frankly, could probably be used as a defensive weapon. Seriously, how were you supposed to hold your phone, or ever put it down face-up?

If you wanted an additional workout to go with your daily run, all you needed to do was strap a couple original iPods to your arms. Of course, the original iPod was so large that taking one for a run was a bicep exercise all its own, and attaching it to your body seemed like a somewhat precarious move. But hey, people did it, and it was still better than a walkman.

More like this
The 7 Best Laptop Stands For Zoom Meetings
By Megan Gray
The 8 Best Headphones For Pelotons
By Megan Gray
The 5 Best Bluetooth Label Makers For Your Home, Office & Beyond
By Rachel Dunkel
20 Smart Devices Under $35 That’ll Change The Entire Vibe Of Your Home
By Emma Carey
Get Even More From Bustle — Sign Up For The Newsletter