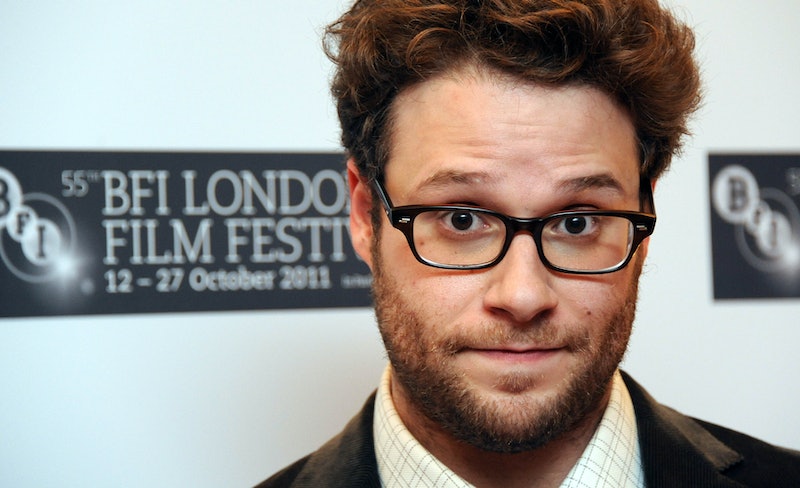 Seth Rogen is usually synonymous with one thing in Hollywood: blockbuster stoner comedies. Though the 32-year-old actor has made a huge career for himself writing, producing, directing, and starring in comedies that are full of profanity, sarcasm, the occasional boob, and plenty of guys with a bigger Peter Pan complex than Peter Pan himself. But it's looking like Seth Rogen might soon have his "moment," according to The Hollywood Reporter. The producers of the upcoming Steve Jobs biopic, directed by Danny Boyle are eyeing Rogen for the role of Steve Wozniak, Apple co-founder and computer pioneer. You might be thinking, "Oh no, please don't become another Jonah Hill," but there's more to Rogen than Knocked-Up.

His most notable foray into drama was in the 2011 heartbreaker 50/50 with Joseph Gordon-Levitt. He played the best friend of a young man battling a very serious form of cancer. Rogen's performance had touches of his typical eye-rolling aloof guy, but he was more endearing than sarcastic. More so, he was really believable.

In the 2013 film Jobs, about the late Apple giant and starring Ashton Kutcher, Wozniak was played by Josh Gad. So there's clearly something about Wozniak that just screams, "the goofy, funny guy of the gang." If Rogen does land the role, it just may be his first big stepping stone into more serious acting. Though he and Wozniak are 32 years apart, they have plenty in common. Rogen just may be the best man for the job.

They were both dropouts

Wozniak left the University of Berkeley in 1971 after only completing one year of study and Rogen dropped out of high school in order to film Freaks and Geeks when he was just 16-years-old.

They Started Their Careers Early

Rogen wrote the screenplay for Superbad when he was only 13 and Wozniak built the Apple I computer when he was 25. Both projects have grossed many, many millions of dollars.

Their Creative Partners Get All The Cred

Though Wozniak designed and built the Apple I and co-founded Apple Inc. with the late Steve Jobs, it is Jobs who became the figurehead of company. Conversely, Rogen is the face of many of Judd Apatow's films, he's even written handful of those projects, Apatow is highly considered the King of modern comedy.

They have a thing for stand-up

Rogen started his career as a stand-up and Wozniak started dating Kathy Griffin in 2007 after he saw her perform live.

They're no strangers to television

Though Rogen got his career started on the small screen in shows like Freaks & Geeks and Undeclared, Wozniak found his way to television later in life appearing in Kathy Griffin: My Life on the D List, Dancing With the Stars, and The Big Bang Theory.