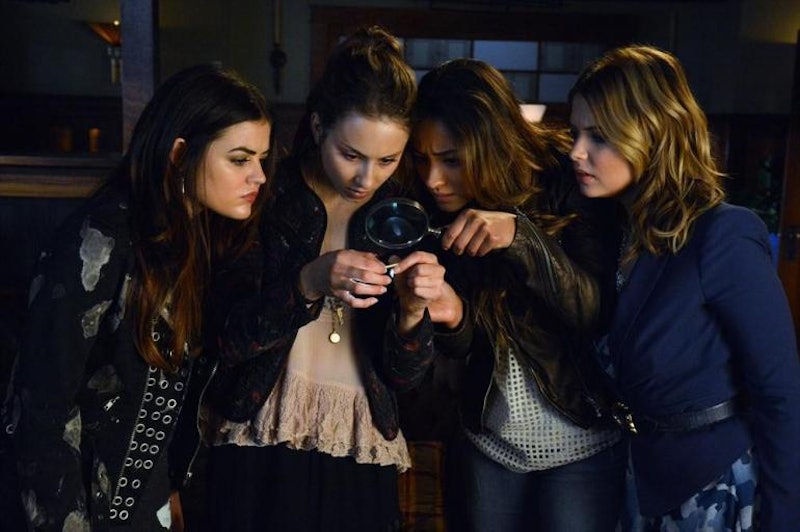 It's fall, which means we can rely on certain things: pumpkin-flavored everything at Trader Joe's, crunchy leaves to step on, and, of course, the Pretty Little Liars Halloween episode. At least, we thought all of those things were staples of fall. This year, Pretty Little Liars decided to forgo the traditional Halloween episode in favor of a Halloween "fan appreciation hour." The episode, which aired in mid-October, was a great way to get details on the cast and some (very minor) spoilers for the upcoming season, but it was in no way as great as an actual plot-moving episode of PLL. Luckily, we are getting one of those — just for a different holiday. The Pretty Little Liars Christmas episode airs on Dec. 9, and it promises to turn the holiday season into a living nightmare.

So far, the episode looks like one for the books. The PLL Christmas episode promo, which was shown during the PLL fan appreciation hour "We Love You To Death" gave us a glimpse at what to expect from the holiday episode: an ice ball, a creepy Nativity scene (featuring a Mona doll — eep!), and lots of sleuthing. But why did Pretty Little Liars choose to skip over Halloween and do a Christmas episode instead? There are a couple of reasons for the change — even though I know we all secretly wish we could have gotten both holiday episodes out of Season 5.

The first, most obvious one is that the writers wanted to shake things up. According to showrunner I. Marlene King, she has wanted to do a Christmas episode for years, and Season 5 finally gave her the chance to do it. I don't blame her for wanting a new twist on the standard off season episode — there have been three Halloween episodes to date, and while each one was fun, they were all, well, Halloween-y. Swapping out pumpkins for snow isn't the worst idea in the world — at least, every few years.

But there's a reason why Season 5 was the perfect time to do a Christmas episode, and that has a lot to do with the timeline of the series. Remember, the Pretty Little Liars are currently in December of senior year — Season 5A has moved a lot slower for the liars than it has for viewers. The Season 4 Halloween episode of Pretty Little Liars didn't actually take place on Halloween, either — it seems obvious that the series didn't want to burden itself with a strict timeline until they could catch up with the actual world, hence why we didn't learn it was near Christmas time until the series discussed Thanksgiving. (And Ezra and Aria ate all that damn pie.) Pushing the Christmas episode back in our time by having us wait a few months makes sense — once it airs, the PLL universe should match up with ours.

More like this
Every Horror Movie Reference In The 'PLL: Original Sin' Premiere
By Alyssa Lapid
The 'PLL: Original Sin' Creators Say A’s Identity Will Be “Very Clear” By The Season Finale
By Alyssa Lapid
Molly-Mae Hague Has Secured Herself A Pretty Little Fortune
By El Hunt
Netflix Reveals First Look At Wednesday In The 'Addams Family' Spinoff Series
By Bustle Editors
Get Even More From Bustle — Sign Up For The Newsletter