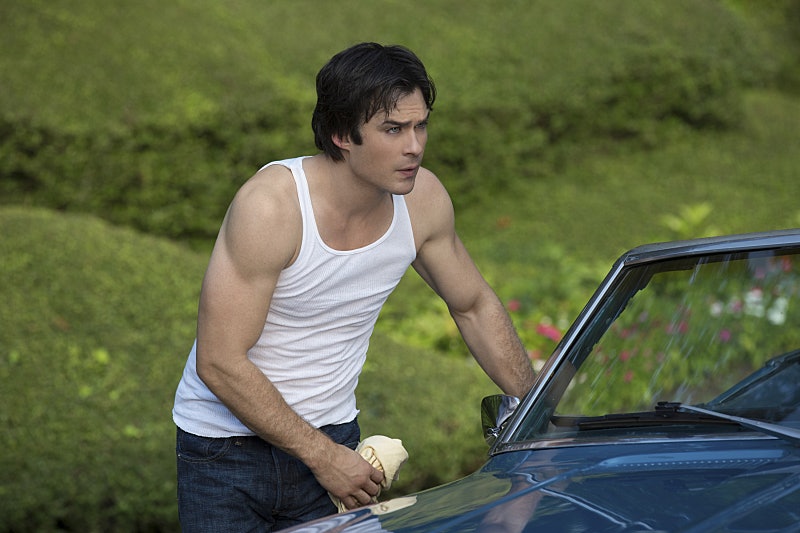 Well, our moment has come, my fellow Delena fans — though I'm not entirely sure that it'll be as happy as we thought. On Thursday night's The Vampire Diaries , Damon returned to Mystic Falls and there was a beautiful reunion — no, not a Delena reunion (sobs) — but a Salvatore brothers reunion that really tugged at my heartstrings. God, I love when those two get along, especially now that it means Stefan can finally "get over it" like he's been so desperate to do. But, while it's great that Damon's back from 1994 in one piece, I have to wonder how long he'll stay that way before TVD asks the big question: Will Damon and Elena get back together on TVD Season 6?

So, here's the deal — Kai needed a Bennett witch to activate his little astrological device and do the spell that would get him out of May 10, 1994. I'm not entirely sure why Bonnie's grams would send her there to help this murderer escape his prison, but TVD is weird that way and, honestly, this isn't so important right now. Because, I repeat, DAMON SALVATORE IS BACK and now the order of things can go perfectly back to normal — Alaric and Enzo will get their BFF back, Elena will get the love of her life back, and Stefan will get his brother back. AND we didn't even have to wait until midseason for Damon to return to the land of the living; for the first time in at least three seasons, I feel compelled to thank Julie Plec and give her a huge hug. (OK, that's a bit of an exaggeration.)

Obviously we need to talk about what's going on with Elena — I mean, she kissed that cute med student tonight and they seemed to really be hitting off. Which would be fine, if Elena didn't, early on in Thursday's episode, bash her lost memories of Damon. Seriously, she asked OUT LOUD why she'd want to remember her ex-boyfriend who also happened to be a murderer. (Newsflash, Elena, you're not a damn saint either. God.) And, unfortunately, Alaric's been feeding into Elena's bad attitude and being an absolute enabler of her weakness. Frankly, it makes me feel ill.

TVD revealed during last Thursday's episode that Elena can get her memories back at any time, all she has to do is ask Alaric. And, now that Stefan spilled the beans to Elena about her begging Alaric to compel her memories away, she knows that she was once in love with Damon. So, now that the Salvatore reunion is over, the next event will absolutely be Delena's first Season 6 moments together (I'm not counting Elena's drug-induced hallucinations). Which will be heartbreaking as hell because Damon has no idea that Elena's erased their love from her memory, but also easily fixed. Unless Damon doesn't feel like he can get back together with her after her latest mistake.

Damon's been through a lot and he fought to get back her to the girl he loves. Can Delena get back together after he finds out that she couldn't handle remembering him? I mean, I obviously hope so because I truly, deep down believe that they are endgame. But I can't deny that I'd be surprised if Damon wasn't seriously hurt by Elena losing faith in his return. That's just unforgivable.