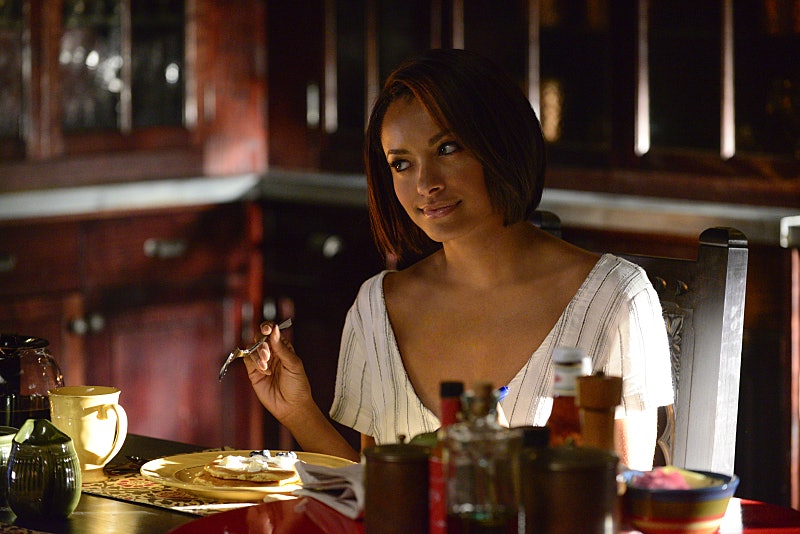 This really did not go as planned and, frankly, I can't think of a single TVD fan that would've expected this to happen. But, apparently it did. On Thursday night's new episode of The Vampire Diaries , "The World Has Turned And Left Me Behind," Bonnie stayed in 1994 with Kai after she got Damon to return to Mystic Falls. Why? Well, Bonnie might've just won over all of the fans she lost when TVD started pushing the idea of Bamon onto us as a viable 'ship. Because she sacrificed herself to get Damon out of there and back to the people he loves. And, while I'm impressed and experiencing the feels, I can't help but wonder how Jeremy's going to react to this.

First of all, TVD revealed on Thursday night's episode that Kai didn't, in fact, know the spell that would take the three of them out of 1994. Because only a Bennett witch would know and be able to perform it — SURPRISE. So, after Bonnie figured that out, she tried to kill Kai by literally levitating an axe and having it fly into his chest. (Brutal, I know.) And it seemed like that worked, so Damon and Bonnie went on their merry way of performing the spell and finally getting home.

Well, Bonnie and Damon seemed to forget that they were, allegedly, in Kai's hell — thus, he couldn't possibly be killed. (As it turned out, Kai had tried to kill himself hundreds of different ways before in an attempt to escape his prison.) So, Kai returned, mid-ritual, and shot Bonnie with an arrow. I know, you have no idea how such a shit show could possibly occur and yet, this is the very same TVD that we know and love. So, after Bonnie was shot and Damon and Kai fought, she used her powers to break them up, secure Damon the artifact to get home, and complete the spell with one catch — she stayed behind, bleeding.

So, as much as I can't believe that this is something I'm actually concerned about, what the heck is going to happen to Bonnie? Kai's obviously not going to be happy that she used his only chance to escape his prison to send Damon home. And, well, Bonnie's injured — Kai shot her in the stomach — and when we left her, she was laying on the floor in a cave, gasping in pain. Will she die? Doubtful, considering there's really nowhere for dead supernatural beings to go these days. And I know that TVD isn't going to let a reunion between her and Jeremy — even if that couple is a little odd — not happen in Season 6.

Aside from the question as to whether or not Bonnie will die, it also feels safe to assume that Jeremy isn't going to handle it well that someone else returned and Bonnie still stayed behind. Honestly, I don't blame him for feeling angry and hurt that Bonnie couldn't say goodbye to him in person when she knew that she'd die. That's just cold and I can see it hurting Jeremy more to see Damon back and Bonnie still somewhere out in the magical abyss.

Personally, I hope she survives, because that guy can't really afford anymore heartbreak. But absolutely not because I saw that little twinkle in her eye when she looked at Damon — he belongs to Elena, step off, Bonnie.