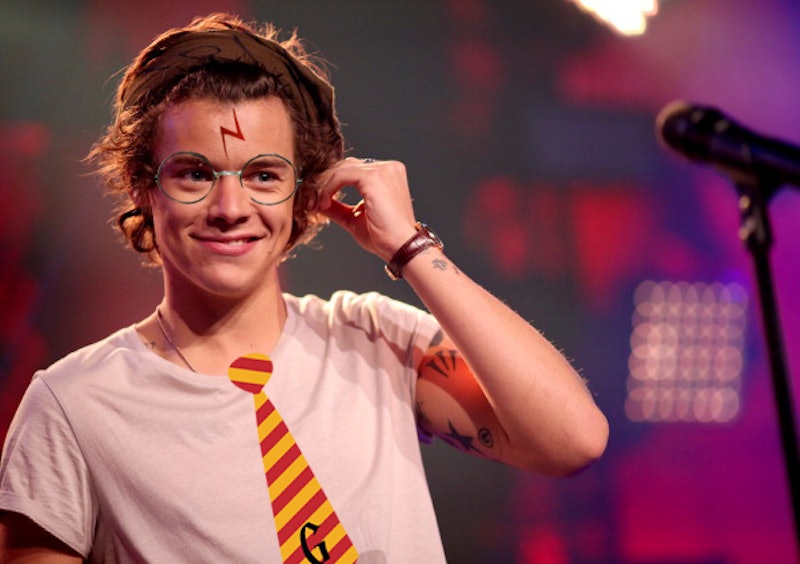 If you're like me, then you are on your fifth day of playing Taylor Swift's 1989 album like it's going out of style. (See what I did there, Swifties?) In just about every song on the album that's rumored to be about her ex-boyfriend Harry Styles, Swift makes references to Styles' green eyes. The boy band member has eyes that look green in some lights and blue in others, but overall she (and all of us) seem to be fascinated by their green color more than anything else. You know who else has green eyes? Harry Potter. And the more I thought about that, the more I began to realize that Styles and Harry Potter are actually the same person. In fact, if Styles is ever looking for a Halloween costume, then he might want to try the boy wizard on for size.

"Excuse me," you might say. "But Styles is not an orphan with a scar who is constantly on the run from a dark wizard." And to that I would reply, "Fair enough." But if you look at the evidence, then Styles and Potter have a lot more in common than just both being British (though that is a consideration). In fact, I have nine pieces of compelling evidence to prove that the two Harrys are more alike than you might have thought.

Hellooooo? Accent? Accent? Sure, their accents are from two different parts of England, but I'm willing to overlook that if you are.

2. They both have green eyes.

Just ask Taylor Swift. Of course, Daniel Radcliffe's eyes weren't green in the movies, but there were a lot of glaring oversights in the films like that one. Let it go like Elsa from Frozen.

The defense rests. Oh, what, you still need more? Okay...

4. They're both famous to the point of awkwardness.

In the sixth movie, Harry Potter's outside fame started to gain him popularity inside school, too, and he was nearly slipped a love potion by Romilda Vane. Two weeks ago, Harry Styles threw up on the side of the road and a fan turned the spot into a shrine while another fan tried to sell his alleged vomit on eBay. Yeah. Awkward.

5. They make friends in bizarre ways.

6. They both have friends that are family.

Styles and the other members of One Direction are all like family to each other. It's only to be expected considering how much time they spend together, on and off the road. Meanwhile, Harry Potter not only turned these select members of Dumbledore's Army into his own little mini-family, he also ended up related to three of them via marriage (Ron, Ginny, and Hermione, in case you were wondering).

7. They both reconciled with their exes.

Both Styles and Harry Potter had a romance that crashed and burned and both of them gave Swift and Cho Chang respectively some space after that. However, they both eventually managed to return to being on good terms with their exes, even if they didn't hang out much after the relationship.

8. They both hate tabloids.

Well, all right, neither of the Harrys have said specifically that they hate tabloids. However, there are a lot of crazy stories written about them (see the point about them both being famous) so I have no problem imagining that the media isn't always their friend. Especially members of the media who don't care about the truth.

9. They both have movies about their lives.

I mean, I firmly believe that the Harry Potter movies were better than One Direction: This Is Us, but that's probably because one was an actual movie and one was more like a documentary. Either way, if you want to find out about Harry Potter or Harry Styles, then there's a movie you can rent to do so. You know why? Because they're the same person.