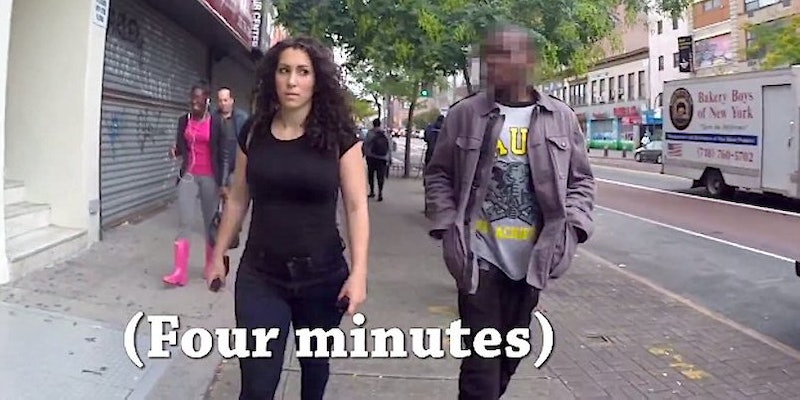 By now, you've probably seen the viral video of actress Shoshana Roberts walking the streets of New York City, enduring some pretty appalling street harassment. In the video, Roberts experiences real-life harassment ranging from being told to smile to being silently trailed by a man for five minutes. The short video is terrifying to watch, and rightly went viral after its release this week.

But while most were simply shocked by seeing what women have to deal with on a daily basis, others have also critiqued the video itself, with some even going so far as to pointing out its racist portrayal of men of color. It’s hard not to notice that the majority of the men doing all this catcalling are either black or Latino — why make it seem like only men of color harass women?

Bustle spoke to Rob Bliss, the creator, producer, and director of the video, which was a collaboration with the anti-street harassment organization Hollaback, about the controversy surrounding the video, and the inspiration behind it. Here’s what Bliss had to say.

BUSTLE: How did you conceive of the idea for the video? How did you know Shoshana was the right woman to cast?

Rob Bliss: I came up with the idea after doing research on street harassment and realized that no one had really ever intimately captured street harassment on camera before, [or showed] people what that harassment feels like, the collective weight of all the comments.

I knew Shoshana was the right person because I could just feel this energy and can-do attitude that was so critical to this project. We both knew this would be physically and mentally exhausting, and so I needed someone with the tenacity that comes naturally to her.

How did it work? What were the ground rules? Was it really only 10 hours of tape, or did you do a 10-hour walk multiple times? Did you choose certain neighborhoods thinking more catcalling might occur there?

We walked for a total of ten hours, split into 2-3 hour shifts. Her instructions were to never interact or react, and just let everyone else bounce off of her. The entire video was set up to put the focus not on her and what she was doing, but everyone around her.

The areas that street harassment take place are areas with high pedestrian foot traffic. I'd estimate that only one percent of guys catcall, but to find them you have to first go through the other 99 percent. That's why, for example, Midtown was our biggest hotspot for street harassment. There are just so many people around that eventually you'll come across someone who catcalls women.

When that guy was following her for five minutes, had you ever given her an instruction on what to do if she felt unsafe?

Other than at the start telling her to never interact or react, she didn't have any instruction. To be honest, coming into this project as a guy, I didn't even realize that something like that could or would happen — I was naive. I was 5-10 feet in front of her at all times, but I never thought that I would capture stalking on camera.

Have you talked to her since the video? I heard she received rape threats. How has she been doing?

She has received many rape threats, yes. She has been doing well, though. I knew that if this video went viral, that harassment would probably extend outside of the video too, and that's again why I picked her. I knew she was tough and could hold her own.

Despite the intended purpose of the video, many people seem to be focusing on the fact that there aren't many white men catcalling in it. When you were in the editing process, was that a concern for you? Or did it feel like an accurate representation of what actually happened?

I knew going into this project that there was no way this would be statistically accurate. I did at the end of the video make it clear that we had people of all backgrounds who catcalled because I felt this might come up.

There are literally just 18 scenes in this video, which is going to lead to massive inaccuracies. For example, there's no Asian guys. I'm not trying to "defend Asian men," or say that Asian men don't catcall because they definitely do, we just didn't have any that made the final cut. People are treating this like it's a survey, but no one would trust a survey of 18 people.

Additionally, those two guys that follow Shoshana make up literally half of the video, and because by chance, they were black, now half of the video is showing black guys. That just only further demonstrates how statistically inaccurate something like this is, and how it shouldn't be taken so literally. What if they were two Russians, or Japanese guys? Would we be saying that Russians make up half of all catcallers? That's the problem with drawing too much from this video. It was just one girl's 10 hour experience, composed of 18 different scenes.

Do you think you should have included more white guys in the video anyway?

I don't think people realized how many white guys are in this video, mostly because everyone's faces are blurred and summer just ended. There's about 6-7 scenes where a white guy harasses her, roughly 33-40 percent. It's worth remembering just how diverse NYC is. About 44 percent of NYC is white, and 55 percent are black/latino, so the fact that we showed 33-40 percent white guys isn't even very off, statistically:

The problem that people are seeing though is that while the actual numbers scene by scene are relatively accurate, the on screen time for blacks/hispanics are much, much more, and that's because the two non-white guys who stalked her tip the scales completely, making up half the video.

People might ask, why didn't we just film more scenes to get a more accurate representation? And the reason is because we wanted to set a 10 hour window to prevent the argument of, "Oh they just filmed endlessly for weeks until they had enough harassment to pretend that this is a real issue." By setting the 10 hour cutoff point, we were able to prove that yes, this is a real and frequent issue, but by having such a small amount of material to work with, it lead to an inaccurate racial representation.

Any upcoming projects with Hollaback coming up? As a man, has working on this video changed anything for you?

For me, I always try and move on to the next big idea, and so I probably will not revisit this issue. This video has definitely been a crash-course in learning about street harassment, and completely changed my perceptions of what women have to deal with.

It is frustrating, because my goal was always to be just as simple and unjudgmental as possible, lay bare what street harassment looks like. I felt that it was really important to show those two guys [following her] because even I didn't know how common women can be followed and stalked, and I felt the footage was important to show this wasn't a random one time thing — it happened twice.

The flip side of that, is that to demonstrate that she was being stalked, just one of those guys alone was on screen for 20 seconds, compared to a white guy who just says "Nice!" in passing, totaling for 2.5 seconds. I felt we had to show the footage, but we also needed to keep this video short and under two minutes for it to be internet-friendly. People have short attention spans online and aren't going to watch a short film.