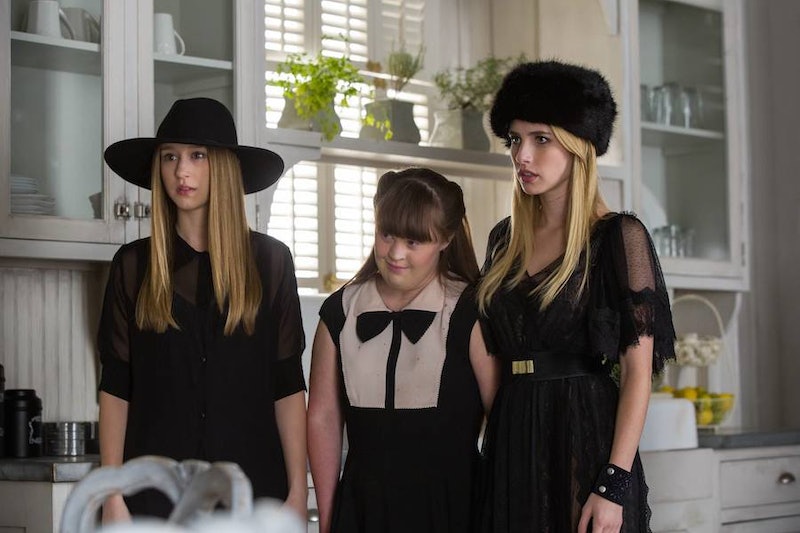 Since the return of American Horror Story's season 2 Asylum character, Pepper (Naomi Grossman), this season, and the reported upcoming return Asylum's Sister Mary Eunice (Lily Rabe), it's been widely assumed by fans that the current season of American Horror Story: Freak Show is definitely connected to Asylum. A prequel, of sorts! But, what about the other AHS seasons set in present day, like season 1's Murder House, or season 3's Coven? Though any connections between these seasons and the others aren't immediately obvious, they're are, apparently, indeed there: According to series creator Ryan Murphy, all of American Horror Story 's seasons are connected, and the hints are in every episode — if you know where to look.

Murphy spilled the beans in a recent interview with EW (which includes many spoilers, so be aware before clicking it!):

This is interesting. While it's been very obvious that season 2 was connected to season 4's even before Freak Show premiered — there was a line in season 2 that clearly referenced "freaks" — the connections between season 1 and season 2 are harder to find, and it gets even more difficult if you start to look at season 3.

Still, Murphy stresses, the hints are there:

There’s definitely a rhyme or a reason and a connectedness to all of these seasons, but in the same way, they’re standalones, which is the fun of it. But it is a puzzle. [...] They’re all connected. We’re just beginning to tell you how they’re connected. They’re all very separate but there’s clues every season that we’re now telling you how the different worlds are intertwined.

Who else is already planning a major rewatch to catch all these hints? Because, seriously, I got nothin'. Still, it's intriguing to hear that AHS's plot is so intricate — even if we're all too distracted by the terrifyingness of Twisty this season to notice any of the subtle hints.