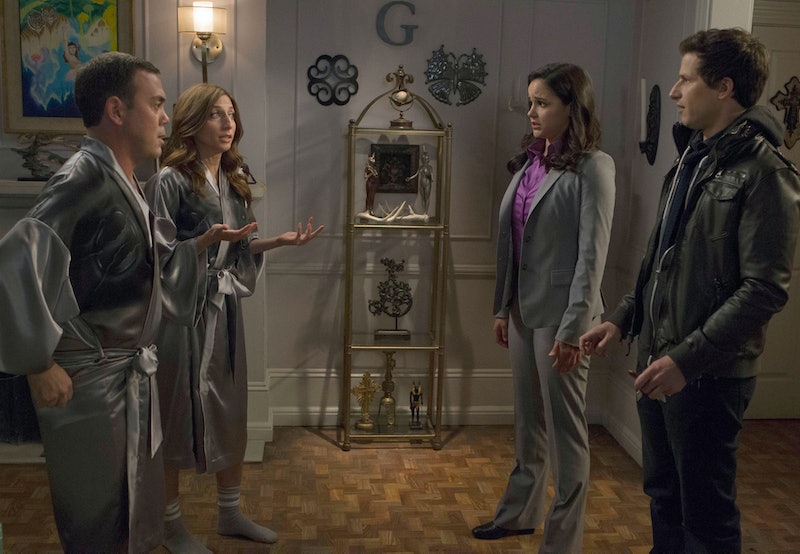 We knew this day would come. Once it was revealed that Boyle and Gina had drunkenly gotten into an affair during the Season 1 finale of Brooklyn Nine-Nine , it was only a matter of time before somebody would find out. We just didn't know when, how, or who would do it.

But we should have known back then that of course it would be Boyle's best friend Jake who would have the misfortune on walking in on him and Gina doing the nasty. You see, when the precinct comes under investigation for having a possible mole, Jake thinks no one could possibly be leaking information since he always knows what they're up to. However, it turns out Jake doesn't know his friends as well as he thought at all.

At first, it actually seems like Jake is the shifty one because he's been taking some case files home and not returning them as promptly (or at all) to the precinct as he should have been. He and Amy head to his apartment to collect the files before the investigator, Lieutenant Miller, finds out what's up. They also head over to his old apartment, of which Gina took over the lease last season, completely unannounced. That's where they find Boyle and Gina doing the horizontal mambo on the couch in matching silky gray robes adorned with wolves, no less.

Jake and Amy are obviously shocked and grossed out at first, but surprisingly, the episode doesn't dwell on this seemingly huge reveal, which Season 2 has been building up toward. There's kind of the initial moment of surprise, but then everyone quickly moves on to solving their respective cases.

This seemed appropriate for Brooklyn Nine-Nine and its characters. We've seen Jake and Boyle go through so many more hardships in their friendship in a little more than a season that to see any big outrage or sadness from Jake over this would have seemed unnatural to the character. Boyle and Gina are both single and are grown-ass adults, so they can do whatever they want. The 99th Precinct is really like a family that for Jake and Amy to not ultimately be supportive of Boyle and Gina would just seem odd.

This could have been one of those situations where Jake and Amy had to keep this huge secret among the four of them. However, Brooklyn Nine-Nine decided to get the unveiling over and done with pretty quickly, which further underscores how mundane it finally became. At the end of the episode Gina stands on her desk and tells everyone in the precinct that she and Boyle slept with each other 16 and a third times. I'm really hoping we find out exactly what that one-third of a tryst entailed.

There was hardly any reaction from the crowd other than Hitchcock disgustingly wanting to know how the sex was. Gina says it was "adequate," in case you were wondering. I guess there wasn't enough time at the end of this episode to really show Rosa's reaction to the whole thing. Though she's made it clear that she doesn't have romantic feelings for Boyle, I can't help but think she secretly pines for him. Something is going to happen between these two. It just has to, right?

And the biggest shocker of the episode for Jake wasn't actually Boyle and Gina's fling. It was the revelation at the very end that Captain Holt's middle name is, drum roll please, Jacob. I can only respond to this in the same way that Jake did at the end of the episode: WHAAAAT?!