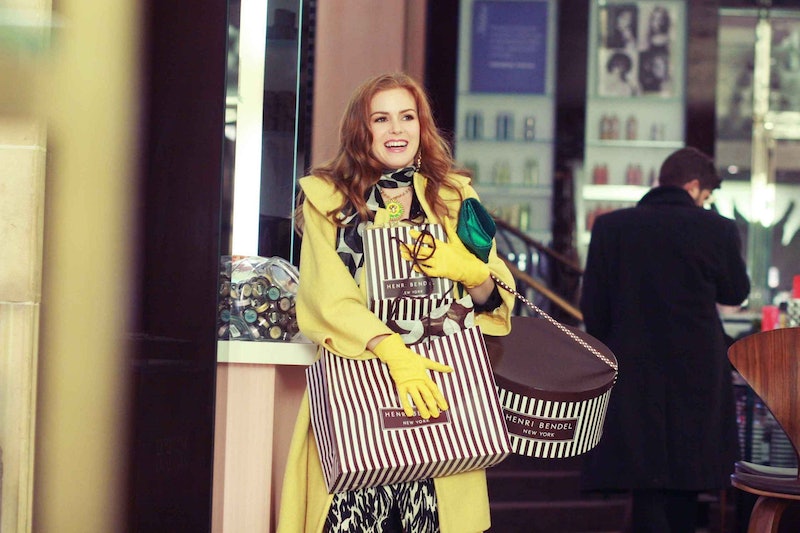 Everyone has that gut-squelching moment in their early twenties when they open their online credit card statement, guesstimate the worst case scenario as the page is loading, and then gasp a little in shock when they realize they're far over that number. It was extra surprising for me this past July because it's not like I was a credit card novice. I'd had my card since my sophomore year of college so I could start establishing good credit. But somehow on the yellow brick road to adult responsibility, I'd gone very astray.

In my defense (kind of), I had started a new internship in DC and needed more of what I was cheerfully calling "adult clothes," and what I'd failed to realize is that "adult clothes" accumulate in price a hell of a lot faster than the trinkets I was buying at Forever 21. I'd also been splurging because the internship was paid, and like any 20-something reveling in the glory of a first paycheck, I got a little frisky with my spending. So I decided that night to do something drastic: I wasn't going to spend money on clothes for the next six months, the only exceptions being underwear and socks, because I am also not a caveman. I am approximately four months into my self-struck deal, and this is what I have learned so far:

Shopping Addiction Is A Real Thing

I have never considered myself someone who needs to shop. Nobody in my life would describe me as "fashionable", and I rarely leave the house with the intention to shop like it's some sort of hobby. But oh boy – The first few times I passed shops during my "clothes-buying fast", I straight up became Becky Bloomwood in Shopaholic . I saw sweaters and infinity scarves that I literally salivated over, that I became so ridiculously emotionally attached to on sight that I put them on a pedestal far above any actual human I've ever desired.

I didn't even have to leave the house to experience this longing; Online ads got me too. I think Nordstrom was straight up trying to seize my life force in September because every time I refreshed Facebook there was a pair of brown ankle boots in the side bar that I can only describe my attraction to as sexual. Like, even thinking of them now gets me hot and bothered. THIS IS A REAL THING.

You Will Save A Ton Of Money

You don't really notice it at first, but a few weeks into not buying any clothes, your bank account will suddenly look a little meatier. I think it's easy not to take into account how much we normally spend because most of us will thoughtlessly buy cheap staple items or styles that are trending to avoid dropping a lot of money, but even those add up, especially with how easy it is these days to shop online. NORDSTROM.

And You Can Spend That Money...On Food

So far the best part about saving money on clothes is that I can spend more on going out to eat with friends, and – as cheesy as this sounds – the memories I make drinking the occasional overpriced drink in a trendy place with my friends will last a lot longer than a pair of pink heels I was only brave enough to wear once. And speaking of cheesy, I really love cheese, which is just one more thing I can now afford more of.

You Find More Fun Things To Do On The Weekend

When you're actively trying to avoid shopping for clothes, you gravitate toward things you wouldn't normally. The other day, I went to a farmer's market. I'm still basking in the glory of how responsible that sounds. But I also tend to do things that are a lot more social and see more of my friends, because as fun as shopping is with other people, a lot of the time it's something you end up doing alone.

You Feel A Lot Less Stressed Out About Your Body

When I get into a dressing room, I turn into the world's biggest cliché, pinching at things in bad lighting, scrutinizing every angle of myself now that I am suddenly in a place with a bajillion zillion mirrors that let me see all 360 degrees of my butt. Buying new clothes is actually pretty stressful when you think about it, even for people who are comfortable with themselves. It can be hard to find things that fit right no matter what body type you are. But now I have a six-month vacation from fretting over it, and that's kind of refreshing.

You Reunite With Old Things You Never Wear

Organizing my apocalyptically messy closet became necessary when I made the commitment to stop shopping for new stuff. I've bounced between DC, Nashville and Seattle in the past year so looking into my closet was like staring into a black hole. It took me the entire first season of Scandal to clean it the other week. But the beauty is I found all these clothes I hardly wear anymore, some things that I haven't paid attention to in years, and now that I'm not constantly bringing in new clothes, I can commit to wearing things that I used to love and simply forgot about.

You Realize There Are Some Things You’ll Never Wear Again

There is a reason some of those clothes were shoved to the back of my closet, and I realized it once I put them back on again after all this time. I've held onto stupid things like jeans I outgrew years ago or shirts that never hung right, but this was a chance for me to be brutally honest with myself and give anything I wasn't wearing anymore away.

This probably won't last very long because I am notorious for being a hot mess, but right now I'm feeling pretty smug about it.

I will eventually stop comparing clothes to romantic endeavors, maybe. But the same way some people, as they get older, decide to weed out relationships that won't last in favor of ones that will go the distance, I now have a much clearer idea of what clothes purchases will be worth my while in the long run. That sweater I salivated over in August? Eh. I look back and it's cute, but I'll live without it. Those boots from Nordstrom, though. They've got my number. And come January, they will be mine.