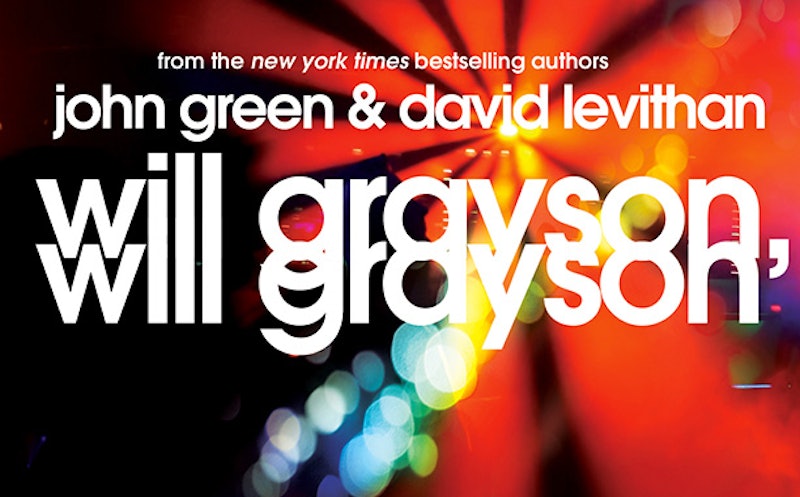 Will Grayson first made his appearance as one of the titular characters in the John Green and David Levithan collaboration, YA novel Will Grayson, Will Grayson. Readers probably know him better as "will grayson," as he was notorious for his all-lowercase writing style. But he's back, this time as a supporting character in Levithan's spin-off Hold Me Closer: The Tiny Cooper Story . And he as a bone to pick with his creator.

Will Grayson, Will Grayson, tells the story of the two characters of the same name who meet up and change each others' lives forever. Green wrote the uppercase Will Grayson, and Levithan wrote the lowercase will grayson character's chapters. The latter enters the original novel searching for a relationship with a person he met online, Isaac, who turns out much differently than his online persona promises. Instead, he meets up with the former Will Grayson's best friend, Tiny Cooper, who is the protagonist of Levithan's new novel.

Hold Me Closer: The Tiny Cooper Story follows the musical that Cooper wrote during his time in Will Grayson, Will Grayson. And, as you'll see, will grayson just doesn't think that a musical revue is how Levithan is going to bring in the bucks. Levithan's will grayson discusses this, Hedwig and The Angry Inch, and just what's so great about young adult fiction as he interviews his creator.

will grayson: what the hell were you thinking?

wg: i don’t know what flavor kool-aid they serve in your little world, but last time i checked, planet earth wasn’t exactly clamoring for books about enormous gay kids, or for books with songs in them. we’re not really in gone girl territory here, are we? i don’t recall there being any songs in that. so why would you do such a thing?

DL: I did it because even though he’s everything that some people like to make fun of, I’ve found that a lot more people really, really like Tiny Cooper. I myself really, really like Tiny Cooper. From the moment my coauthor John read his first chapter of Will Grayson, Will Grayson to me, I knew that Tiny would steal the book. Which, no offense, he did. When we finished writing that book, which contains a few (but far from all) of the numbers from Hold Me Closer, I found myself wanting to complete the musical.

wg: didn’t you have anything better to do with your time?

DL: I wrote a couple of other novels. But I also wrote the first act of Hold Me Closer, showed it to John, got his blessing, and kept going. It took me a while (four years, give or take), but eventually I finished.

wg: let me put it this way. how many musicals has that stephen soundlame guy written?

wg: and how many have you written, mr. jazzhands?

wg: and is there music that goes with it?

DL: I’m sure there will be an official version at some point. But right now I kinda love the idea of putting the lyrics out into the world and seeing what the world does with them.

wg: you have no idea how to sing these things, do you?

DL: Well, I do have tunes in my head. [Begins to sing one of the songs to Will.]

wg: STOP! you realize you just inserted a cheese grater into my eardrums, right? now i know why autotune was invented.

DL: That’s why this is a novel in musical form. Or a musical in novel form. I know one half of the equation as a creator and one half as an audience member. Which hopefully will add up to something really—

wg: gay. it adds up to something really gay.

DL: Well, yes, there’s that. But, as I’m sure you know, the novel you were in had its share of gayness, too, and it certainly found a wide audience.

wg: so what kind of research did you do? did you, like, spend a week dressed up as a really huge, gay teenager? because if you did, that’s a pretty messed-up image that’s appearing in my head.

DL: No, I didn’t have to transform myself into Tiny Cooper. The emotions were all readily accessible. And for the music part, I didn’t have to stray far from my regular theater-going routine. I go to A LOT of theater — musical or non-musical. And certainly I started to pay more attention during the musicals.

The summer I was finishing this book, the revival of Hedwig and the Angry Inch opened on Broadway. I saw it four times. Hold Me Closer is hardly Hedwig, but they do have in common that they’re one-person shows that actually have other people in them.

wg: what the hell is an angry inch?

wg: hedwig and the angry inch sounds like a musical about an owl and a pissed-off worm.

DL: Pissed-off worm isn’t far off. You’d probably like it.

wg: don’t pretend you know me at all.

DL: Aren’t you going to ask me what I hope readers get out of Hold Me Closer?

wg: no. let them make up their own minds.

DL: Okay, if not that, do you have any final question?

wg: i don’t think you’ve answered my first one. what the hell were you thinking?

DL: I was thinking that one of the most amazing things about YA right now is the freedom it gives authors, and that as an author, I want to take advantage of that freedom in whatever way I can. I have seen firsthand how liberating reading the right book can be — and I also have seen firsthand how extraordinary it is to be sitting in a theater and hearing words and music that pierce straight to the heart of who you are, or how you want the world to be. A lot of us find ourselves by finding the songs and the words we love. I wanted to tap into that, in ways that include but also go beyond the form of a novel. Also, it was really, really, REALLY fun to write. Never underestimate the power of that, either.

wg: why did you want me to interview you anyway?

DL: Well, funny story. I asked Penguin to have Will Grayson interview me. But I forgot to specify which Will Grayson.