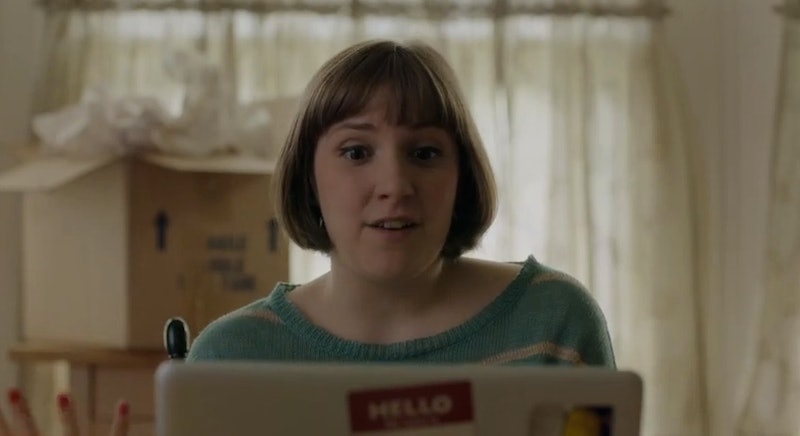 Omg, shut up, no way, get over here. During all the weekend's Halloween craziness and following the recent Lena Dunham "rage spiral," I neglected a brand new Girls S eason 4 promo . How could I let this slip under the radar? I've been a shell of myself these past six-or-so months. In the meantime, with the lack of the series, I've been clinging to any shred of an update, and what I've mostly gathered is that this season is to be peppered with guest stars. This includes Community's Gillian Jacobs as multimedia artist Mimi-Rose Howard, Zachary Quinto in a one-episode guest appearance and Judd Apatow's 15-year-old daughter Maude Apatow. The best, most recent revelation, though? We meet Shoshanna's parents this season, and Ana Gasteyer is playing Shosh's mom. It's PERF, of course, because you know that Shoshanna has watched Mean Girls, like, at least a thousand times.

So what are the girls of Girls up to, and what exactly do we hope to see next season? Here's my quickie recap below, and then watch the video to see new characters, shorter haircuts, updates on the boys, and what appears to be Hannah and Elijah crashing a frat party. Oh, it's been too long.

When we last checked in on Hannah she had recently been accepted into the University of Iowa creative writer's workshop, and she's at least, in some capacity, testing out the waters there. Perhaps the season will have her beginning the fall semester, although I have a feeling she may just be trying out summer classes to get a feel for the campus.

Hopes and Dreams: OK, but let's be real, she is not going to stay there. First of all, it's Iowa. Moreover, no true New Yorker ever stays in college when they have the option of floating around the city aimlessly. See: the entire cast of Gossip Girl.

Marnie and Desi are really pushing this whole folksy affair, both creatively and probably physically. And while it's great to see Marnie genuinely pursuing her dream, this plot line solidifies that besides being uptight, Marnie's defining qualities are "singing awkwardly in public" and "having boundary issues."

Hopes and Dreams: To paraphrase Elijah, I really can't see this going well for Marnie. At the same time, I really don't want to be dragged through another "Poor Marnie" storyline where she has to assert she's "OK" every 3 minutes. I'd love for her to be offered a record deal on the condition that she drops Desi. Or for his girlfriend Clementine to beat him to death with an acoustic guitar. Either way, he's kind of the worst.

It's not really clear what Jessa's up to this season, although I'm sure it's some variation of the usual: philosophizing, internalizing her issues, running away to Santorini or something. And maybe, if you take a close look at the clip, getting arrested? Has Jessa's normally infallible charms worn off?

Hopes and Dreams: There's definitely a whimsical middle ground between crazy, jittery drug addict Jessa, sad, lethargic puddle-of-Jessa, and off-the-screen-in-Bali-for-three-episodes Jessa. What happened to the coquettish adventurer wrapped in a kimono and feathers? I want her back.

It is very possible that Shoshanna's cute new haircut was done during her I'm-not-graduating breakdown. Perhaps this departure from her usual avant-garde styles is a mark of her new maturity, so she can refocus on her studies instead of piling braided side buns. That said, why can't she have all of it?

Hopes and Dreams: Shosh, as the baby of the group, has pretty warped ideas of what marks adulthood. Last season we saw the dark side of that: she became a selfish, cruel, distracted, and essentially went through the reckless-and-promiscuous phase that everyone else typically goes through at 19. I have faith, though, that she's going to rebrand and be stronger for it. Hopefully she can throw herself into a project that will show her that being a grown-up is not about how much penis is in or around you, nor is it mutually exclusive from having the best hair on television.

More like this
You’ll Most Definitely Recognise Kyle Pryor’s Soap Star Girlfriend
By Sophie McEvoy
Kim Cattrall Had A 'Sex And The City' Reunion With Creator Darren Star
By Grace Wehniainen
Mindy Kaling Explains Why 'The Office' Would Be "Inappropriate" Today
By Jake Viswanath
Is Blake Lively Or Penn Badgley The Richest 'Gossip Girl' Star From The OG Series?
By Hugh McIntyre
Get Even More From Bustle — Sign Up For The Newsletter