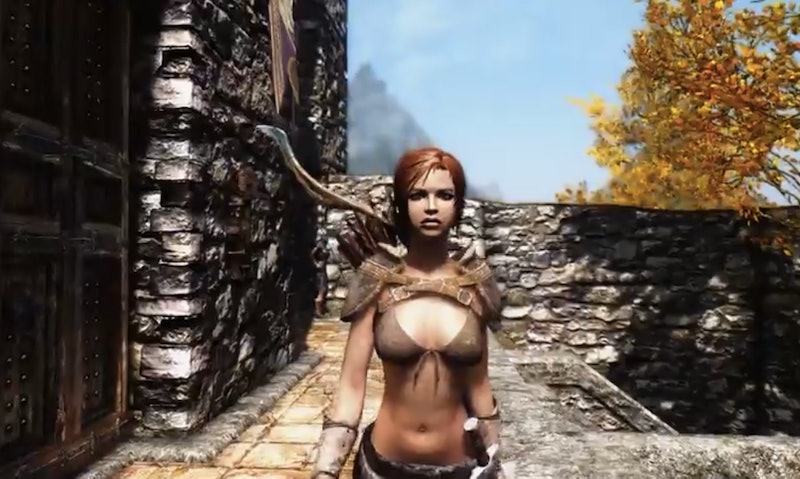 Considering the Internet is the worst, I knew it wouldn't be long before someone created a parody of Hollaback's controversial "10 Hours of Walking in NYC," video. The original video, in case you missed it, shows a woman walking through NYC for 10 hours while facing over 100 separate incidents of street harassment from men. Last week, Funny or Die flipped the video's premise to show what 10 hours of walking on the street is like as a man, and now, YouTube user Shinji72 created their own version using the popular video game Skyrim . The video shows a female Skyrim character enduring "street harassment" by passersby. The woman walks through a village past a number of non-playable characters (NPCs), who all attempt to speak to her. Just like the original video by Hollaback that it mocks, some of those characters say pretty creepy things. It eventually takes a humorous turn, showing the woman being harassed by a spider and later a dragon, but for the most part it shows men bothering and following the character.

The motive of the creator of this video isn't totally clear, but what is explicitly stated as a parody actually ends up being quite telling about the nature of real-life street harassment: It's pervasive, near constant, and can get rather disturbing rather quickly.

There's no question that when Skyrim's programmers were working on this particular feature, they weren't thinking about female gamers who might find it triggering or unpleasant. Sexism in video games, as we've all learned thanks to Gamergate, is very prevalent. When critics like Anita Sarkeesian voice their opinions on how women are treated in video games, they get attacked, threatened, and humiliated online for doing so.

I initially hesitated to call this video an example of video game sexism, because the harassment happens regardless of your character's sex. But it would be nice to see video game companies take the idea of catcalling a bit more seriously, and curtail this kind of programming for the sake of every player, regardless of sex.

While it's relatively easy to remind one's self that it's just a video game and the NPCs are simply programmed to talk to you anyway, it's eerily reminiscent of the real experience. Playing these parts of the game and watching this video definitely made me feel on edge.

In an ideal situation, men who watch this parody and see how creepy and annoying it is to be called out by every other person you pass on the street would become more sympathetic to women who endure street harassment. In Skyrim, you cannot walk, as a character, anywhere at any time without facing some sort of visual or verbal scrutiny from the people around you. This is exactly what it is like to be a woman walking down any given street in any part of the world. It's creepy, it's annoying, and it's exactly what Hollaback's video is trying to address.