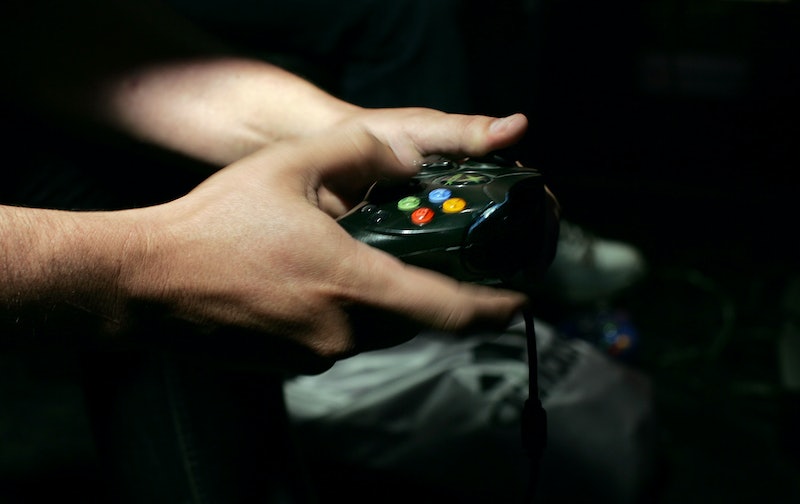 So, on a scale of one to ten, how fed up are you with #GamerGate? If you're not familiar with it, #GamerGate is an online movement ostensibly aimed at eliminating corruption from the world of video games journalism. It's mainly known for the virulent strain of misogyny that runs through it, and the string of women who've been targeted, harassed, and threatened in its wake. And now you've got a hashtag of your own to make your feelings clear: #StopGamerGate2014 is trending worldwide on Twitter, and has been a vital outlet for women in gaming to speak to the ongoing scourge of sexism and harassment.

For the uninitiated, #GamerGate essentially began in early as a heavily gendered witch-hunt against indie game developer Zoe Quinn, who had a number of invasive allegations about her sex life made public by an ex, including the suggestion that she'd dated or slept with a gaming journalist to secure favorable coverage for her game Depression Quest. It wasn't true — the coverage in question doesn't exist — but that didn't stop an avalanche of abuse targeting Quinn, conspicuously wrapped up in her alleged sex life, from being perpetrated by a vocal bloc of the gaming community online.

Since then, it's matured (with the help of places like 4chan, among others) into a boisterous movement on Twitter, with some devotees strenuously insisting they're anti-harassment while also insisting that women who've been publicly threatened are faking it. This is no small matter — multiple women, including Quinn, Tropes vs. Women in Video Games creator Anita Sarkeesian, and Giant Spacekat co-founder and developer Brianna Wu have had to leave their homes due to death threats amid the tumult of #GamerGate, and now, thousands of voices on Twitter are rising in opposition.

Now, I realize that proponents of #GamerGate may bristle at this characterization. And for the purposes of fairness, it must be said that yes, not everyone tweeting on the hashtag is a harasser, or sending out death threats. But when you join a movement as sprawling and decentralized as #GamerGate — no argument is as common as "that doesn't represent us," even though there's no concrete demonstration of what does — there comes a time when the motivations and outcomes need to be soberly assessed.

And at this juncture, #GamerGate's legacy is not anti-corruption, it's anti-woman. It's been laid as painstakingly bare as possible, not just through the work that Quinn had to do on her own, logging hours upon hours of people scheming up ways to harass her, but also through the blindingly sexist willingness of many supporters to assume that women they're actively hounding couldn't possibly be legitimately threatened. It's like a magic lamp with "ethics" scrawled on the side, but when you rub it the genie comes out screaming about lying bitches and their faked death threats.

The relative silence in the face of all this discord has been somewhat hard to reconcile over the past couple of months, so it's reassuring to see people are finally stepping to the forefront, and making their rightful outrage heard — not about how video game writers talk about equality too much, but about how some gamers' reactionary sexism has turned some womens' lives into a living hell. You know, the important things?

So in short, if you're not down with what's been happening to so many women in gaming-related industries — harassment crusades have also been mounted against female games writers like Leigh Alexander and Jenn Frank, as well — there's now a way to log your disapproval. Just say it loud, and say it proud: #StopGamerGate2014.