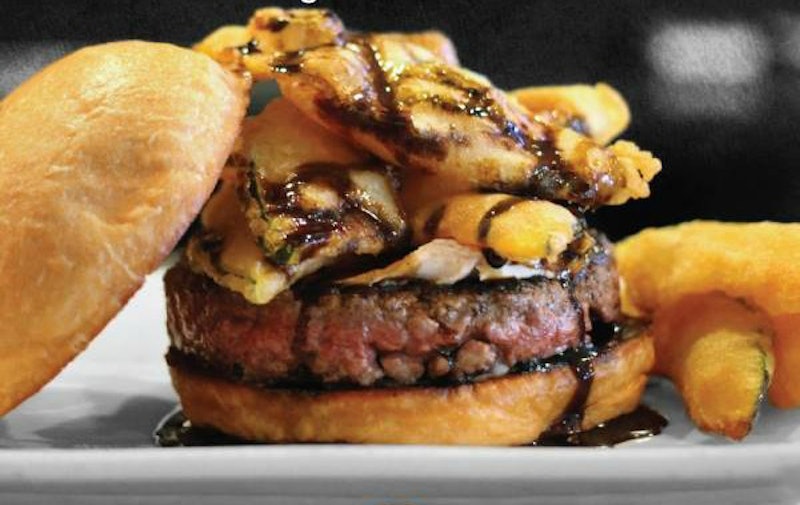 If pumpkin spice as a concept hadn’t jumped the shark already, it definitely has now: Burger joint Umami Burger has created a Pumpkin Spice Latte Burger. You heard me — the PSL now exists in burger form. As much as I love pumpkin and nutmeg, a large part of me wants to indulge in the world’s biggest eye roll and the loudest labored sigh that has ever been heaved in the history of the universe. Because seriously, you guys. A PSL burger is just about the last thing we need right now.

According to Gothamist, Umami’s Pumpkin Spice Latte Burger will hit menus starting November 5; you’ll be able to nab it for a mere $4 its first day on the menu, after which you’ll have to shell out $12. To be fair, it does actually sound pretty tasty — it features their signature beef patty, garlic aioli, tempura Kabocha squash (AKA Japanese pumpkin), and spiced Marscarpone cheese, all topped with a coffee glaze — so, y'know, there's that. And at least they’re also kind of using it to poke fun at the whole PSL/Basic thing that’s been such a hot topic this season; Eater notes that its press release contains the following:

“So on your way to yogilates or Starbucks, pick up the Pumpkin Spice Latte Burger too. And don’t forget to throw on your Uggs. We swear you’ll be OBSESSED after first bite.”

Well played, Umami. Points for that. If you want to try one, it’ll be available roughly until the end of the year.

On a related note, do you know how many posts I’ve written about pumpkin spice-flavored things since the end of August? I don’t either, but it’s a lot. So many, in fact, that, when faced with yet another food offering featuring the ubiquitous fall flavor, I actually thought for a moment that I’d finally run out of weird ways to cover it. But then I realized that maybe I could use my burnt-outedness as inspiration; after all, I can’t be the only one suffering from PSF, or Pumpkin Spice Fatigue, can I? If you’re currently displaying any of the following symptom, you, too, might be a victim of PSF. As a course of treatment, I recommend the liberal application of any other drink, seasonal or otherwise — and quickly. The continued survival of your taste buds depends on it.

1. The scent of cinnamon makes you lethargic.

2. The color orange brings forth an eye twitch of epic proportions.

3. The word “basic” provokes a Pavlovian response in you.

The details of this response may vary; for me, I feel compelled to punch my fist through the nearest computer screen.

4. Your coffee break is no longer a time of joy.

It is now a time of horribleness.

5. Pumpkin pie is so far down your list of holiday food cravings it may as well not even be there.

6. The idea of a peppermint-flavored drink sounds amazing, even if you absolutely hate peppermint.

7. You develop a sudden squash allergy.

This is an especially tragic consequence of PSF, as there are plenty of other squashes out there that are still well worth your time.

8. You’re actually excited about the fact that the December holiday season is already starting up.

You’ll be as sick of it by the time New Year’s rolls around as you are of pumpkin spice season now, but whatever. Bring on the holiday cheer and all that.

More like this
10 Pumpkin Recipes That Are Way More Creative Than Pie & Lattes
By Rebecca Deczynski and Alexis Morillo
On TikTok, Tinned Fish Date Night Is The Latest Viral Food Obsession
By Emma Carey
Bennifer, Kravis, & 14 Other Fun Celeb Couples Halloween Costume Ideas
By Emma Carey and Brittany Leitner
7 Symbolic Meanings Of Autumn — From Letting Go To Self Preservation
By Kirsten Nunez
Get Even More From Bustle — Sign Up For The Newsletter