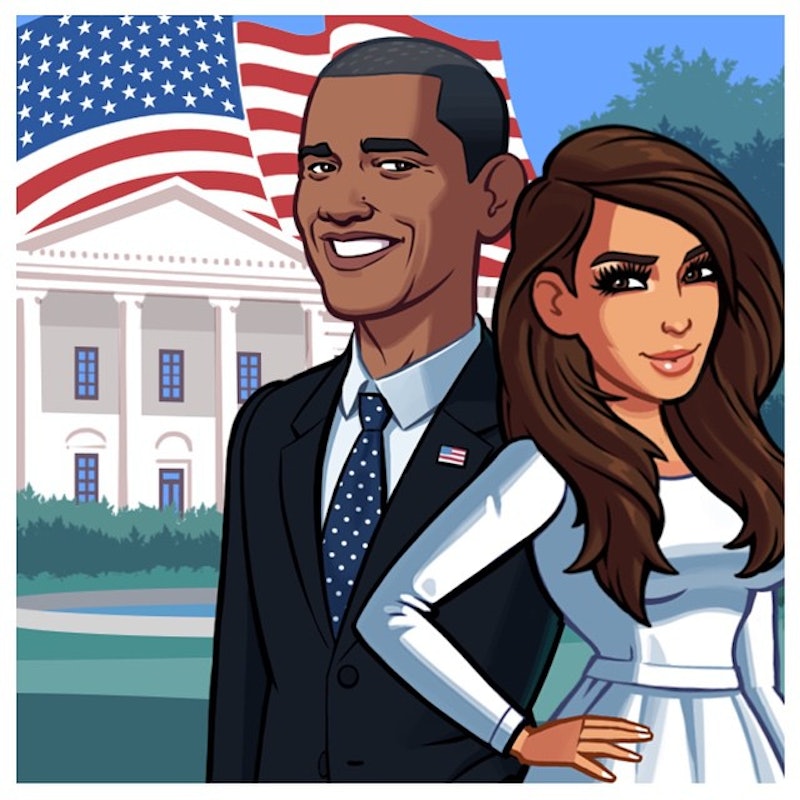 Today is Election Day 2014, which means you have one and only one absolutely undeniable duty: to get on the Internet and make jokes about voting for Regina George. I'm kidding, I'm kidding! Your one and only civic responsibility is to get your sweet self to a polling place to cast your vote in the midterm election, so that your voice can be heard, people can stop saying that Millennials are politically disengaged, and crazy representatives that almost nobody actually voted for can stop having power in your state.

But if you have some time on your hands afterwards, well, taking part in a few Regina George jokes and some other sundry memes won't actively hurt democracy, right? Below, we take stock of the good, bad, and the inexplicable Election Day trends burning up Twitter and Instagram, from sex jokes to illegal selfies. What do they mean for the future of the American electoral system? Do they help or hurt voter engagement? And how does a cartoon of Kim Kardhasian with Obama fit into all of this? I don't know, guys. But I think the Founding Fathers would want us to try to find out. I also think the Founding Fathers would be pretty into Kim K., but that's just my personal opinion. Which I can express in our free country! Isn't democracy cool?

I (and a ton of other tweeters) just can't resist a good "hanging chad" innuendo.

It's easy to think of voting as just another annoying thing that you have to get done between commuting and picking up your dry cleaning today — so placing it in context as a right people have fought for (and continue to fight for) is pretty important.

Hey, you were going to vote anyway, but if an adorable baby animal peer pressures you about it, all the better.

I get it: you're excited about voting, and you're used to Instagramming everything that excites and interests you. But be careful, folks — it is actually full-on illegal to Instagram your ballot or take any picture inside your polling place in Florida, Georgia, Kentucky, Nevada, North Carolina, Texas and West Virginia, and many other states prohibit showing your completed ballot to anyone else, online or IRL. Take a picture with your "I Voted" sticker instead — it gets the same message across, and also shows off your new cute haircut.

Pictures of Other People Voting

I'm sure this doesn't need to be said to any of our smart, law-abiding, ethical, beautiful, and pleasant-smelling readers, but: DO NOT TAKE PICTURES OF OTHER PEOPLE VOTING! It is quite illegal.

Hey, your politically jaded friends need some way to get in on the social media fun, too!

Hey, I'm a Democrat who likes Miranda Lambert! Take that, Chart! But okay, fine, I also like Journey. You win again, Chart!

I saw Regina George volunteering at a poll, so I volunteered at a poll.