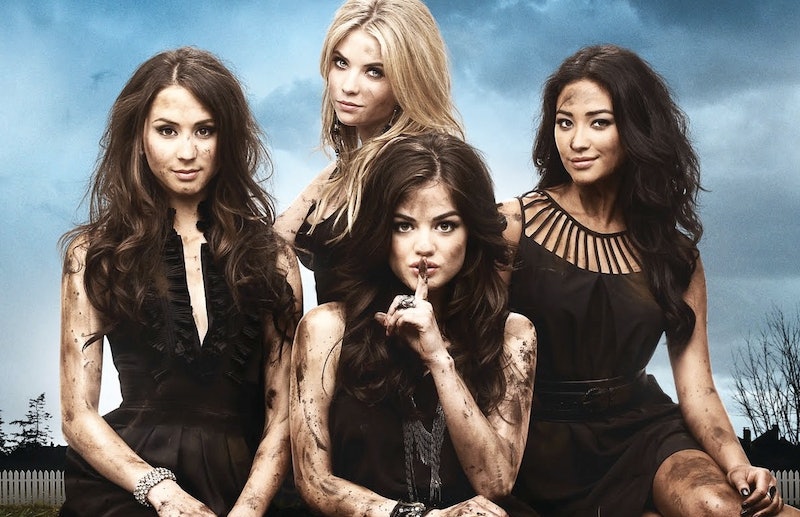 Sad news for the PLL fans, Lucy Hale has revealed Pretty Little Liars Season 7 is the final one. "There's rumors of maybe a movie," the actress behind Aria Montgomery told E! News. "But in seven seasons we'll definitely end the show." So movie or not, everyone's favorite liars will be leaving our TVs in just two and a half seasons. That might seem a long ways off, but I'm already not ready. Although as sad as the end of a show always is, I do think ending it earlier rather than later was a good call.

The danger with having a series built around the discovery of a person is that the longer you wait, the higher the chance is that fans will be disappointed. It happened to Gossip Girl when Dan was revealed as the person behind the website, and it happened to How I Met Your Mother when fans weren't satisfied with Ted ending up with Robin. Pretty Little Liars is too good of a show for me to see it get the backlash HIMYM did when it ended.

It's a tough line to walk when you can't reveal the crux secret of a show, but you also want to keep people invested. At some point, shows like this have to end. They can't have nine or 10 season long runs like Seinfeld or Friends, whose shows were character based rather than plot based. The way PLL has handled this is by giving information very slowly over time and having several fake outs. First Mona was A, then you learned it was bigger than her and there was an A Team of which Toby was involved. Then Ezra was targeted as the head A, then Shana, and now Alison.

There are a million A theories out there, and the longer fans speculate the higher the chance they won't be satisfied with what the writers supply. Dan as Gossip Girl was one of the lamest reveals ever because there was so much evidence against it. Robin as the object of Ted's true affection was almost a slap in the audience's face after they waited eight years to see Ted with the mother.

I appreciate that rather than keep Pretty Little Liars going for the money, the writers are ending it earlier on to bring resolution to the story. I also am glad that the A reveal won't be a last-second add on to the final episode. Producer I. Marlene King told fans they'd learn A's identity before season 7 even starts, so that gives the girls a whole season to grapple with the discovery and move on before the show concludes.

I loved Gossip Girl and HIMYM, but giving the Dan reveal 15 minutes in GG, and killing off the mom in a minute-long montage in HIMYM was insulting. The fact that PLL is revealing early and ending without dragging things on forever, makes me hope that the big reveal will be worth the wait instead of disappointing. It's a risk to plan a show around something like that, but if they can pull it off it'll be just as great as the fans are expecting it to be.