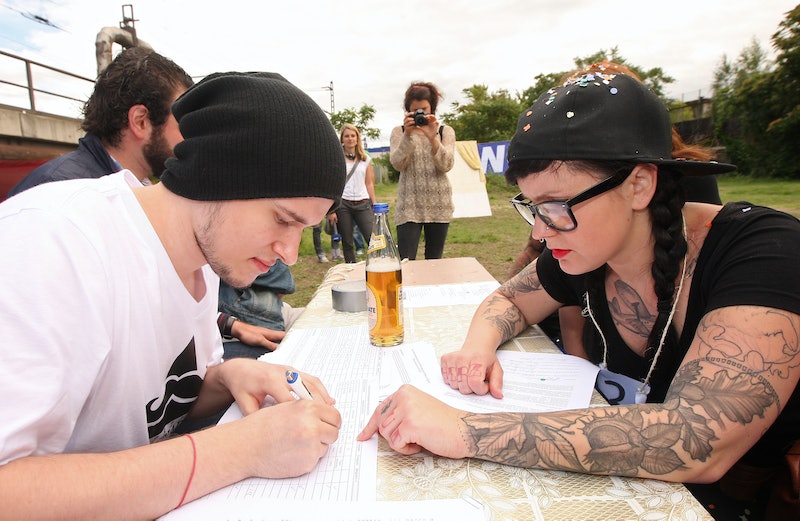 Breaking news, ladies and gentlemen: There is a mathemtical reason all hipsters look the same — and no, it doesn’t have anything to do with the fact that they may or may not come from a factory. Mathematical neuroscientist Jonathan Touboul of the Collège de France in Paris has figured out why and how hipsters all tend to evolve in the exact same ways over time, thus undermining their nonconformist ideas with their unintentionally conformist appearances. His paper on the subject, “The Hipster Effect: When Anticomformists All Look the Same,” was published on October 30, and it’s not at all a joke. Not only that, it’s actually useful. How amazing is that?

The paper posits that a sort of paradox exists such that large groups of people making decisions against the majority — that is, the definition of a hipster — will eventually all end up making the same decisions. The paradox can be resolved, the paper says, with what Touboul calls a “generic phase transition in the system.” According to this generic phase transition, hipsters have a tendency to keep making the same choices when they’re “too slow in detecting the trends”; thus, making the same choices keeps them correlated as time goes by while their trend simultaneously evolves “as a periodic function.” My generally understanding of it is this: When hipsters snooze, they loose because there wasn’t enough time for them to find something different to do before everyone else started doing it, too.

Like most of the other non-science-y, non-math-t people covering this topic, I took one look at the actual paper and glazed over. I know enough about the notation to be able to make a horrible joke about it looking literally like Greek to me…

…But that’s about all I’ve got. However, Touboul sums it up nicely in his conclusion:

“If you take large sets of interacting individuals — whether hipsters, stock traders, or any group that decides to go against the majority — by trying to be different, they will ultimately all do the same thing at the same time. The reason for that is the time it takes for an individual to register the decisions of others. You cannot be aware of what other people decide in real time, it takes a while.”

Or, as Vocativ puts it, “hipsters eventually conform in their nonconformity because it’s virtually impossible to keep up with the trends.” Because the very identity of “hipster” is based on being either an inventor or early adopter of any particular trend, that identity needs to change all the time in order to stay “authentic.” So, as Elizabeth Kulze writes, “at least in theory, an actual hipster is about as real as a unicorn.”

So what can we do with this study from here? Touboul has some suggestions:

“Beyond the choice of the best suit to wear this winter, this study may have important implications in understanding the dynamics of inhibitory networks of the brain or investment strategies finance, or the understanding of emergent dynamics in social science, domains in which delays of communication and the geometry of the systems are prominent.”

That’s right — a study about how hipsters behave can be extrapolated and applied to questions about, say, how parts of the brain work. Who knew? Bonus points to Touboul, by the way, for the dig about the choice of the best suit to wear this winter. I laughed out loud, and I'm not just saying that. Ultimately, though, I suspect the takeaway from the paper for most of us is pretty simple: Just do you. If it’s impossible to follow trends, why bother messing with them in the first place? The only determination of what’s “cool” that mattes is whether or not you like it. If it’s yesterday’s news… who cares?

The Guardian, by the way, came up with a few hipster equations of their own; they’re a little easier to understand than Touboul’s, albeit also a touch less scientific, so head on over there for more. For the curious, they look something like this:

“(Percentage area of neck covered in tattoo ink) / λ + (Pairs of socks owned + Albums owned on CD format) x 100 = Percentage chance of being able to hold an informed discussion on the emerging dancehall scene in Pyongyang.”

You win, Guardian. You win.