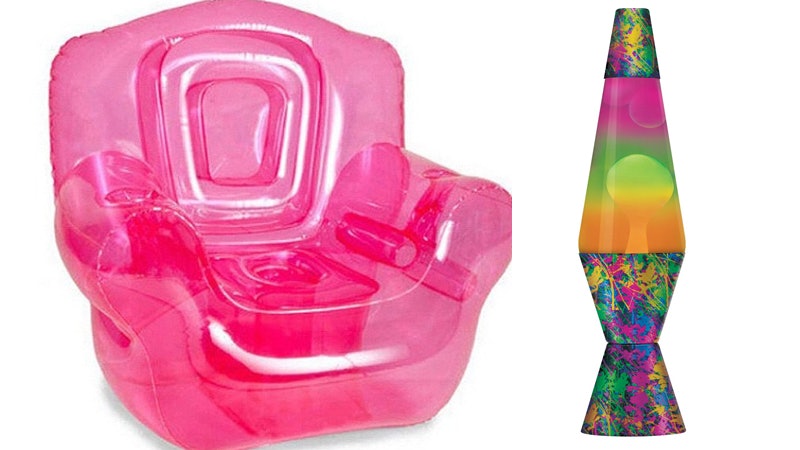 A child’s bedroom is a special place. A place where their freedom reigns, where their style counts, where they’re allowed to stamp their personality all over the walls. Nowhere is this more apparent than in ‘90s television shows. From Clarissa’s eclectic room in Clarissa Explains It All to Arnold’s tricked-out lair in Hey, Arnold!, the main characters featured in most fondly-remembered kids’ shows from the ‘90s had the coolest. Bedrooms. EVER.

Given, then, that our idols had such creative, original spaces to call their own, it’s only natural that we’d all want to make our own bedrooms the best they could be. We each had our own unique spin on the idea of décor — after all, all kids are different — but there were still a number of items pretty much every ‘90s kid desperately wanted in their bedroom. Some of them (inflatable furniture, novelty telephones, and so on) may have been more attainable than others (robots, remote controlled furniture, etc.), but that didn’t stop us from dreaming about them. And most of us probably still remember the things we had as clearly as the things we wish we had.

This Throwback Thursday, let’s take a look at 22 quintessential ‘90s bedroom accessories. How many of these must-have pieces did you have — or want?

There was nothing cooler than having a galaxy on your ceiling when you turned out the light.

Or both. Bonus points if your scented candle came from the Yankee Candle shop at the mall.

7. And Your Own Phone Line

8. A Pet Crocodile In A Kiddie Sandbox, a la Clarissa Darling

I was always too freaked out to sleep in mine, though. Maybe that had something to do with the Cabbage Patch Kids circus design printed all over it. But look! They make grown-up versions of these things, too!

And while we're on the subject of bedding ...

12. A Window Your Friends And/Or Crush Could Climb Through

Returning to Clarissa Explains It All for a moment, remember how Sam always used to just climb in her window when they wanted to hang out? It seemed like an awesome idea — although it's probably also worth remembering how problematic an easily-accessible window could be. Sure, Buffy Summers was able to smooch Angel through hers. By the time season two rolled around, though? Not so good. And would you really want Sydney Prescott’s boyfriend in the original Scream climbing into your window in the middle of the night? No thank you, Billy Loomis. You stay way the hell far away from me.

Cable wasn’t necessary as long as you had the VCR (and also maybe Dawson Leery to go with it.)

Ever notice how so many things from the '60s and ‘70s made a huge comeback in the ‘90s? Lava lamps, beaded curtains, tie-dye, bell bottoms … What was up with that?

Or fairy lights, or holiday lights, or whatever you want to call them. If they had little paper lanterns on them, you really struck the jackpot.

We had some interesting ideas about acceptable bedroom lighting in the ‘90s, didn’t we?

17. Something With Your Name On It

Unless you were able to custom order your personalized object, though, you were out of luck if you had an unusual name. (That would be me.)

Arnold’s room was the best.

All the better to jam to your giant cassette tape collection, my dear.

A safe was preferable, because combination locks were the shit.

If you weren’t allowed something that locked, though, a miniature mailbox worked, too. Did anyone ever manage to get their family or friends to actually leave them notes in theirs?

Mini lockers were the holy grail. They let us pretend we were super cool, high-school-age teenagers … even if we were still under the age of 10 at the time.

Or maybe that was just Screech from Saved by the Bell.