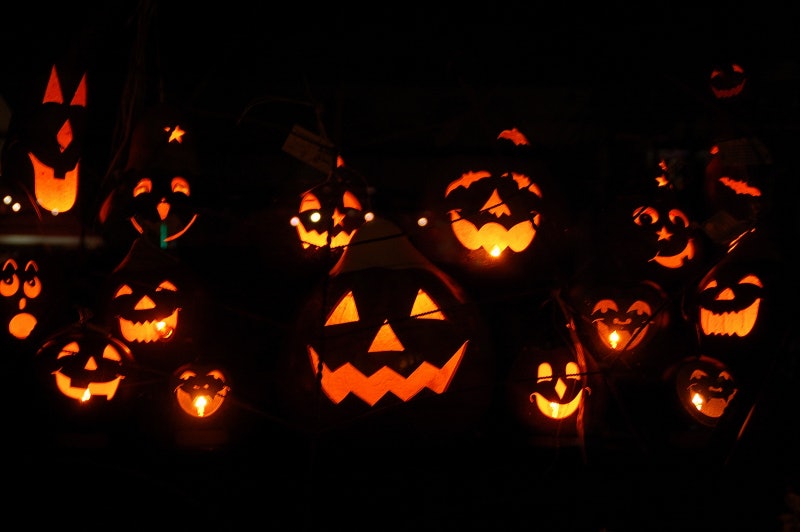 Can you believe Halloween is tomorrow? I can’t — but then again, I find I spend my adult life increasingly in awe of how quickly time passes, so maybe that’s just me. But I’m sure I’m not the only one who gets all nostalgic come October each year, no matter how old I get. Why? Because Halloween when you’re a kid is awesome.

When you’re young, you spend the entire month of October (and often a good deal of September, once you got past the whole back-to-school thing) planning out every last detail: Making your costume, figuring out your trick-or-treat route, using issues of TV Guide to keep track of when all your favorite Halloween movies and TV specials were going to be on, and so on. These days, I would imagine cell phones and the Internet have made it even easier to work everything out — but back then, we had to rely on maps, parental supervision and/or trust and our own ingenuity to make the most of the season.

So today in honor of Throwback Thursday, let’s take one more look back at the seasonal spookiness that made up our childhoods as we fondly remember 20 of the best things about Halloween in the '90s. After all, you’re only young once — and those of us who were kids during that decade definitely lucked out. Happy Halloween, everyone!

The year I mastered the pattern that had a silhouette of Jekyll on the front and cast a shadow of Hyde on the wall behind the pumpkin was a glorious one, indeed. They’re still around, so grab yourself a kit here for nostalgia’s sake.

OK, so technically they weren’t actually called McBoo Pails… but I mean, come on. “McDonald’s Halloween Buckets?” Talk about a missed branding opportunity. As Dinosaur Dracula points out, there’s something similar available this year at the fast food chain as a tie-in for the movie Book of Life ; it’s not quite the same, but it’s better than nothing.

Because anthropomorphic McNuggets weren’t enough. They had to be decked out in all their seasonal finery, too.

Bonus points if the first place you saw it was in the September/October issue of American Girl Magazine.

I definitely made myself a die costume one year. I went trick-or-treating with a friend who made the Jelly Belly one. If that isn’t the epitome of Halloween in the ‘90s, I don’t know what is.

6. The Halloween Episodes of All Your Favorite Shows

Obviously they still make Halloween episodes today (hi there, Pretty Little Liars), but there was something about the ones in the ‘90s that will always have a special place in my heart. I still think “The Shinning” from The Simpsons’ 1994 edition of Treehouse of Horror (number five, for those keeping track) is one of the funniest damn things I’ve ever seen.

You got to wear your costume and eat junk food… at school. It didn’t get much better than that.

And while we’re on the subject:

I’m not sure whether it was more fun to show your costume off, or to look at all the other costumes the kids at your school came up with. Some of them were pretty creative.

This one for Nestle Quik hit the small screen in 1992. Clearly all Max really needed to do to get a handle on the Sanderson sisters was mix up a glass of chocolate milk.

Whether you encountered them at your school Halloween party or at the killer one your BFF threw every year, you know what I’m talking about: You’d put on a blindfold, then be led to bowls full of “eyeballs” (peeled grapes), “brains” (cold spaghetti), and more. We had to get our gross-out yuks somehow, right?

I used one of these as my trick-or-treat bucket until I was about 11. Then I decided I was too old for it and swapped it out for a pillowcase… but still secretly wished I had my trusty plastic pumpkin with me anyway. Ah, the callowness of youth!

12. The Year Everyone Dressed Up as Ghostface

Remember back in 1996 when Scream was new? Good times.

Dawn and the Halloween Mystery came out in October of 1994, and Stacey and the Haunted Masquerade came out a year later in 1995. If you weren’t into Fear Street or Goosebumps, they were an excellent way to get in some pop culture Halloween reading without terrifying yourself to death.

14. Coming Up with Your Trick-or-Treat Plan

15. The First Year You Were Allowed to Trick-or-Treat Without Parental Supervision

Being allowed to trick-or-treat alone with your buddies for the first time was a big deal, especially in the pre-cell phone era. My dad (bless him) always waited in the car somewhere nearby, juuuuuuuuust in case — but even just the illusion of freedom was cause enough for celebration.

TIL time: The Trick-or-Treat for UNICEF program was first created in 1950 by a Presbyterian minister and his wife from Philadelphia. Its first year, it collected $17 from the couple’s neighborhood; since then, it’s raised over $188 million worldwide. Although an eco-friendly print-your-own label has largely supplanted the box itself these days, it’s still around — the image above is from 2011. It’s also definitely still a worthy cause. It’s how I learned what UNICEF was when I was a kid, and I’ve no doubt it’s continued to introduce future generations to it as the years have gone on.

17. That One House in Your Neighborhood That Went Totally Balls to the Wall with Their Decorations

Maybe they made a home haunt, or maybe they did the ‘90s version of this — either way, that house was always worth the trip. In fact, it was second perhaps only to this one:

18. That One House in Your Neighborhood That Always Gave Out Full-Size Candy Bars

None of this “fun-size” nonsense. We’re talking Milky Ways, Snickers bars, and more, all in magnificent, full-sized glory. Our dentists hated that house, but we loved it.

The main event may have wrapped up sooner rather than later, but the night was far from over once the actual trick-or-treating was done. The very last thing everyone had to do? Gather together and sort and swap your haul. The experience wasn't complete without it.

20. Having a Hoard of Treats Squirreled Away — and Making It Last as Long as Possible

My parents stuck to pretty strict rules with my brother and me in the month or so post-Halloween — they allowed us to eat two small pieces from our trick-or-treat haul after dinner each night. This was a good call on their part; not only did it keep us from overdosing on sugar, but even better, it taught us the benefits of delayed gratification. With these rules in place, our hauls lasted us almost into December. I’d call that a win.