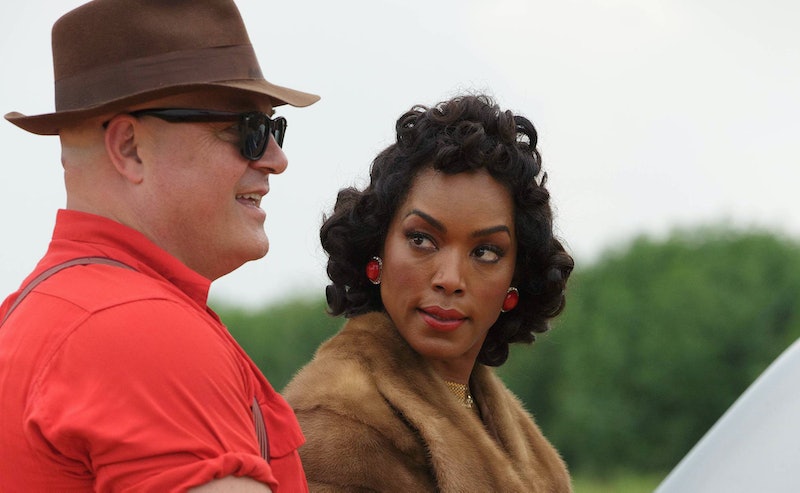 You don't hire Michael Chiklis to play a nothing, throwaway character, even on AHS, where many talented people have been hired to play throwaway parts. But Freak Show is, so far, the most tightly plotted season of AHS yet. The only shame is after introducing Chiklis' Dell and Angela Basset as his wife Desiree in the second episode, they've already been totally sidelined when their storyline was so interesting. But in the trailer for "Pink Cupcakes," we see that Dell is waving around a loaded gun and I can't help but wonder if Dell will hurt Desiree on AHS.

Dell might not be considered a "freak" by the populous of Jupiter, but he's a total control freak. Go back and watch Chiklis in his scenes so far: When he's controlling the situation, he's calm, even charming. But as soon as someone else tries to tell him what to do, boss him around, or make him feel powerless, he strikes out violently in some way. So far, he hasn't done anything much worse than beating up Jimmy, but since the last time we saw him, he was storming off after talking to Ethel, it's clear that he's got a lot of anger and insecurity building up.

A lot of viewers have noticed that Dell seems to be attracted to women who possess masculine features, from Ethel's beard to Desiree's "extra bit of business," and that his aggressions might be stemming from a sexual identity crisis. But Ryan Murphy admitted in an interview with EW that he never intended to imply that Dell was wrestling with the idea of being gay. But Dell has been suffering from some sexual inadequacies and insecurities that have led him to strike out at other men whom he perceives as targets, from attacking his son by sending Meep to prison to killing the gay men Desiree offered to "help" by having sex with them.

Dell is suffering from impotence in every area of his life, from his inability to have sex with Desiree to his control over the freak show, which is waning considerably from his strongman strong-arm in his first episode. He's not even close to being a leader of these people. Elsa is still their boss, Jimmy is the one they listen to, Ethel is the one whose wisdom and experience they trust, and everyone agrees that Dot & Bette are the star attraction. But who's the only member of the show who's actually ballsy enough to call Dell out? Desiree.

And since Dell has proven that he's abusive in the flashbacks where he sells tickets to the birth of his son to make a quick profit, then attempts to kill that same son because of his hands, he might not hesitate to make Desiree the target of his rage. Hopefully, she's not afraid to fight back, because we need more of Angela Bassett's inappropriate one-liners:

More like this
Everything To Know About The Bear Season 2
By Brad Witter
Where Was 'Only Murders In The Building' Filmed? The Arconia Has A Different Name IRL
By Radhika Menon
Winona Ryder’s Impact On The Set Of 'Stranger Things' Goes Beyond Just Her Acting
By Radhika Menon
Everything To Know About True Detective Season 4
By Brad Witter
Get Even More From Bustle — Sign Up For The Newsletter