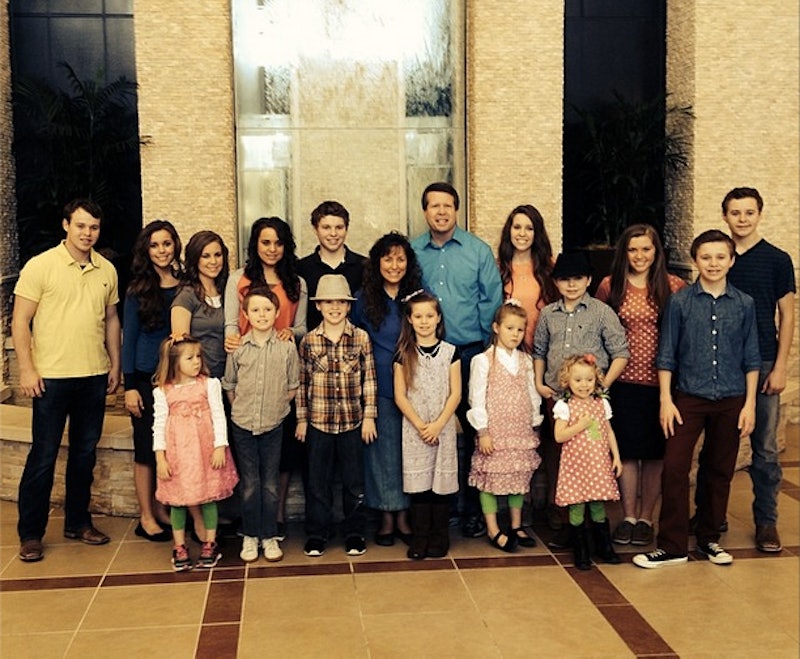 If you know anything about TLC's 19 Kids and Counting , it's probably that all of the Duggar children have names that start with the letter J. OK, fine, you probably know more than that — specifically that Jessa Duggar didn't kiss her husband at their wedding (it was because of a very sweet reason) and that Jill Duggar is expecting a baby boy (congrats, girl). You might even know why all of the Duggar girls have the same hairstyle, but do you know why the Duggars' names start with "J"? Michelle and Jim Bob's reasons for choosing 19 names that begin with the same letter (with the exception of Jinger, which they just straight-up created on their own) is actually pretty easy to understand.

No, it's not because they're obsessed with the tenth letter of the alphabet. In a blog post from Feb. 2012, back when 19 Kids and Counting was in the middle of its sixth season, Michelle Duggar explained why she and her husband decided to name all of their kids with "J" names. It all started, unsurprisingly for the extremely religious family, with the bible. According to Michelle, "There's no quick answer, but it started with our first child. Emotionally, we loved the Bible name Joshua. So we named our first child Josh after him." The family's matriarch continues to explain that she and Jim Bob planned to name their next son Caleb, because Josh and Caleb "hung out together in the Bible." But, obviously, things changed.

Michelle writes about going on birth control, getting pregnant, and miscarrying before she became pregnant with twins, John-David and Jana. And, well, the idea of naming their son Caleb kind of went right out the window. "We loved the Bible name of John," Michelle writes in her TLC blog about naming the twins, "My grandmother's name was Ana, and we put the J on the front." But, why add that J? The reality star doesn't say at this point, but she does reveal that Jana was named to honor her grandmother and Ana in the Bible because she "was a great person."

So, when does she get to the point? Honestly, I think Michelle and Jim Bob didn't realize the precedent they'd set until Michelle became pregnant with her fourth child, who'd later be named Jill. The mother of 19 says that she and her husband didn't plan this at all when they first started having children, but once they started, they couldn't just stop.

"Well, if this is the last baby that we have it would be terrible if we had Josh, Jana, John, and ... Marianne. Because they might say, 'Why didn't you name me with a J?'" Michelle writes about what she and Jim Bob considered when she became pregnant with Jill. And so, that's how the tradition was born — after giving three children names that started with J, Michelle and Jim Bob didn't want their other 16 kids to feel left out.

That's one way to eliminate sibling rivalry, I suppose.