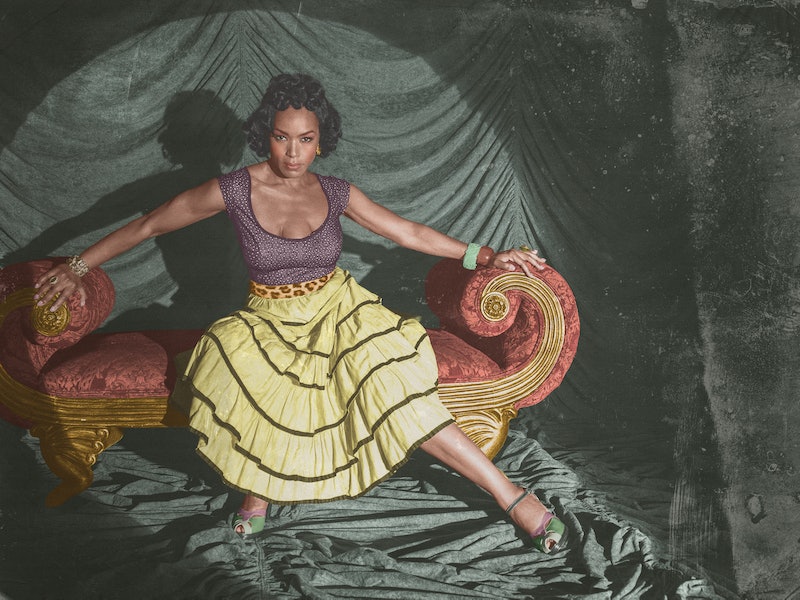 When American Horror Story: Freak Show killed off Twisty the demented, deformed clown murderer, I was amazed that they hadn't let him stick around a while longer while he terrorized Jupiter. It proves that this season no characters are safe — especially once we learn what makes them tick. So I'm worried, because the next episode will dive into what happened in Desiree DuPree's past, and she's barely had any screen time yet and I'm terrified AHS will kill off Angela Bassett before she shares another scene with Kathy Bates. The official synopsis for AHS' "Pink Cupcakes" says that Desiree will find out that she's not the "medical oddity" that she believes herself to be. All we've heard from her so far is that she believes that she's a "genuine hermaphrodite," so what could possibly explain that news? Well, guessing AHS plot twists may be futile, but it's extremely addictive so here I go:

She Either Is or Isn't Intersex

Intersex is the medical term for someone "born with a reproductive or sexual anatomy that doesn’t seem to fit the typical definitions of female or male." When Desiree is examined by a doctor, maybe they find that she just has a really uncommonly shaped vulva or very prominent clitoris. Conversely, her claims of having both "lady parts and a ding-a-ling" could be true, as many people are born intersex each year.

But Desiree might be shocked to find out that she's not actually a "hermaphrodite" — which would mean the presence of both male and female genitals — because that isn't possible in humans.

She Was Subject to Experimentation

Many characters on American Horror Story find out that their past holds conspiracies and terrors kept secret. As we all know, most three-breasted women were not born that way. And the government of the 1950s was even more possessive than that of 2014 about policing women's bodies. Exaggerated to American Horror Story standards, that could mean an enterprising mad scientist could have had his way with her and surgically altered her into her current "freaky" state.

Plus, many individuals born intersex are assigned a gender or subject to cosmetic surgeries to make them appear more like one gender when they are infants. Desiree may have been born with genitals that a doctor deemed "looked" female so she was raised as a woman, even though she could have a Y chromosome or internally have male sex organs.

Maybe she's a grifter with more in common with Emma Roberts' Maggie than the rest of the freak show. She may have put together a disguise that she thought could fool any doctor, but maybe she'll be exposed as a fake and run out of town, and we'll find out why she wanted to live her life working in freak shows.

She Was Exposed to Radiation

One thing that can cause uncommon genetic mutations and abnormalities is exposure to some form of radiation. But radiation can also cause terminal illnesses such as cancer… and that would certainly be a health scare. Maybe she was raised in the Southwest, home of many nuclear bomb trials. It would be a nod to horror films like The Hills Have Eyes.

It's a pretty outside guess, but, given that this is American Horror Story, they've gone for weirder stuff before.