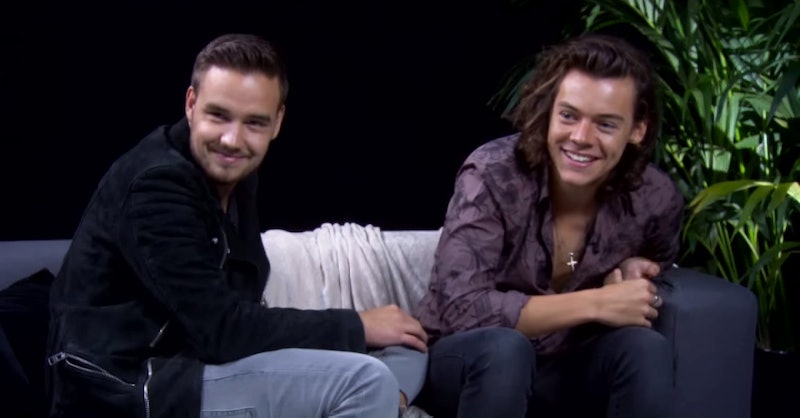 This really goes without saying, but I'm going to go ahead and say it anyway: Harry Styles is perfect. Recently, Styles effortlessly shut down fellow One Direction band member Liam Payne after Payne foolishly felt the need to reassert his heterosexuality during an interview with ODE. Here's what happened: Because 1D's new album is called FOUR, a fan from Twitter wrote in and asked the guys to list their "four favorite traits" in a woman. Payne spoke first (though, as it turns out, he really shouldn't have spoken at all): "Female. That's a good trait," he said. Styles made a face and shook his head before interjecting, "Not that important." See? I told you he's perfect.

Of course, there are a couple of different ways to interpret what happened here: it's possible that Styles meant that there are far more important traits to consider than gender when looking for a romantic partner. (And I would tend to agree!) But it's also possible that he was simultaneously responding to Payne's annoying habit of needlessly reasserting his heterosexuality. Hmm. Skip to the 2:20 mark in the video below to watch it all go down.

Most recently, Payne took to Twitter in September to address rumors about his sexuality, writing, "I'm 100 percent not homophobic. But I'm also 100 percent not gay..." (and he's written similar things in the past). Now, I realize that it must be incredibly difficult to have fans and the media in your business all the time. Truly, I can't even begin to imagine how frustrating that is. But did Payne really need to tell all 18.4 million of his Twitter followers that he's "100 percent not gay"? Uh... congratulations? Who cares if some people think you might like dudes? How does that hurt you? Payne's behavior makes him appear both insecure and immature. I'm so glad that Styles called him out on it (or appeared to, anyway).

Listen, Payne: You're a member of the biggest boy band in the world — there are going to be rumors about your sexuality. (Unfortunately, it's just a part of being a celebrity.) And like it or not, how you choose to deal with those rumors is important. Do you let them run off your back because you know that they're silly and have absolutely no bearing whatsoever on your actual sexual orientation (whatever that may be)? Or do you fight back against them as if someone had just accused you of perpetually smelling like cheese and garbage, taking every possible opportunity to clear the air?

Payne would do well to learn from Styles' (perfect) example.