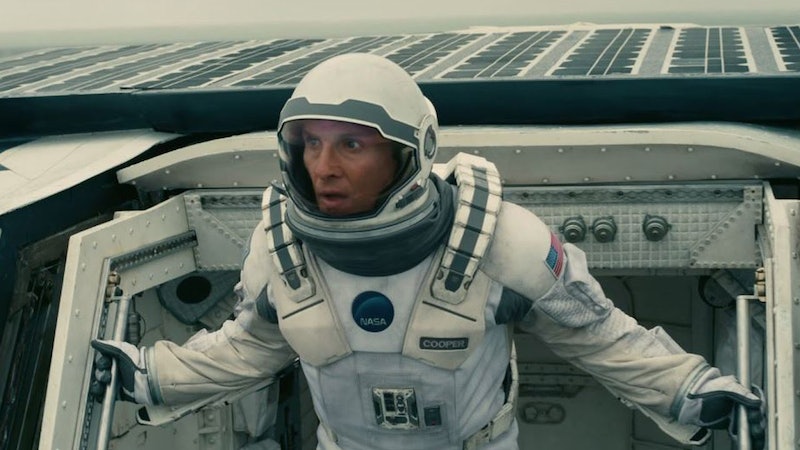 (Warning: The following article contains major spoilers for Interstellar). If you didn’t study quantum physics in college — or, at the very least, spend a few too many sleepless nights wigging out to YouTube videos far beyond your comprehension — you might be a tad thrown off by some of the scientific concepts presented in Christopher Nolan's latest film, Interstellar . For the most part, this won’t get in the way of your enjoyment of the film. Every so often, Matthew McConaughey shouts about gravitational forces or “sling-shotting” spaceships… as long as you maintain a roll-with-it attitude, you should be fine. But there’s one concept that demands a bit more intellectual investment from viewers: that of the fifth dimension.

Throughout Interstellar , you hear mention of “beings from the fifth dimension” communicating tacitly with the crew — that being McConaughey, Anne Hathaway, David Gyasi, and Wes Bentley — from “the beyond,” abetting their mission to save the planet Earth with a few big favors (like the craft and convenient placement of a wormhole for efficient trans-galactic travel). Once you hit the film’s conclusion, reached only by a trip through a black hole that lands you smack dab in the middle of an encyclopedia-lined infinitum, you learn (or, for the crafty lot of you, are validated in your predictions that) said “beings” are not quite enigmatic creatures from an unidentified race, but Matthew McConaughey himself. Okay, so both apply.

McConaughey begins his journey through a climactic sequence that’d make Steven Moffat blush as perplexed as any viewer might be. Through Bluetooth conversations with his robot pal TARS, though, McConaughey gradually gains an understanding of the situation that has befallen him: he has evolved, in a manner of speaking to a state of physical occupation of the fifth dimension, and as such can see past, present, and future all at once, strung together in the shape of an ever-expanding Escher painting.

At some point during McConaughey’s ascension to epiphany, it’s easy to lose track of what, in short, is going on. Without at least a bit of preexisting knowledge about the expansive concept that is the fifth dimension, the dry writing of the Nolan brothers doesn’t exactly have the learning-friendly effect of Mr. Wizard.

So what exactly are we dealing with come time for McConaughey’s expedition? Here’s a feeble attempt at an explanation, running through the first four dimensions in a fashion that might best articulate Big No. 5.

Before you consider the dimensions, you must consider the basic unit of all things in this or any known universe: a point. The concept of a singular finite point. Keep hold on that idea. Now, here we go.

Dimension No. 1: A line. Any line. A line that stretches from one point to another, without any width to speak of. As an abstract concept, we can grasp this easily, but such an entity is not really existent in the way we perceive the world, as everything in our practical lens has tangible length and width (no matter how small).

Dimension No. 2: A plane — that comes to be when you add width to the line. As such, a plane can exist as a flat surface viewed straight on: a floor, ceiling, tabletop, television or movie screen and the images thereon (although worldly context often grants us the ability to “see” these latter images with an additional layer). Although a plane is even easier to imagine than an impossibly thin line, it still can’t quite exist in the reality we know, as everything on Earth, even sheets of paper, has some degree of depth.

Dimension No. 3: Space. This one’s ours. Just as a line becomes a plane when you tack onto it from the side, a plane becomes an object in our special world when you “inflate” it from another angle. We see everything with length, width, and depth — but that’s it (and yes, there are other gradients that can be applied to physical entities… that begins with the Fourth Dimension, and gets increasingly complicated).

Dimension No. 4: Time, essentially. Picture yourself at this very moment. Now, imagine yourself five minutes ago — or five days, or five years, or (if you want to really blow your own mind) five centuries. To grasp a world observed from the Fourth Dimension (as ours is from the Third), picture each of these variations of yourself as physically connected along the line of time. Though it’s tougher to picture, the jump from D3 to D4 exists in the same fashion that the previous jumps (D1 to D2 and D2 to D3) do.

Think of it as such: If you view the abstract concept of a line from another angle, you’ll see a plane — a revelation that the unfeasibly thin collection of points you once saw was only one facet of the physical object you had been observing: a measure of its length.

Do this again when you shift from looking at a plane to looking at a standard object or person. The plane was a motionless vantage point of said thing, a representation of one side of it (that containing its first two dimensions) without perspective of its depth. Turning physically to look beyond this single face brings you to Dimension 3.

Perform that same song and dance once more and you’re in Dimension 4, no longer looking at an object from the single face of its three special dimensions. Just as you saw a line, retroactively, as one face of a plane, and a plane as one face of an object, any object as we know it is really just one face of a timeline. If you were to stand outside of time and shift rapidly across a given line, you’d see all the conceivable iterations of that object — its past, present, and future incarnations, like a flipbook. Imagine those singular frames strung together endlessly (meaning, for us in both directions. Picturing an object as such gives you a view from the Fourth Dimension. Trippy, I know.

Dimension No. 5: The dimension in which we find McConaughey come the bookcase sequence. If you can fathom it, step outside of the Fourth Dimension, separating further from the viewpoint of endless physical manifestations. See, those endless physical manifestations are themselves only one face of an entity — that which might be described as possibility.

Picture a timeline as an expression of one set of possibilities spawning from any singular moment — a graspable example: start with your moment of birth, and track your life as a collection of moments (faces on that never-ending “you” as observed from the Fourth Dimension) all strewn together. Now, turn once more. Imagine this line as itself one face on an object made up of lines of the like — all of the possible lines of moments/faces that might spring from that initial point. Every conceivable thing that could happen after Point A (your birth) gets its own line, and each of these lines is a face on the Fifth Dimension’s view of “you.”

That, in effect, is what McConaughey sees from his daughter’s bookcase… though his focus on a singular timeline as opposed to all possibilities, and his manipulation thereof, call into question transition into the Sixth and Seventh Dimensions, which are tough eggs to crack (more so, even, than Eight, Nine, and Ten). But luckily, Nolan doesn’t dive too deep beyond a brief hiccup in theoretical consistency here and there. So we can rest our studies here and not worry about anything beyond No. 5… until the sequel, that is.

More like this
How To Stream 'Bros'
By Morgan Leigh Davies
Gabby Petito’s Family Responded To The New Lifetime Movie About Her Final Days
By Grace Wehniainen
What Is Miles Teller’s Net Worth? The 'SNL' Host's Bank Account Is No Joke
By Meg Walters
20 Photos Of The 'Hocus Pocus' Cast Then & Now
By Radhika Menon
Get Even More From Bustle — Sign Up For The Newsletter