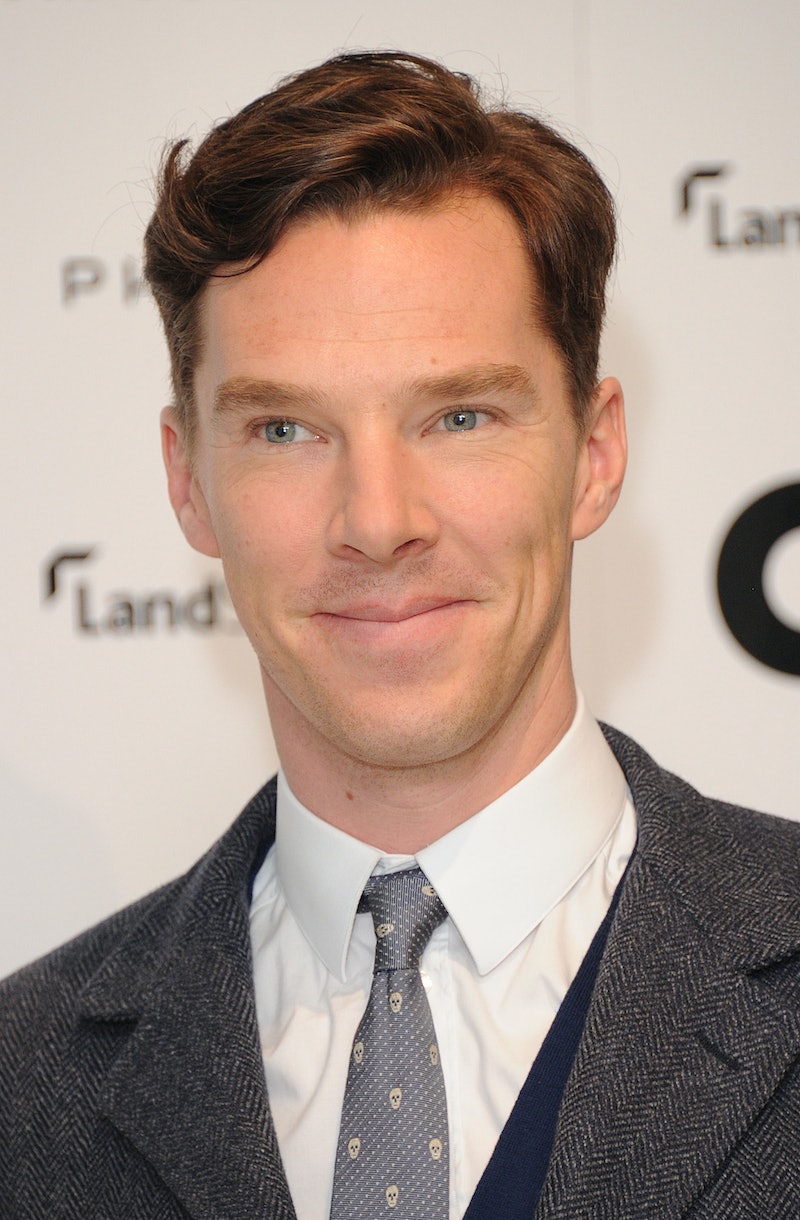 In news that ranks right up there with the Brangelina wedding and Ryan Gosling having a baby, there's the report that Benedict Cumberbatch is engaged to Sophie Hunter. It's a very sweet story of two co-stars meeting and falling in love, because who can help but fall in love with him? Among his many attributes is Cumberbatch's way with words; he makes just about anything sound wonderful with his languid, poetic sentences. So imagine then, what Benedict Cumberbatch has to say about love. I guarantee it's every bit as wonderful as you'd think it would be.

The 38-year-old actor is beloved on the Internet and has millions of fangirls, (but they're all taking the news surprisingly well). I guess it's not that shocking because Cumberbatch is such a genuinely nice guy, that you can't help but be happy that he's found someone to share his life with. Cumberbatch has stayed out of the limelight for the most part and keeps his personal life private. But though he hasn't even been seen in public much with Hunter, he has talked about what he finds attractive in women and what he looks for when it comes to love. So you can assume Hunter meets all these qualifications and more.

"A WOMAN WHO KNOWS THAT SHE DOESN’T HAVE TO GET ALL DECKED OUT TO LOOK GOOD IS SEXY. A WOMAN WHO CAN MAKE YOU FEEL SMART WITH HER CONVERSATION SKILLS IS ALSO SEXY. I BELIEVE THE SENSE OF HUMOR IS IMPORTANT."

I'm with him, good conversation skills and humor are essential.

"I ALSO THINK SOMEONE WHO IS GOOD AT WORKING WITH OTHERS IS SEXY. IT’S LIKE PLAYING A TENNIS DOUBLES MATCH. YOU NEED TO BE ABLE TO WORK WELL TOGETHER IF YOU ARE TO STAY AS PARTNERS FOR A LONG TIME.’

Oh, the Brits and their tennis.

"THERE'S NO OTHER WORD THAN THAT."

In this recent word association game with Elle magazine you can practically see him thinking of Sophie Hunter when he thinks of the word "love."

"I WISH MY 15-YEAR-OLD SELF HAD KNOWN ABOUT MY ALLURE TO THE OPPOSITE SEX!"

"LOVE AS THOUGH YOU’VE NEVER BEEN HURT, SING AS IF NO ONE IS LISTENING!”

This is originally a Mark Twain quote, but it's also the motto Cumberbatch says he lives by.

"TO FIND THE RIGHT PERSON? THERE’S ALWAYS A WAY ISN’T THERE—AND I DON’T MEAN THE INTERNET ... THERE ARE ALWAYS MOMENTS AND MEETINGS AND CHANCE ENCOUNTERS."

You heard it here, Internet dating is not the only answer.

"METAPHORICALLY SPEAKING, IT'S EASY TO BUMP INTO ONE ANOTHER ON THE JOURNEY FROM A TO B AND NOT EVEN NOTICE. PEOPLE SHOULD TAKE TIME TO NOTICE, ENJOY, AND HELP EACH OTHER."

If we all paid attention more, maybe we would just bump into our soul mates and get to skip Internet dating all together. Cumberbatch is so wise.

Yes, this is a real Benedict Cumberbatch quote, not a line from some Sherlock fan fiction. The actor was explaining how he sees Sherlock being in bed and chose to answer in the first person to drive his fans insane. Sophie Hunter is a lucky woman in many, many ways.

"I WOULD LIKE TO FIRST GET TO KNOW [MY] PARTNER AND BUILD A TRUSTING RELATIONSHIP BEFORE MAKING THE COMMITMENT."

“LOOKING FOR HAPPINESS IS A SURE WAY TO SADNESS, I THINK. YOU HAVE TO TAKE EACH MOMENT AS IT COMES.”

Very important for everyone to remember, not just those in relationships.

See? Even Cumberbatch had a hard time finding his soul mate. But he did, and hopefully we all will—it just won't be with him. (Unless you're Sophie Hunter.)

So there you go.

That's how Benedict Cumberbatch feels about love (and sex), and it's marvelous.