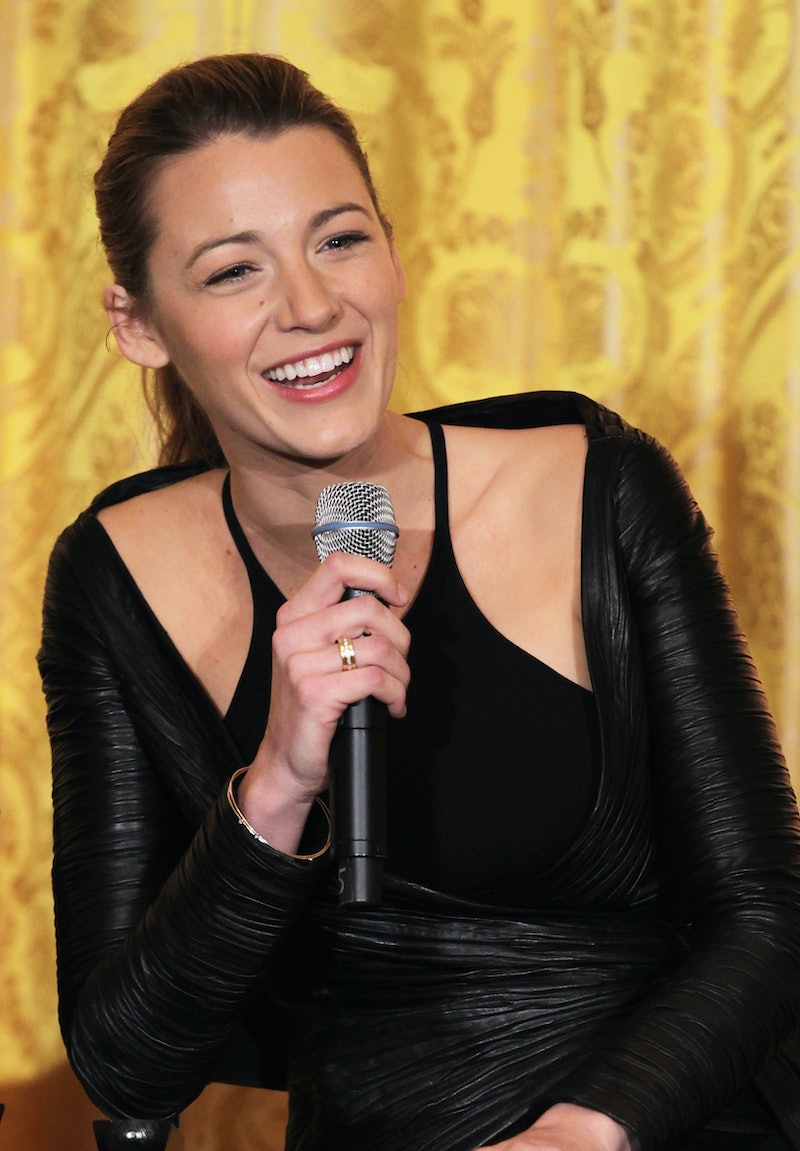 When it comes to the question of whether Blake Lively is having a baby girl or a baby boy, it sounds like she and husband Ryan Reynolds are just as in the dark as you. (Which, really, isn't that weird, because why are you tryna get all up in Blake Lively womb anyway?! Oh, you just want to know if she's having a mini Serena or a mini Dan? OK, that's fine then.) According to a source who spoke with Us Weekly, "Blake and Ryan aren’t finding out what they’re having. They want to be surprised!" Wow. That source gets right to the point! Tease us a little, source. Is Lively hoping for a girl while Reynolds wants a boy? Is Preserve Kids on the way? Come on!

Keep in mind, we don't know for sure if the couple not finding out the gender is true. Neither Lively nor Reynolds have come out and said that they aren't going release a bunch of either pink or blue balloons from a box, be clearly disappointed in the outcome, and post the video online, (*cough*Snooki*cough*) so this could just be a rumor.

But! If you think that the gender may still be revealed, there are a few hints you need to look for:

Lively revealed her pregnancy through a photo shoot on her website Preserve, so be on the lookout for a series of rustic photos in which Lively and her friends hold an outdoor party which ends with a purposely grainy photo of Lively carrying a single balloon that either reads "it's a boy" or "it's a girl." Also be on the lookout for any how-tos involving how to make a gender reveal cake that has a certain chic old-timey charm rather than bright blue or pink frosting inside. Look out for phrases like "a calming lavender flavor will reveal a girl" or "chipotle chocolate icing means a boy is on the way."

Does Preserve suddenly have an influx of ponchos for baby girls or salt boxes that can complete every little boy-themed nursery? These are clues, people!

Paparazzi love to catch celebrities shopping for baby clothes. It's weird. But if you see a pic of Lively and Reynolds holding up a

The Signs Are All There

Did you hold a mirror up to Blake Lively's face for at least a minute and her pupils dilated? She's having a boy. Did you feed Blake Lively garlic, but she did not smell like garlic after eating it? It's a girl.

So there you have it! Now you will know for sure when Blake Lively announces her baby's gender! Haha JK. You'll never know.