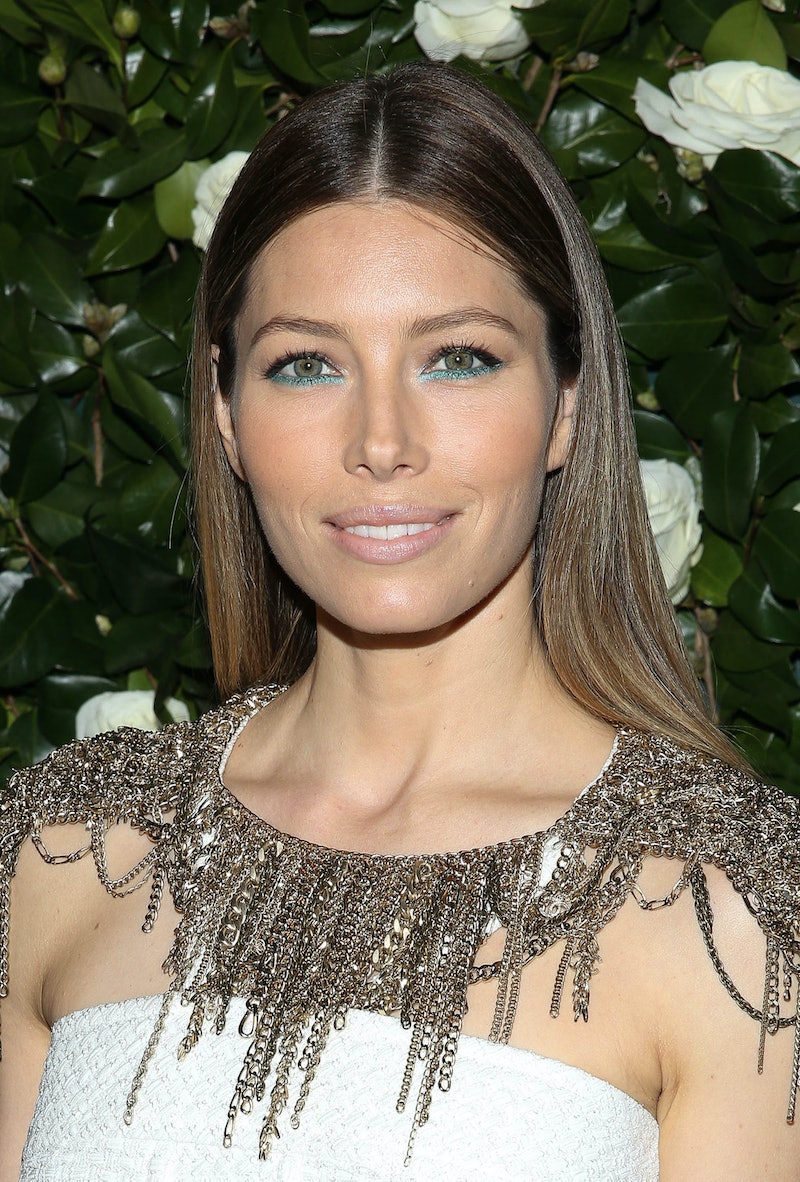 Hold the phone, stop the presses, and find some coffee to spit out in shock at the information I'm about to share with you. Jessica Biel is officially pregnant, as her husband Justin Timberlake confirmed in the cutest Instagram that has even happened. Alright, so we may have already started picking out baby names, cause these baby rumors have been swirling for a while. However, this doesn't make the the news any less exciting. 'Cause now I can officially start raking through the muck of the Internet in hopes of finding out when Jessica Biel is due. Won't you join me?

In the words of Aretha Franklin in her anthemic song "Freedom," "let's go back, let's go back, let's go way on way back when." Back to the when this child was no more than hypothetical baby bump in the celeb news headlines. The press began to speculate that Biel was starting to show in early October. She was photographed at Bondi Beach alongside her hubby Justin Timberlake, sporting a slightly more sloped belly than usual, but sometimes these supposed baby bumps are just post-burrito tummies in disguise.

According to WebMD, most women pregnant women start to show in their second trimester. Now that we know her pregnancy is confirmed, rather than Chipotle swell, she was potentially at the three month mark in the Bondi Beach pictures. Later on in October, a source close to JT and JB dished to Radar Online that the actress was "at least three months pregnant" which would substantiate the little theory I'm building.

Later on the very same month, InStyle editor and Biel's pal Ariel Foxman posted a picture to his Instagram congratulating Biel on her pregnancy. Foxman let the proverbial cat out of the bag prior to anything being announced by the famously private couple, and has since deleted the post. In all reality, the fashionisto could have just been reacting to the Radar Online story, but it's possible that Biel just couldn't contain herself and had to dish this to him. Subsequently, he had to dish to his followers.

It seems even JT himself might have been getting a bit emotional about a big change in October. Timberlake posted the first picture of himself and Biel to his Instagram, gazing contemplatively off of a mountain four months ago. The picture was captioned with a decidedly sentimental Ferris Bueller quote. "Life moves pretty fast. If you don't stop and look around once in a while, you could miss it."

On top of that — hey, it was a long time before these two actually confirmed the news — Timberlake's fellow *Nsync member Joey Fatone spoke to InTouch in December saying, "[Timberlake] told me a while ago, and I kept my mouth shut. But now I can talk about it! Jessica is awesome, and Justin is a kid at heart. [They’ll have] fun." Well some jumped the gun.

Alright, so let's synthesize all these wayward clues into a prediction. If Biel was three months along in October, this would mean that the couple conceived in July or August. Given Foxman's cover-blowing Instagram post and Timberlake's cryptic picture both happened in October, we can guess that the three-month estimation was true. Plus, there's the fact that she look prettydarn far along in the big reveal Instagram:

Six months from October 2014 is April/May 2015. And that would make Biel around six or seven months along now. Looks about right.

I'm just going to let my imagination run wild for a moment, because a hypothetical May due date calls for one gif, and one gif only.