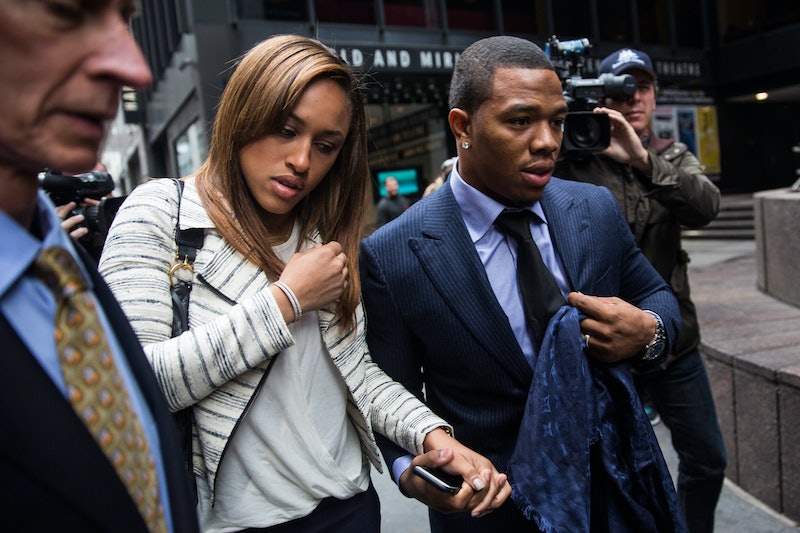 The appeal hearing for former Baltimore Ravens player Ray Rice got underway on Wednesday, and its first witness was a big one. NFL Commissioner Roger Goodell testified under oath Wednesday, though what the embattled commissioner said is anyone's guess. According to USA Today, details of the closed-door hearing have yet to be released, but a source close to the situation told the news source that Goodell's testimony lasted more than two hours.

Rice was terminated by the Ravens and suspended indefinitely by the NFL in September for punching his then fiance — and current wife — Janay Palmer unconscious in an Atlantic City casino elevator. TMZ first leaked the story in February, publishing a video showing Rice dragging an unresponsive Palmer by her hair out of the elevator. The full video, which included footage from inside the elevator, was released by TMZ in September, promptly compelling the Ravens to terminate Rice's contract. Goodell followed up by increasing Rice's fine from a two-game suspension to an indefinite penalty.

Rice now wants to get back into the NFL, seeking reinstatement and arguing that he was given an unfairly severe punishment. According to The Associated Press, Rice alleges that he gave Goodell a specific description in June of what took place in the Atlantic City elevator. However, Goodell has said Rice's description was too vague.

Rice's lawyers are also claiming that the former running back can't be punished twice by the NFL. Rice has also filed a wrongful termination lawsuit against the Ravens.

The AP reports that Ray and Janay Rice are scheduled to testify in New York on Thursday. The couple reportedly spent about 10 hours at the appeal hearing on Wednesday. Ravens President Dick Cass and NFL security chief Jeffrey Mitchell are also expected to testify at the hearing.

Goodell received the brunt of criticism in the Ray Rice case, with numerous critics from domestic violence groups to former NFL players saying the commissioner didn't go far enough with his initial two-game suspension. Goodell was also condemned for not handing Rice a harsher punishment until TMZ leaked the full video — which shows Rice punching his wife unconscious — to the public. The NFL has claimed they didn't see the video until TMZ leaked it in early September, even though an anonymous law enforcement official in New Jersey told The AP that the video was sent to an NFL executive in April. The receipt of the video was confirmed, but it's still unclear who at the NFL office saw it — and when.