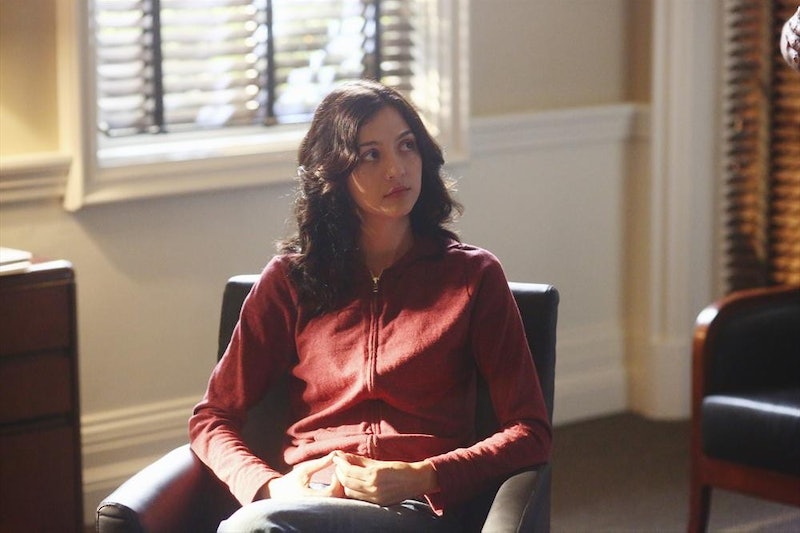 Well, our suspicions were right. The two murders on How to Get Away With Murder were connected all along. They have to be, right? Sam Keating admitted to sleeping with Lila Stangard. Rebecca recognized the wallpaper and correctly identified him as Lila's beau "Mr. Darcy." Though, I'm honestly not so interested in who killed Lila at this point. We never met Lila. The only part of this mystery that I'm interested in is the scratches above Wes's bed because they have to mean something. We wouldn't keep focusing on them if they were not connected to the case in some way. Still, I'm more interested in Sam's murder, because it involves more characters that I care about. Who killed Sam Keating HTGAWM? Honestly, I'm starting to think it was Rebecca Sutter in the study with the trophy. Yeah, I would kill for a HTGAWM-themed "Clue" game. Who do I need to call at ABC to make that happen?

Rebecca may have charmed you with her "Devil may care" attitude. That's a phenomenal phrase, isn't it? I still do think she is innocent when it comes to her drug-dealing ingenue Lila. However, as much as Wes is drawn to her, that girl is a loose cannon. I don't want to goth-shame, but I think she may be the killer after all.

According to the official ABC press release for the Nov. 13 episode, "a shocking discovery is revealed in Lila’s case that could change everything for Rebecca and Bonnie’s loyalty to Annalise." The episode is titled "He Has a Wife." Wait, Rebecca and Bonnie? Why the two of them? What could they possibly have in common? It seems likely that Bonnie is involved in Sam's murder somehow. They keep eyeing each other. We found out last week that she hooked up with Asher — possibly as an alibi? Her and Rebecca being on the same side just means trouble, in my humble opinion.

In addition, I still think a paternity reveal is coming to this show soon. I still think that the joke about Asher wondering if Wes and Annalise were secretly related was a clue about the Lila Stangard case.

She's got dirt on Sam

Sometimes murder is as basic as that. It could just be that Rebecca, frustrated with the way her case was going, threatened to expose Sam as Lila's older lover and he attacked her. The use of the trophy as a weapon suggests self-defense to me. I also have this gut feeling that the murderer was female. Maybe that's sexist of me. Maybe I'm part of the problem. Maybe I'm recognizing a trope in how girls are portrayed.

There is also a discrepancy about Lila's phone that connects Rebecca and Sam that could have lead to an altercation. Sam claims that he spoke to Lila on the day before she was murdered. Rebecca claims that Lila's phone was with her at her apartment all day. Something is up with that. Someone is lying.

"It's all her fault"

That's what Michaela kept repeating about Rebecca. Why? Maybe Michaela doesn't know the whole story about Sam, and thinks that Lila was falsely accusing him. Maybe Rebecca killed Sam using the trophy that Michaela stole from Asher. I'm just guessing that Michaela stole the trophy. I'm also guessing that Connor dared her to do it. I really want the two of them to be friends, OK! Those two could take over the world. Michaela did not seem like she was lying, and that doesn't bode well for Rebecca's innocence.

We'll be finding out who killed Sam in the winter finale at the end of the month. I cannot wait!

More like this
Megan Thee Stallion Actually Auditioned To Be This 'P-Valley' Main Character
By Radhika Menon
15 Photos Of The 'House Of The Dragon' Cast At The Show's UK Premiere
By Radhika Menon
Who Plays Trent In 'Never Have I Ever'? Benjamin Norris Calls His Character A “Himbo Stoner”
By Grace Wehniainen and Radhika Menon
Who Is Tatiana Maslany Dating? The 'She-Hulk' Star Is Married To 'A Locke & Key' Actor
By Radhika Menon
Get Even More From Bustle — Sign Up For The Newsletter