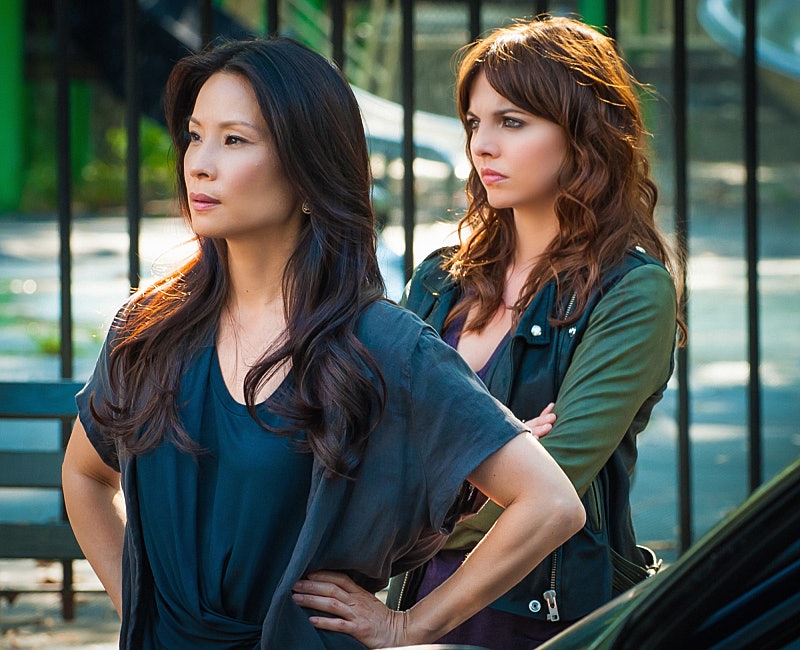 Your favorite Thursday night literary legal procedural, Elementary , is finally back for Season 3. The season premiere gave us a new foe for Watson and a new friend for Holmes. That's right, Sherlock returned from London with Kitty Winter, his new sleuthing companion. She's played by Guardians of the Galaxy's Ophelia Lovibond. Suffice to say, she and Joan did not get off to the best of starts. However, don't jump to any conclusions. The show is actually handling their relationship in an honest, cool way. It's not your stereotypical cat fight. They aren't jealously clawing for Sherlock's affections. Kitty is offended by the way Sherlock keeps comparing her detective work to Joan's. That's understandably frustrating, especially in the workplace. Joan is upset that Sherlock replaced her without saying goodbye. That is also understandable. We don't know much else about this new woman, but what we do know is suspicious.

What is Kitty hiding? According to the official CBS synopsis for Thursday's episode, Joan "attempts to extend an olive branch to Kitty after she learns about the woman's past." In the season premiere, Kitty hinted at some dark reason why she put her life aside to follow in Sherlock's footsteps. Joan described her career change as "moving towards something" rather than abandoning something, and Kitty ominously agreed. What's the deal with that? I've narrowed it down to three general possibilities.

She has a Certain murder to solve

That's why a lot of television detectives get into the business, it seems. Perhaps someone she loved was killed, or wrongfully accused, and she's made it her mission to find the truth herself.

She is running away from a bad situation

Whether it's past crimes or past abuse, this is another way to interpret "moving towards something." According to TVLine's spotlight on Kitty, "she went through a terrible trauma and recovered from it." Sherlock Holmes, in the literary canon, had a team of street urchin-types who do favors for him called the Irregulars. We know this will be referenced soon on Elementary — an upcoming episode is titled "Just A Regular Irregular." Perhaps Kitty is one of them.

She wants revenge on someone

In Arthur Conan Doyle's stories about Sherlock Holmes, there is a character called Kitty Winter in "The Adventure of The Illustrious Client." Miss Winter is the mistress of an evil Baron with a Don Juan streak (he "collects" women and records his conquests). The Baron is also a murderer. Of course. Kitty assists Holmes in bringing him to justice. She kills him, in self-defense, and gets off on a minor charge.

Could this scenario play out on Elementary? We may not see many Barons around in this day and age, but other than that, it's a tale as old as time. Maybe Kitty is in pursuit of the man who wronged her. Or, these events already happened, and Sherlock is the reason she got off lightly. This wouldn't be the first time that Jonny Lee Miller's Sherlock fraternized with criminals.