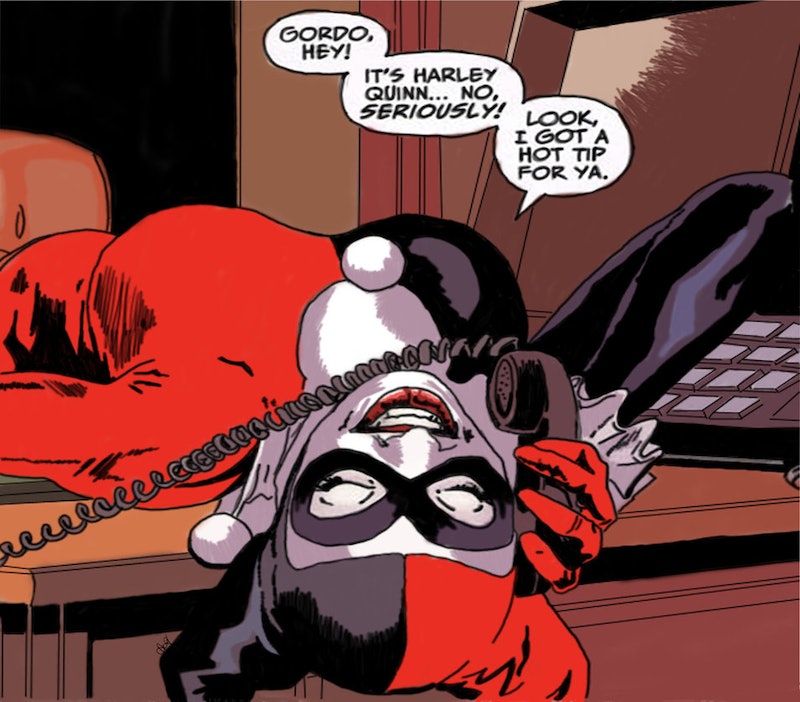 Goddammit, DC. No. Just...stop? For at least a few days? At least let us wrap out heads around one stunt before you pull another one out of your back pocket.

DC Comics — who earlier this week was in the news for banning Batwoman from marrying her girlfriend — is making headlines again for a whole different kind of horrible: They're holding a contest to see who can best draw popular villain Harley Quinn. Preparing to commit suicide. Oh, and she has to be naked.

At least, that's what it looks like. According to multiple very-informed people around the Internet, the bad press around this thing can be pinned on three things: 1) the general anger being pointed in DC's direction this week, 2) a criminal lack of context, and (relatedly) 3) a morbid, physical, and violent humor very typical to the character in question.

DC explained away the marriage debacle — which resulted in the entire Batwoman creative team quitting in protest — a few days ago (hint: it's because all heroes must be miserable to better save the world and drag our hearts through the gravel). Now, seemingly instantly, they've replaced it with...this. Which, to people who are not religious readers of DC, might seem like the kind of thing to get upset about.

The over-sexualization of female characters is a long, persistently annoying tradition of the comic book industry. Mix that in with the also-persistent, even more horrifying trope of the sensationalism of female character deaths (or maimings, or general depowerings), and you've pretty much hit the bull's-eye of the comic industry's capital-I Issues.

A female character facing imminent death, naked, and the company calling for as many people as possible to not only watch it happen, but draw their own interpretations of it? At first glance, it most definitely calls for a very sizable groan at the bare minimum.

DC keyed us up this week with its marriage goof, then set us off with its baffling decision to release these descriptions of Quinn's apparent suicide attempt without any decent amount of context around it. You can see the full descriptions of the panel DC's calling for over at DC Women Kicking Ass, alongside a good, nuanced breakdown of what DC really needs this week. Other than a good PR team. Image: TheMerthyrRiot