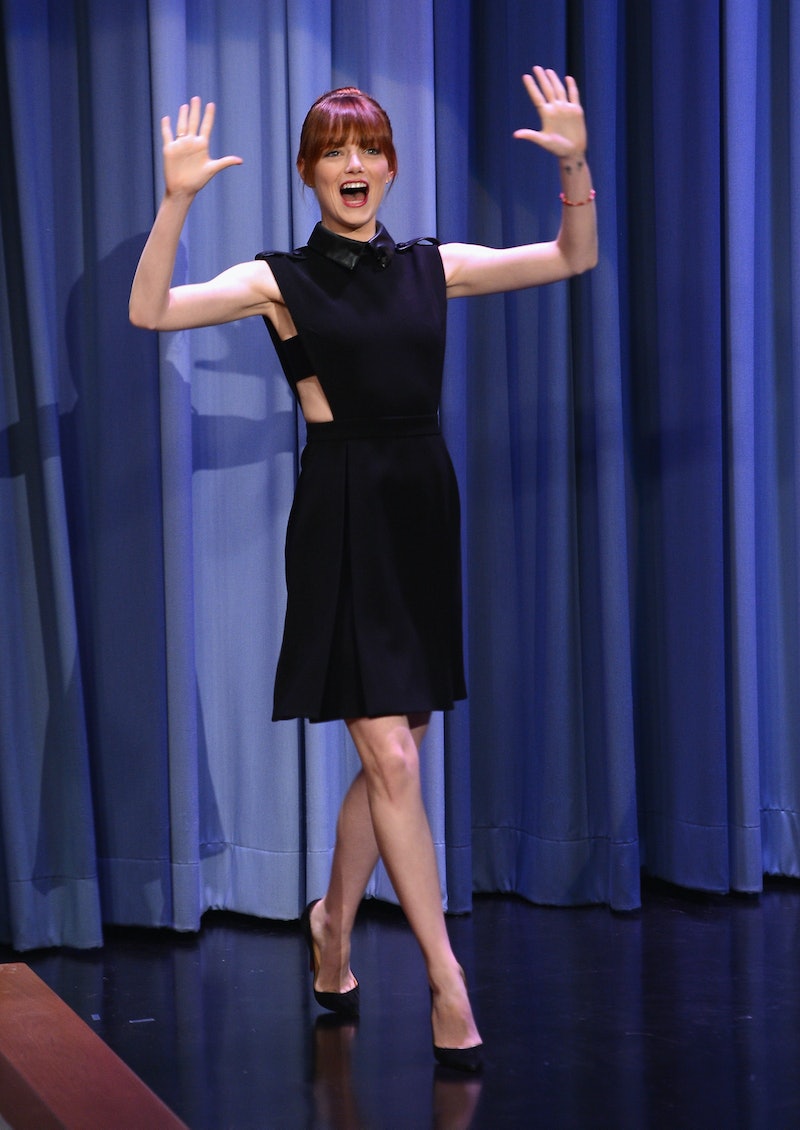 Emma Stone could run for president and I'm sure half the population would vote for her on charm alone. However, there's a lot more to the talented actress, from her empowering quotes to her feminist side — by shutting down misogynistic comments from her boyfriend, Andrew Garfield, no less! — to her undying love for the Spice Girls. Today, Nov. 6, she turns 26, and it got me thinking back to all the times I was overwhelmed with my girl crush. Those instances mostly aligned with when she made the internet a better place with quotable moments and crazy antics like dancing, lip syncing, and even singing. This gal is seriously multi-talented.

To refresh you, I've rounded up eight times that no one could deny her charms. This also includes her suggesting a gummy bear blind taste test with an 8-year-old (don't worry, it was during an interview and his mom was right there) and her explaining why she could never choose between Beyoncé and Taylor Swift. But mostly, it's all about that adorable giggle and how she can make absolutely any situation fun. Life goal: let's all be more like Emma Stone. The world will be a much, much better place.

Stone dances better than all of us, and she can do it in a sneaky way for Ellen DeGeneres. A+.

No one will ever top Stone's lip sync battle on The Tonight Show. Jimmy Fallon has had plenty of other great guests like Joseph Gordon-Levitt and John Krasinski, but Stone's still reigns supreme in my book.

Stone cannot tell a lie, and we benefit from it. She and Fallon should co-host a show, ASAP.

During a fan Q&A, Andrew Garfield made a comment about sewing a costume being "feminine," and Stone shut down his misogyny in a brilliant way.

It's no secret that Stone loves the Spice Girls, and this was seen as she sang "Stop" with Garfield and two radio hosts.

Crying Over Mel B

Mel B isn't even really in the room — she just taped a video message — and Stone was in stitches. It's almost too much to handle. She also sings "Wannabe" toward the end, so don't miss that.

Pranked by Graham Norton... About the Spice Girls

In the culmination of the Spice Girls press tour chats, Stone thought she was going to meet the girl group. Her freakout is next level, especially when she finds out it's not real.

Interviewed by an 8-Year-Old Kid

What happens when you put Stone in a room with an adorable 8-year-old "journalist"? Magic. She even suggests a gummy bear blind taste test.

"This or That" Game

Somehow, Stone managed to talk about boogie time, her love of cheese (and hating acne from dairy), the Beygency, Taylor Swift's wrath, and how she doesn't think Game of Thrones is a real show. Amazing.

More like this
Paul Mescal, Man Of Mystery
By Samantha Leach and Heather Hazzan
UK Viewers Will Have To Wait To Watch The Handmaid’s Tale S5
By Maxine Harrison
The 'Andor' Timeline, Explained
By Gretchen Smail
After The Bling Ring, Nick Prugo Was Embroiled In Another Scandal
By Arya Roshanian
Get Even More From Bustle — Sign Up For The Newsletter